EE to launch first UK 5G service this May

EE and Qualcomm are set to launch Europe’s first commercial 5G network next week, with the service set to go live in six cities across the UK.

EE will become the first mobile operator to switch on its 5G service in the UK, rolling out the service in London, Cardiff, Edinburgh, Belfast, Birmingham and Manchester on 30 May. 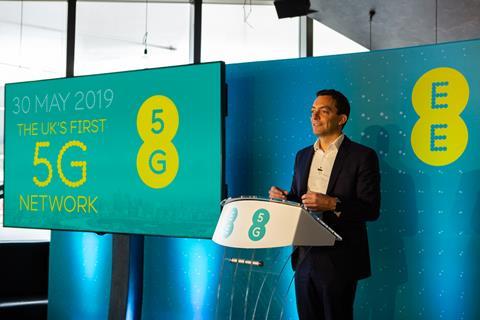 EE announced its 5G roadmap at an event in London and said it plans to upgrade more than 100 new sites every month using band n78, which was auctioned earlier this year.

EE’s 5G network will be built on top of its existing 4G network, offering consumers the benefits from both 4G, 5G and its fixed service, with the BT-owned operator claiming it will deliver “unprecedented download speeds in the UK in 2019.”

EE chief executive Marc Allera promised customers would experience average download speeds of 156mbps. He said: It will be “like having a lane of the motorway all to yourself,” according to Cnet.

Allera confirmed plans for 10 more cities to be added to the 5G network throughout this year with support from Qualcomm Technologies Snapdragon 855 Mobile Platform, Snapdragon X50 5G Modem and its RF Front-End (RFFE) solutions.

UK consumers will have access to the country’s first commercial 5G network and commercially available 5G smartphones by OnePlus, Oppo and LG.

Allera added: “We’re at the bleeding edge of technology with this 5G launch, and that’s exactly where we want to be – enabled by our great relationship with Qualcomm Technologies.

“Adding 5G to the UK’s number one 4G network will be transformative for consumer and business experiences – in 2019, that’s about creating a more reliable, faster experience. In the years to come 5G is going to be woven into every aspect of society, making lives better, easier and safer.”

Qualcomm said it has contributed to industry standards and worked across a roadmap of new technologies and collaborations to expand the 5G ecosystem and help enable industry players deliver the next-generation technology.

PP Foresight tech, media and telco analyst Paolo Pescatore told IBC365: “This is a statement of intent and its aggressive ambitions to rollout 5G should be applauded. More importantly, this is great news for the UK digital communications infrastructure.”

The news follows Google’s decision last week to ban Chinese smartphone maker, Huawei from some updates to the Android operating system following pressure from the US.

Pescatore added: “Lots of uncertainty surround 5G in light of the recent security concerns surrounding Huawei. The lack of any Huawei 5G smartphones is noticeable and a move that makes sense for now.”

Numerous reports recently have raised the growing concerns globally about the role Huawei plays in supplying network equipment to the UK’s mobile operators for their 5G roll-out, following the US’s decision to ban its business in America.

Allera told the BBC that EE does currently use Huawei’s equipment, although it is in the process of removing it from the core of its 4G network.

Pescatore said: “Consumers are starting to be wary about Huawei products and quite possibly other Chinese products. This will have a negative impact on 5G consumer take-up in the short term.”