At IBC2019 there were several announcements about the 8K future. Chris Forrester looks at some of the enthusiasm around 8K. 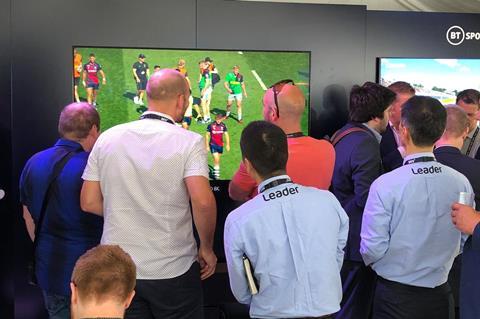 It is easy to understand why satellite operators are enthusiastic about 8K transmissions. The concept of huge, fat and lucrative 2 billion-pixel 8K transmissions is obvious.

However, what is also obvious is the considerable interest at IBC2019 from dozens of technology vendors and enablers regarding upcoming 8K broadcasting.

As readers might know the Japanese have been transmitting – by satellite – for 12 hours a day in 8K since December 2018. Their output is prodigious, and anyone lucky enough to see the results of their work cannot fail to be impressed by the image quality, colour detail and ‘natural’ 3D-type broadcasts.

The cornerstone of Japan’s 8K transmissions is public broadcaster NHK. But they are not alone. Major Japanese broadcasters including Fuji TV, Kansai TV, and others also have their 8K output on satellite as part of a daily schedule of 8K entertainment.

At IBC2019 NHK confirmed that it will also start terrestrial transmissions over the next few years. NHK’s Science & Technology Research Laboratory has already successfully tested 8K terrestrial signals as far back as 2012 using a single UHF channel. More recently similar tests have taken place in Tokyo and Nagoya. The satellite transmission bit-rate, currently around 100 Mb/s uses HEVC as its codec. “But this will not be sufficient reduction,” said IBC365’s source at NHK. “Instead we are focusing on the Versatile Video Codec (VVC).”

VVC is a development of the Joint Video Experts Team and MPEG, and experts say that bit-rates of 30-35 Mb/s should eventually be achievable. The recent 8K tests at the Roland Garros French tennis tournament were run with 5G cellular in mind (and organised by public broadcaster France Télévisions with help from Harmonic, NEC, Huawei, and Samsung).

Work is still being done and a final specification for VVC will not emerge until 2020 and implementation around 2022. NHK intends to also embrace Hybrid Log-Gamma into its 8K signals for backward compatibility.

Harmonic admits there’s work to be done. But also stresses that today’s massive 85-100 Mb/s for ‘live’ 8K is coming down thanks to video compression and that in many instances 8K is deliverable today. At IBC Harmonic showcased their workflow – and results – for the tennis, and described their achievements a representing a “Grand Cru” on their road-map towards 8K.

But they were far from alone. BT Sport did much the same with a live 8K transmission of a Gallagher Premiership Rugby 7s match in Northampton. Another suite of enthusiastic collaborators (including Appear TV (decoding and encoding), AstroDesign (8K Interface Conversion), Blackmagic Design (8K vision mixing), Fujinon and Ikegami (camera equipment), Leader (technical monitoring), MOOV (graphics) and Telegenic (OB support) and Samsung Electronics (Q950R 8K QLED TV)) with BT Sport COO Jamie Hindhaugh admitting that BT was looking at the technology, and saying “that there are 8K displays out there, and people would start to want it”.

8K to boost 4K
BT suggested it will initially use 8K as an aid to its current 4K sports transmissions and zooming/cropping in on a portion of the 8K image for 4K broadcast. There were many sports broadcasters who used a similar strategy during the early days of 4K and for part-capture into an HDTV transmission.

More than a year earlier, in May 2018, satellite operator SES had transmitted an 8K video on a single 36 MHz transponder encoded using HEVC and transmitted at 80 Mb/s. Speaking at the time, Thomas Wrede, VP/new technology & standards at SES Video, said: “Even though 8K resolution is not yet commercially relevant, we have shown that our satellite network is able to deliver 8K content.”

A year later, in May 2019, SES was again busy testing 8K by sending a Spin Digital-enabled HEVC Codec and transmitting at 70 Mb/s directly to a snazzy 82” 8K Q950RB QLED Samsung TV without resorting to a separate external receiver or decoder. 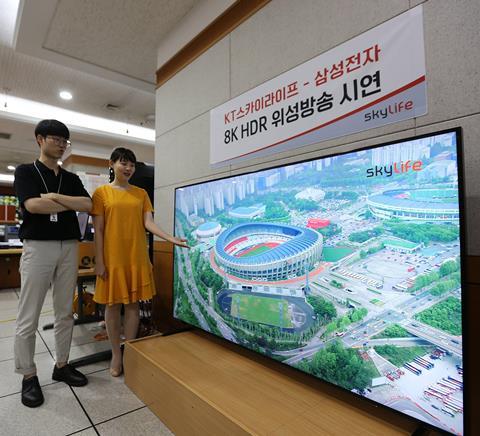 South Korea’s Samsung also tested DVB-S2x and H.265 compression to transmit 8K by satellite and terrestrially (and also demonstrated at IBC), and stating bluntly that 8K transmission was now “commercially viable” even at 100 Mb/s.

It is fair to say that few viewers can afford the prices that the likes of Samsung, LG, Sony or others are quoting for their beautiful mega-displays. Nevertheless, SES CEO Steve Collar reminds customers and viewers that it is not that long ago when a single analogue channel occupied a complete satellite transponder. Collar, speaking at IBC, said he was confident that 8K transmission would happen outside of Japan, China, and South Korea, where significant progress in 8K was already being made.

“It will happen, slowly at first, just as HDTV and even 4K started out. But I was never a believer in 3D!”

Bandwidth demand
SES is preparing for these higher demands on bandwidth, not just in terms of its Network division demands, but also in readiness for its important – and currently mainstream - Video business.

But there are two frequent grumbles about 8K. The first concerns the prices of the displays, and a lifetime of buying the very latest displays (and going back to the earliest days of widescreen analogue PalPlus, for those who remember the technology) right up to the then-latest large-screen OLED from LG, the proof is that as new models get released at CES then prices start to tumble.

Buyers have seen prices of very high-end OLED drop from €4000+ to barely €2300, a drop of one third in just 12 months. Some observers cynically suggest that the rate-of-fall is a deliberate €100 per month. ‘Black Friday’ 2019 prices in the US fell by a further typical $500, and even extremely well-specified Sony 75” LCD units seeing prices trimmed by €200-€300, and ahead of January’s influx of new designs.

In other words, today’s unaffordable (unless you are a Premier League player or Russian Oligarch) giant Sony Bravia ‘Master’ 8K set of $84,999, or a mere £13,999 for the 85” (KD85ZG9) version, will eventually come down significantly in price – which will be needed if the technology is to materialise.

The second complaint is that there’s no 8K content. At the giant MIPCOM programming market in Cannes during October there are nine broadcasters or content producers showcasing their 8K content. While Japan’s NHK offers the most comprehensive range of programming, Korean producers are also extremely active. But there are others, notably India’s Travelxp which is future-proofing content by filming in 8K, as is Paramax Films, The Explorers (already supplying 8K to Huawei and Apple TV), Saint Thomas Productions (supplying natural history footage to many high-end broadcasters) and France Télévisions magnificent coverage of the Roland Garros tennis this summer.

8K will undoubtedly happen in time. Prices of displays must fall substantially, and content producers must ramp up their 8K output. However, it is also worth remembering that Paris is the host city of the 2024 Summer Olympic Games. Do not be surprised to see much more 8K by then.