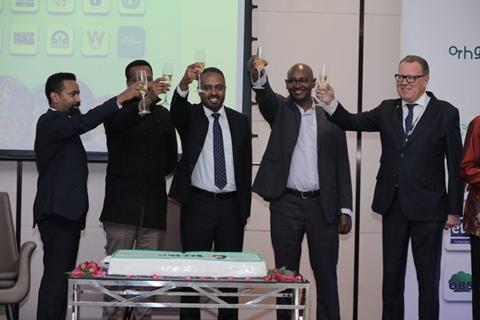 The platform, struck as part of a deal with satellite provider SES, will deliver over 30 channels for Ethiopian audiences only, 12 of which will run in HD.

Ethiosat will be hosted on SES’s NSS-12 satellite at 57 degrees East. It will be made available direct-to-home though local viewers will need to adjust the position of their antenna.

Amman Fissehazion, chairman of the AEB, said, “Up until now, the majority of Ethiopia’s content has been broadcast from an orbital location that also supplies content to Middle Eastern and North African countries, which explains the often confusing mix of content.

“By migrating the most popular Ethiopian TV channels to a new location on SES’s satellite, we’ve created an Ethiopian-only TV offering, that also delivers a variety of channels in HD, a first in Ethiopia.”

The aim of Ethiosat is to bring TV services to millions of additional homes in Ethiopia, with Fissehazion recommending that Ethiopians looking at buying a new TV “purchasing an HD TV whenever possible, as this will allow for higher picture quality.”

Ethiosat will also host new content from both local and international content creators. “We believe consolidating all Ethiopian TV channels and broadcasting them from one orbital position will fuel growth in the Ethiopian media sector, as local networks will now be able to easily expand their audience reach,” added Fissehazion. “This will foster healthy and growing advertising markets, which will result in a greater variety of content, and more localised content.”

Ethiosat was originally announced in May 2017, with Eutelsat named as its primary partner. Ethiopia’s Information Network Security Agency (INSA), in charge of the transformation of the country’s high-tech and security industry, inked a multi-year contract with Eutelsat for capacity on its MENA satellite.

It is unclear if this service launched, or if the contract switched to SES. IBC365 has asked Eutelsat and SES for clarification.

“SES is supporting every aspect of this launch and providing on-the-ground services to ensure the success of Ethiosat, which includes training local installers to correctly repoint the satellite dishes of each TV household to ensure a seamless migration,” said Ferdinand Kayser, CEO of SES Video.

“Ethiosat is bringing a completely new television experience to Ethiopians. We intend for the reliability and quality of the new platform to attract many new viewers, fuelling a bright future for the Ethiopian media sector.”