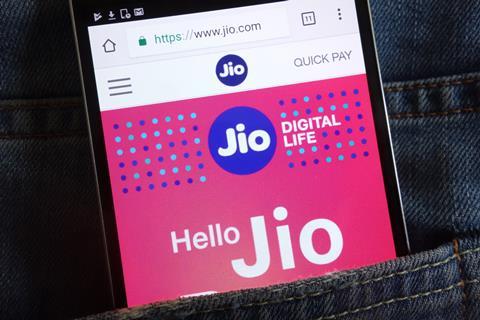 Facebook has invested $5.7 billion to take a 10% stake in Indian digital firm Jio Platforms, marking the social media giant’s largest investment since it bought WhatsApp in 2014.

The deal gives Facebook a key foothold in the Indian market, where it already has a user base of around 250 million users for its main social media platform. WhatsApp counts over 400 million users in India.

The deal will also see a commercial link up between WhatsApp and Reliance’s retail arm, in order to “enable people to connect with businesses, shop and ultimately purchase products in a seamless mobile experience” according to Facebook.

Ambani, who is chairman and managing director of Reliance Industries Ltd, said: “All of us at Reliance are humbled by the opportunity to welcome Facebook as our long-term partner in continuing to grow and transform the digital ecosystem of India for the benefit of all Indians.

“The synergy between Jio and Facebook will help realise Prime Minister Shri Narendra Modi’s ‘Digital India’ Mission with its two ambitious goals — ‘Ease of Living’ and ‘Ease of Doing Business’ – for every single category of Indian people without exception. In the post-Corona era, I am confident of India’s economic recovery and resurgence in the shortest period of time. The partnership will surely make an important contribution to this transformation.”

Jio Platforms, which is owned by India’s richest man Mukesh Ambani, is the digital arm of Reliance Industries and includes India’s biggest mobile operator, Reliance Jio Infocomm, which has more than 390 million subscribers after launching three and a half years ago.

Facebook’s venture is the largest investment for a minority stake by a technology company anywhere in the world and the largest FDI in the technology sector in India. It is also one of Facebook’s biggest ever investments, following the $19 billion takeover of WhatsApp.

It comes at a time when the Indian market is much coveted by technology providers, with close to 600 million people still yet to gain internet access, despite the fact that it is already the world’s second biggest mobile market (behind China).

The agreement underscores the Silicon Valley giant’s “commitment to India” according to a blog post from chief revenue officer David Fischer and vice president and managing director for India Ajit Mohan.

They wrote: “India is a special country for us. Over the years, Facebook has invested in India to connect people and help businesses launch and grow. WhatsApp is so ingrained in Indian life that it has become a commonly used verb across many Indian languages and dialects. Facebook brings together friends and families, but moreover, it’s one of the country’s biggest enablers of growth for small businesses. And Instagram has grown dramatically in India in recent years as the place where people follow their interests and passions.

“We are excited about furthering our investment in India’s vibrant digital economy. Our efforts with Jio will be focused on opening new doors and fueling India’s economic growth and the prosperity of its people. We look forward to working with Jio, and to future collaborations in India to advance this vision.”