Forensic discussion of the Mindhunter workflow 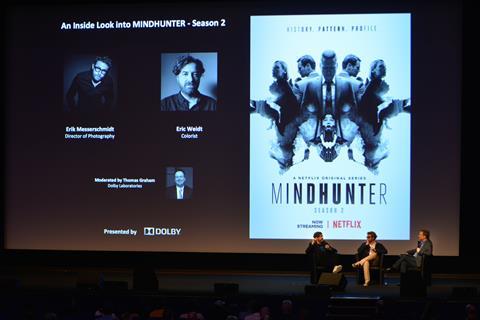 The latest season was lensed in 8K using a Red camera with the Helium sensor and proceeded to a 6K workflow and Dolby Vision finishing.

“Eric and I worked closely on the look, from preproduction to workflow development and colour through post with [exec producer] David Fincher,” Messerschmidt explains. ‘It was pretty close to a film workflow on set.”

He said the aim was to create a vintage ‘70s look for the series that would “feel authentic. Colour is a huge part of that. We played with grain, gate weave, distortion.”

The look took cues from The Parallax View and All the President’s Men.

Weidt related that he works in-house for exec Fincher, and does editorial and some VFX. Dolby’s Tom Graham moderated the conversation.