Game of Thrones: Was The Long Night too dark?

The Long Night, Game of Thrones’ biggest, most expensive, and longest episode to date, has been dogged by complaints of murky pictures and difficult to see action. What, if anything, went wrong? 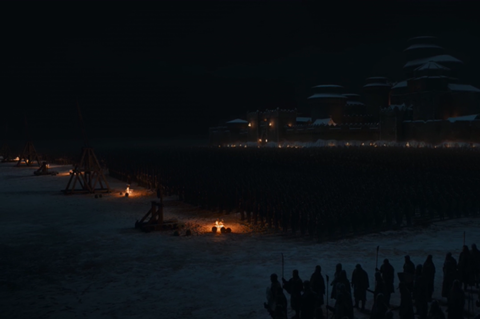 Winterfell Castle: A screen grab of The Long Night

The Long Night was famously filmed over 55 gruelling nights in the depths of a Northern Irish winter and is one of the longest and most expensive battle sequences ever filmed in any medium. But away from the plot twists that were revealed in the 84-minute episode (no spoilers), the main debate surrounding the show has been how dark it looked.

So dark, in fact, that there’s a continuing social media storm along the lines of ‘That must have looked great in the edit suite, but…’.

So, what went wrong? The short answer is nothing. The longer explanation is spilt into two parts; one of which was under the HBO show’s control, the other which wasn’t.

Creative & technical choices
Fabian Wagner was the cinematographer responsible for shooting the episode. “The showrunners decided that this had to be a dark episode,” he told Wired UK. “We’d seen so many battle scenes over the years – to make it truly impactful and to care for the characters, you have to find a unique way of portraying the story.”

Certainly, the air of claustrophobia and menace in the episode justifies that decision alone.

There are, of course, other reasons too. Darkness limits the field of view and means you have to put less on screen in less detail, both in terms of in-camera shots and post production, which can have a positive impact on the budget.

Wagner says that much of the darkness of the episode is simply down to the grueling nighttime shoot schedule, with the rest of the atmosphere produced on set through various lighting choices. This plays down the role of the grade somewhat, but certainly a look at the excellent Behind the Scenes mini documentary that HBO has released on the making of ‘The Long Night’ here suggests that the scenes were slightly brighter on set than they appeared at TX.

Nevertheless, it looks like ‘The Long Night’ was certainly within acceptable parameters from a production and post point of view. The problem really came once it was broadcast.

Compression and bandwidth
The first hurdle ‘The Long Night’ hit was bandwidth. All TV programmes are compressed for transmission, with the quality of the decoded picture at the viewer’s end lately dependent on the bitrate of the video signal. In the US it appears that many viewers had to watch the episode at bandwidths that struggled to convert an appropriate amount of information to a decent picture. 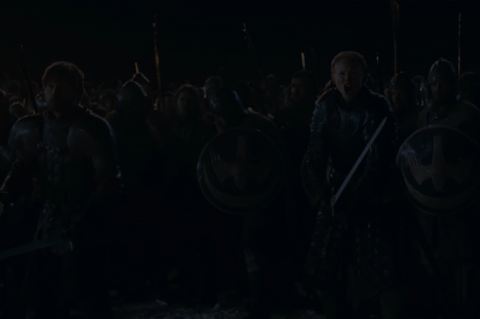 Dark scenes: A screen grab of Jaime Lannister and Brienne of Tarth as they prepare for battle

HBO Now and HBO Go broadcast GoT at something close to 5Mbps. By comparison, a Blu-ray Disc version of an HD show will have a bit rate of up to 40Mbps, which shows you just how much picture information was missing. A much better bet seems to have been Amazon. This also streams HBO as part of its Amazon Channels add-on package, but streams video at something closer to 10Mbps, resulting in a much clearer picture.

The satellite broadcast, at least in the UK, seems to have fallen between the two. Sky Atlantic HD broadcasts on Astra 28.2°E, and, looking at the data from the satellite, TX of the episode took place at the normal level for dramas on Sky of around 7Mbps. There was definitely some noticeable banding in the long shots (and effect exacerbated by the limited colour palette of the episode) and a certain amount of picture break up in the more chaotic battle scenes, but it was watchable.

Even more watchable though is Sky’s downloadable catch-up version. By way of comparison, the HD broadcast version of the episode takes up 3.5GB disc space; the download version takes up 8.3GB and the picture is as improved as you would expect.

TV settings
The last problem viewers faced was their televisions themselves. “A lot of the problem is that a lot of people don’t know how to tune their TVs properly,” says Wagner. “A lot of people also unfortunately watch it on small iPads, which in no way can do justice to a show like that anyway.”

By tuning, of course, Wagner means calibration. Obviously motion smoothing needs to be off (see boxout), but care also needs to be taken with the brightness levels of the picture and, perhaps even more crucially, with the lighting of the viewing environment. Much is written about the cinematic quality and cinematic sensibility of modern high-end television; providing it with cinema-esque lighting seems only reasonable.

Watch ‘The Long Night’ on a good television, properly calibrated, in a darkened room, and at a good bitrate, and it looks as stunning as you would hope. As well as raising the bar on battle sequences, perhaps the episode’s lasting legacy will be igniting a debate on how we get to that point of optimum viewing conditions in the home.

Please adjust your set
This is not the only high-profile recent furor about television settings. Tom Cruise and director Christopher McQuarrie released a video at the end of last year pleading with viewers to turn off motion smoothing to watch ‘Mission Impossible Fallout’. While Cruise has probably never delivered a line like ‘We want to talk to you about video interpolation,” in his life before, the video has definitely helped highlight the problem. 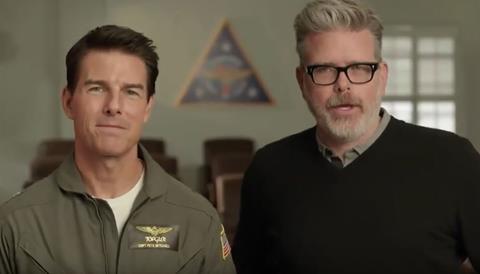 Motion smoothing is useful for watching sports, but the way it adds extra frames into the signal has an impact on films that can best be described as unfortunate; changing colours and degrading image quality. The problem is that most modern sets tend to ship with motion smoothing turned on, and the facility to turn it off is usually buried somewhere in a sub menu (plus, until the brain gets used to it, 24p looks decidedly weird for a while).

“Filmmakers are working with manufacturers to change the way video interpolation is activated on your television, giving you easier access and greater choice on when to use this feature,” said Cruise. Possibly if that had been set to off for ‘The Long Night’, the angst about it all might have been shorter.