Jonathan Bramley is a busy man. As Executive Producer of the BBC coverage of the inaugural European Championships he needs to win gold at logistics and be ace at juggling too.

Glasgow and Berlin were the co-host cities, with host broadcasting and distribution services provided by Eurovision Media Services - and its subsidiary Eurovision Production Coordination (EPC). Co-ordination through the EBU member network meant that almost 40 broadcasters are covering the sports from 2 - 12 August.

Based in Glasgow for this multi-discipline wonder, the BBC treated the European Championships like a big event. The transmission galleries and post production were at BBC Sport in Salford, but the BBC main studio was in George Square in Glasgow, right in the middle of the carnival atmosphere of Festival 2018, which ran during the Championships.

“It works very well actually,” says BBC Executive Producer Jonathan Bramley during the Championships. “It’s nice to be somewhere where you can feel that there’s a lot going on at all times of the day. We were here for the Commonwealth Games four years ago and our studio was at BBC Pacific Quay because there was plenty of things going on there then.

”It was great that the organising committee, Glasgow 2018, had this idea of making George Square a kind of central hub with lots of entertainment on there, bringing life to the event as well. We’ve tapped into that and managed to get some of that across.”

The eyecatching design of the studio has prompted a few viewer comments; the glass wall behind the presenters provides a (closed) window onto the festivities. 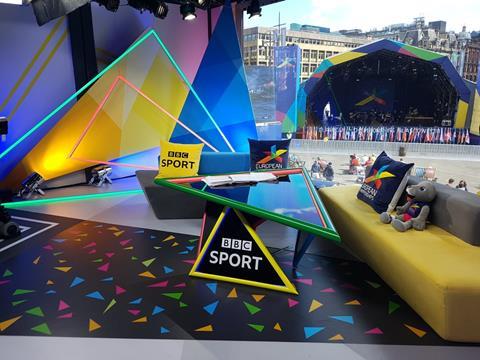 “It’s a bit of a challenge trying to present a sports programme in the studio when you have a concert going in the background,” Bramley admits.

“Fortunately, we did plan to make sure all the sound proofing was as good as it could be. At least if you can see what’s going on, it helps the viewer explain why there might be drumbeat going on behind Clare Balding.”

Bramley is a busy man. He is the exec producer in charge of output - which encompasses everything from putting forward the finance case in the early stages to scheduling team deployments at the venues on a daily basis, and even jumping on a console or two to help out operationally. Bramley’s big production plan, in the form of an Excel spreadsheet, is very big indeed.

“It’s a challenge to make sure you’ve got the best sport on network, probably BBC One and BBC Two, and then make sure that what you’re then putting on the Red button is keeping everyone happy.”

“Putting that plan together is where you rely on your experience of these events,” says Bramley, speaking to IBC365 at track-cycling venue the Sir Chris Hoy Velodrome.

”There’s obviously a lot of co-ordination with the host producer because that’s where you’re going to be relying on all of your venue services, and then clearly there’s infrastructure that you might need to build in the broadcast centre as well.”

The result was ten days of coverage, from 9am to 9pm across BBC One and BBC Two, as well as the red button service. The European Championships figured quite significantly on the BBC website and social media platforms as well.

Two edit suites were in operation at Pacific Quay. “Any material that’s shot here will tend to be edited here,” says Bramley; the post team at Salford has contributed the slick openers and closers and tends to work with a combination of archive, interviews and other material that was shot in the run up.

Signpost to sport
As well as logistics, the challenge is keeping the viewers happy. “You can’t necessarily show every second of every sport, certainly not on network,” says Bramley. “It’s a challenge to make sure you’ve got the best sport on network, probably BBC One and BBC Two, and then make sure that what you’re then putting on the red button is keeping everyone happy.

”A good example is the women’s road race on the first Sunday. When it started we were still at the Velodrome. So we showed the end of the track cycling on network, and start of the road race on red button. We were then showing gymnastics live, and so occasionally we’d update viewers on BBC Two that the road race was being shown continually on the red button. 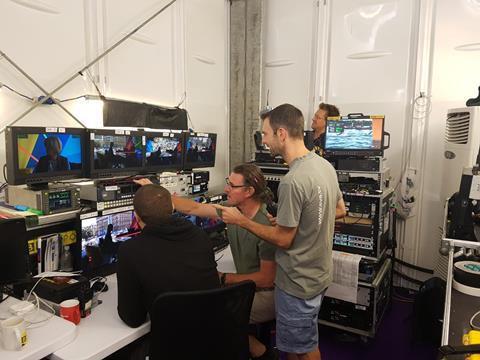 “It’s continually signposting people to what’s coming up,” continues Bramley. “People don’t necessarily know what’s on when. You’re on for 12 hours a day, so for those who aren’t going to sit and watch it all day, what are the important bits? What shall we point them to? We also need to make clear what we are showing and what the alternatives are on the red button. On iPlayer we wanted to make it a priority to segment all the sports, to make it easier to find all those bits viewers want.”

The EPC facilitated all of the OB and venue infrastructure; the main IBC is in Berlin, with a broadcast operations centre (BOC) in Pacific Quay. For the BBC and other broadcasters, it’s been a case of determining the amount of budget to invest in the venues, and how many venues they want to have live capability.

“For events where we’re continually going back to the venue for interviews in between races, such as swimming, track cycling, rowing, gymnastics, we booked some dedicated circuits to allow us to do that. The only cameras we tend to have at venues are mixed zone cameras, which are fairly standardised. So we’re allocated a position there and as home broadcaster, we’re lucky to be in position number one.”

For some of the other venues the BBC took the decision to rely on bonded cellular technology. “We’ve got three Wireless Multiplex Technology (WMT) units we’ve been using for some of the outlying events,” explains Bramley.

“For the road cycling for example we were relying on the WMT to get interviews back. They’re obviously subject to the quality of signal but it wasn’t essential that they were necessarily live, so we could easily record and replay.

“The camera operator had a fixed position for the road race, but with, for example, synchro and open water swimming, golf and mountain biking, we haven’t got positions there - we’ll just be taking the mobile units with us.”

The technology was also used as a failsafe. “In the event of any catastrophic failure we actually have a WMT unit fired up at the studio. We can take a camera back to Salford via a different path, so we’re happy about that,” says Bramley. “Another failsafe is that we have host commentary in place for every event, so if we had a problem with a commentary position, the fall-back would be that we could take host commentary.”

Another use for the WMT mobile camera has been to boost the broadcaster’s street cred. “We’ve had Tom Daly here as a reporter for us. He’s brought a very different kind of feel to it. We’ve sent him off with one of the cameras and we’ve edited a couple of features here – one was a special version for Instagram, targeting the a more youthful audience.

“Primarily we want to show the sport the best we can, with the best experts we’ve got,” says Bramley.

“We also don’t want to lose out on an opportunity to appeal to a younger audience – those are the people we hope will be watching BBC sport for many years, so using someone like Tom has brought a different side to the coverage. Hopefully it will bring in some of his two million followers on social media to something we do.”