How Henley is rowing up the stream

Henley Royal Regatta has seen a growth in entries and interest after it opted to live stream its races through YouTube. Ian Volans looks at the 180 year old rowing event’s streaming strategy. 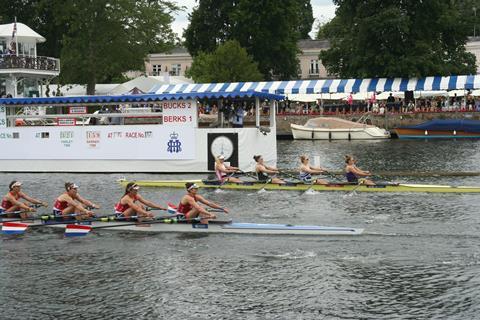 The Progress Board has been informing spectators of the status of each race for decades. Today, it also provides a camera position for the YouTube coverage.

Many “minority” sports, excluded from mainstream television by the dominance of various football codes, cricket, tennis or golf, see live streaming as a means of building their own audiences. One 180-year old English sporting institution is in the fortunate position of being able to play a long game with its broadcast initiative.

Five years in, Henley Royal Regatta’s award-winning rowing coverage which started as a YouTube channel is going from strength to strength. Up to the start of the 2019 Regatta, rowing enthusiasts around the world have watched over 50 million minutes of coverage online. YouTube is now being complemented by linear broadcast: BT Sport has carried the final three days live in the UK since 2016. 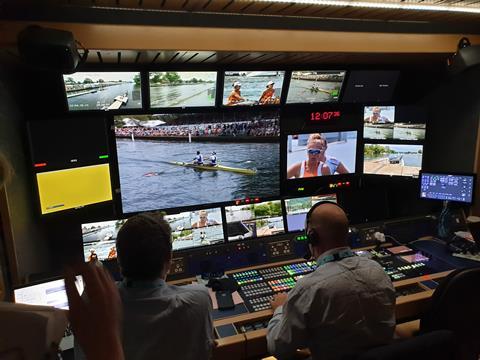 Founded in 1839, the Regatta attracts 300,000 visitors over five-days of the first week of July to the Oxfordshire town of Henley, 60 km west of London.

The event has been influential in the history of world sport. Pierre de Coubertin, who attended in 1888, described its organisational structure of a self-electing body of stewards, a Committee of Management and a Chairman as “three concentric circles” and adopted it for his International Olympic Committee.

Today, the volunteer 61 Stewards who run it act as its custodians. Their rowing credentials are impeccable: 21 have competed in the Oxford and Cambridge Boat Race (which itself was first raced at Henley in 1829); 29 at world championships with 27 Olympians who have won 35 medals including 18 gold between them.

Unique course
Henley Royal is unique on the international rowing circuit. Unlike the Olympics and World Championships which are held on six-lane 2000 metre still-water courses, races at Henley are head-to-head gladiatorial contests on an upstream course over 1 mile 550 yards - or 2112 metres - of the rural river Thames. 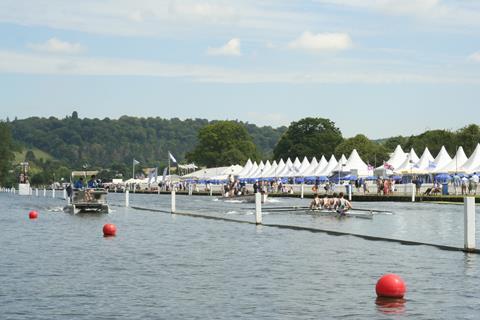 A catermaran follows the crews for the first third of each race.

Henley offers 24 events across multiple boat classes for rowers of both genders from junior through collegiate and club to national squad levels. In 2019, the Regatta attracted 660 entries of which a quarter were from outside the UK. Qualifying races whittled the entry down to 354 crews to contest the 330 races. This intense competition means that getting to the start line for a first-round heat is an achievement in itself.

Return to the small screen
Since being shown on the BBC in the 1960s, apart from a brief experiment in the early 1980s to show racing on closed-circuit screens in the grandstands, the regatta has not been screened for 50+ years.

When Neil Chugani, who had previously worked at Sky and the BBC, was elected a steward at the end of 2012, he was asked to investigate the options for broadcasting the Regatta.

The unrivalled reach of YouTube was identified as the quickest way to share Henley with the rowing community worldwide while enabling the Regatta to retain editorial control. The initiative was signed-off by the Committee of Management shortly after five-times Olympic champion Steve Redgrave became chairman.

“Henley Royal Regatta has been a passion project for Sunset+Vine.” Andrew Preece, Sunset+Vine

Chugani led the search for a production partner. Experience of covering water-based sports gained on yachting’s America’s Cup was one factor in the appointment of Sunset+Vine.

“Henley Royal Regatta has been a passion project for Sunset+Vine ever since we first set foot on the snow-clad banks of the River Thames five years ago to begin developing the camera plan!” says executive director Andrew Preece. He worked closely with Chugani, Redgrave and four-times Olympic champion, steward, umpire and BBC sports broadcast journalist Matt Pinsent to arrive at a plan that allowed the racing to be presented as competitors experienced it and with production values that reflected Henley’s status and traditions.

Focussed investment
Modest compared with a typical Premier League soccer match, the Regatta has focused its production investment on covering the course with eight HD cameras. 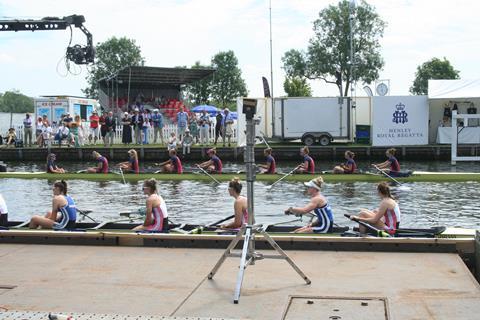 A gib on a pontoon in mid river captures the tension at the start.

A gib is used to capture the tension of the start from a variety of angles. A camera mounted on a catamaran picks up the crews as they come out from behind Temple Island and follows them up to “the Barrier”, the first timing point at just under one-third of the full course distance. A cherry picker reaches out from the Oxfordshire bank at “Fawley”, the second timing point at halfway, providing elevated shots through the middle of the races.

The “Progress Board” camera captures the crews against the colourful backdrop of the Stewards Enclosure as they sprint over the final 150 metres while a camera in the judges’ box tracks the crews into the finish line. A super slo-mo camera, just after the finish line, captures the emotion of the finish – the jubilation of the winners and the exhaustion and pain of the losers – with footage being used live and in closers and openers.

One camera, on a Cineflex giro-stabilised mount, is fitted on the bows of one of the fleet of umpires’ launches. A Sennheiser 816 directional mic is mounted alongside the camera to capture the sound of the oars catching the water at the start of each stroke.

Between Wednesday and Saturday racing spans 11-12 hours. Lunch and tea intervals provide much needed respite for production crew and officials.

With each race lasting between six and nine minutes depending on boat class and conditions, two races can be on the course at the same time during the first three days, so all starts are recorded and at the end of one race, the production team cut to a replay of the start of the next before cutting to live coverage of the race further along the course.

Races are in timetabled in blocks of five – to allow for the circulation of the umpires’ launches. Races that are likely to be the most closely contested or have interesting back stories are scheduled “at the top of the block” to be followed by the launch mounted camera.

Enter the drones
Critical to the success of the initiative has been the drone camera. After its pioneering first appearance in 2015, the drone crew were recruited to cover the Olympic regatta at Rio 2016.

Given the close proximity of large crowds, the two-man drone team of pilot and camera operator have to satisfy strict regulations set by the UK’s Civil Aviation Authority. Many of the drone’s critical systems are duplicated for redundancy and the aircraft features many failsafe features.

The drone is flown from mid-river platforms and is restricted to the course which is demarcated by piles and wooden booms and is under the control of the Regatta. Two generators power four chargers that keep ten batteries topped up.

The boss flying the beast. Awesome work from Steve Peters last week. Thank you @spfilmsgb for five years of partnership on this journey. pic.twitter.com/l6lq2o797W

Peters’ own Freefly Alta 8 carried a Sony P1 which can be matched much more closely to the other broadcast cameras than was possible with the DSLR used in the first year. Much research uncovered a new 22:1 broadcast quality zoom lens with full remote iris control which has replaced a 3:1 zoom used in previous years and allowed much tighter shots of individual crews. 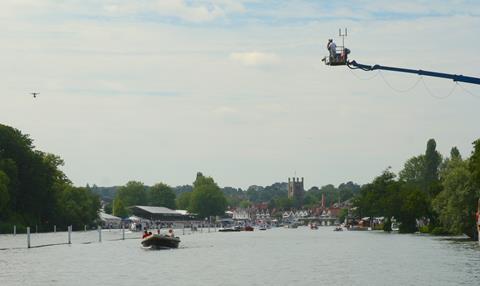 A cherry picker provides elevated shots through the middle of the course.

The new drone is also quieter than its predecessor and with lighter lower density batteries, flying time has actually been extended to around 10 minutes between battery changes. This allows a race and a half to be captured between battery changes when races are every five minutes. All drone footage is recorded directly to EVS to make it easily accessible.

Apart from the eight course cameras, there is a single roving reporter camera capturing shots around the boating area where crews go afloat and return after their races. It’s also used to record introductions and links for the daily highlights programmes which are fronted by Matt Pinsent. For their live coverage, BT Sport brings three additional presentation cameras.

In the early years, all the cameras were RF-linked. This year, the Progress Board, Finish and post-finish cameras are on fibre laid along the riverbed to Regatta Headquarters a few hundred metres upstream next to Henley bridge. Regatta HQ acts as Sunset+Vine’s production base and is also the receiving point for the RF links used for all other cameras.

When the technology matures and network coverage arrives in Henley, the Regatta could be an interesting use-case for 5G contribution links although range could be an issue at the frequencies in which 5G is currently being deployed in the UK. 5G’s “network slicing” functionality than can guarantee bandwidth and latency will be essential.

Two OB truck from Timeline TV are deployed. One is used for the YouTube world feed which is linked back to a streaming control platform in the basement of Regatta Headquarters. The second takes the world feed and overlays the BT Sport presentation before it is sent to BT Tower via satellite.

Social media clip production for every race is produced remotely by Tellyo who are linked by fibre to Sunset+Vine’s headquarters in Hammersmith, west London. All content is watermarked so that usage can be tracked.

“Every cameraman out on that course has made himself available for this week to work 12-13 hour days on the water, in blistering heat, because they are so proud of what they’re doing.” Sarah Greene, Sunset+Vine

Given the number of races the production team has covered - 1539 by the end of the 2019 Regatta – Sarah Greene, Sunset+Vine’s Executive Producer for the Henley world feed, reckons they have the most experienced rowing production team in the world.

“We have had the same team on the cameras, in the back room, in the truck working on this regatta since we started,” says Greene. “Every cameraman out on that course has made himself available for this week to work 12-13 hour days on the water, in blistering heat, because they are so proud of what they’re doing.” Including riggers during set-up, around 100 people are involved in the production.

Strong growth in HRR viewing on our digital channels this past week. Fascinating that for the first time the majority of the viewing comes from overseas. US/Ned/Aus/NZ/CHN all getting some HRR viewing.

The evidence suggests that the Regatta is building a loyal international audience among the small but passionate rowing community. This year, for the first time, more than half of the YouTube audience was outside the UK. Demand for content from news and documentary producers is also growing.

There are other metrics that are important to the Regatta. “The uptick in entries has been dramatic because of the broadcast coverage. We’ve always had entries from Europe, America and Canada but now we’re getting people coming from Australia and New Zealand in numbers and in quality that we’ve never had before,” said Pinsent.

“The uptick in entries [to the Regatta] has been dramatic because of the broadcast coverage.” Matthew Pinsent, Olympian

This year overseas crews won 13 of the 24 events. Winners came from as far afield as New Zealand, Australia, the USA, and Argentina as well as Germany and the Netherlands. History was also made with the first Chinese winner.

Greene’s hope is that in five years’ time, the regatta will have “an IBC here pumping out live feeds around the world.” She would also like to be do more with data coming off the course, as Sunset+Vine does with some other sports. “We’re open to using any bits of technology that becomes available to us, but it has to happen in a non-intrusive way,” says Greene.

By playing the long game, this 180-year old and most traditional of events is carving its own niche in sports broadcasting.