The challenge of dealing with Trump’s alt-fact ‘ripple effect’

IBC2017: Donald Trump’s tweets, fake news and the future of artificial intelligence in newsgathering were all on the agenda at the first day of the IBC Conference. 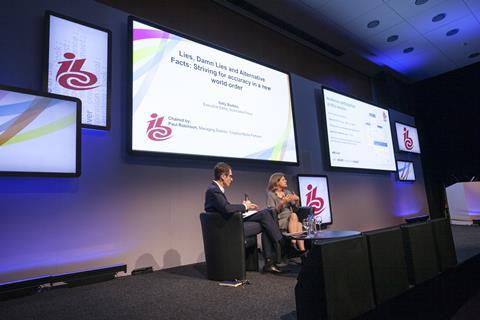 In a candid ‘fireside chat’ on the opening day of the Conference, Associated Press Executive Editor Sally Buzbee said: “Maybe people think that Trump’s willingness to tweet inaccuracies has led to a ripple effect in fake news.

“We see in the US states a bit of a ‘follow my leader’ issue. There have been tweets that say China is creating a hoax about climate change, and Obama ordering a wiretap– these need to be called out as having no factual basis – it’s very dangerous territory if the media does not call out what is factual.” 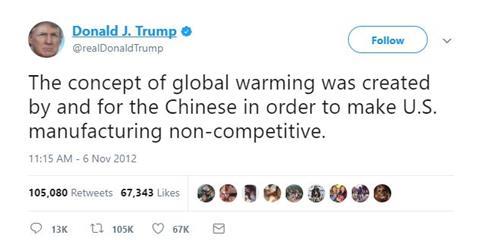 The 171-year-old non-profit news agency AP has faced a variety of challenges in covering the Trump administration.

In conversation with Chairperson Paul Robinson during the ‘Lies, Damn Lies and Alternative Facts: Striving for accuracy in a new world order’ session, Buzbee said: “It is very challenging to deal with a President who tweets in real time – we had to change staffing hours in order to cope.

“Another example was when Trump tweeted about banning transgender people from the military. We immediately got in touch with the government to find out what the new policy was, and they didn’t know.

“They knew the President was interested in the question of transgender people in the military, but President was saying one thing on Twitter, and the government wheels had simply not caught up.

“On the flipside, his ability to generate populist appeal is very important for him politically – he’s able to channel what his base thinks on a daily basis, which is an enormously powerful and effective political tool. However, we as journalists have to insert qualifiers and provide context. We’ve really amped up on that of late!” 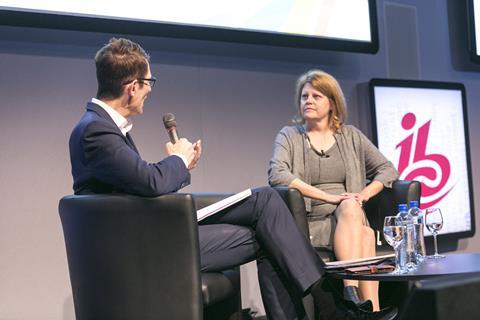 ”The accusation is often that mainstream media can be too far away from what people are thinking, and be seen as too elite.”

AP is working with Facebook to highlight ‘fake’ news as the conversation happens on the social channel. Reporters from AP can fact check trending stories and attach their findings to the topics, actively flagging inaccurate, incomplete or just downright invented news.

The widely publicised White House briefing bans saga – where reputable media outlets including the Guardian, the New York Times, Politico, CNN, BuzzFeed, the BBC and the Daily Mail were denied access to a White House Q&A session – was also covered. Associated Press journalists were invited but boycotted the briefing.

“We fight for access to governments, from China, to Belarus, and it is shocking to have to do some of that fighting in the democratic US.

While much debate was devoted to the challenges around current Washington policy reporting, new technology got headline billing as a key facilitator of better, more accurate journalism.

“Technology has the potential to help accurate reporting enormously”

“As a journalist what most excited me is the potential for artificial intelligence to help us in deeper reporting. That could be something as simple as sorting through reams of data to find a campaign finance story or report more deeply on pollution, for example, it helps us with fact checking too, and vet user generated content.

”There is a tonne of opportunity for us to tell deeper and more fact-checked stories with AI. But it’s important that it is in no way substitute for journalists, it’s potentially a fantastic tool for journalists to deepen their work, not a cost-cutting measure.”

VR also entered the conversation, but both Robinson and Buzbee agreed that the current scope for VR is limited.

Buzbee: “I tend to think about VR as a factual annotating tool, useful to explain what a something looks like from a different angle or situation, for example, at a political convention, touring a new technology innovation, or in a refugee camp – VR has that ability to immerse people. It can be overused too. You are really looking for those situations where some form of deeper visual information is key to understanding the story.”

For all the challenges highlighted by the discussion, the conversation ended on an upbeat note, with Buzbee offering a brief insight into the future: “The future of newsgathering will be all about making information accessible, it really can’t be dry. The biggest challenges are around making sure the world actually cares about facts, and also building a monetisation strategy around that!”