In search of next gen broadcast media storage

At IBC2018, Rohde & Schwarz introduced a new multi-user shared access storage system: R&S SpycerNode. In this article, we take a closer look at SpycerNode to see how its approach differs and where this might add value to broadcasters, content owners and facilities.

SpycerNode represents the first in a new breed of storage turnkey systems that harness the latest advantages in High Performance Computing (HPC). HPC is a term mainly used for massive server infrastructures in various super-computing and other highly sophisticated applications. In terms of storage it refers to the system’s performance, scalability and redundancy. 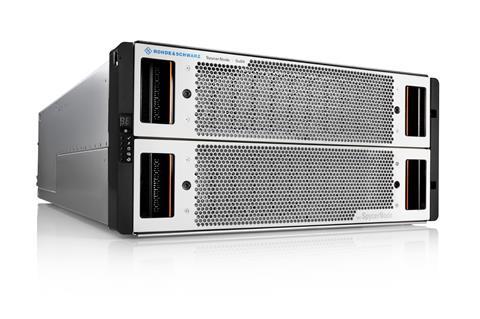 In developing SpycerNode, Rohde & Schwarz engineers have looked at many of the key issues that impact on media storage systems within high-performance video editing environments. Sometimes, these can take the form of annoying maintenance requirements – such as defragging – which cause system performance to drop off. Or it can be much more serious system failures, such as dying disk drives, which can have catastrophic consequences to a project that is being worked on.

“Rohde & Schwarz are already a strong presence in high-performance storage and SpycerNode will strengthen and increase its presence,” comments Rupert Watson, Sales Director, Production and Post Production, Jigsaw24. “The most compelling aspect of the SpycerNode is its building-block characteristics. It provides the ability to build a single global name space with different speeds of storage node.”

So where does this inherent system flexibility come from? SpycerNode comes in three different chassis. 2u12 and 5u84 which are available with NL-SAS HDD and SAS SSDs in different capacities. An additional 2u24 chassis design is a pure flash system. There are main processor units and JBOD units. A main unit is always redundant, equipped with two appliance controllers (AP). Each AP features two 100 Gbit interfaces resulting in four 100 Gbit interfaces per main unit.

The combination of different chassis systems makes SpycerNode applicable to a very broad range of applications. The 2u system represents a compact, lightweight unit that is appropriate to applications where space-saving is an important issue. The system is ideal for application within OB Truck environments as well as offering a very dense, high speed storage device for on-premise applications. The larger 5u system offers heavyweight storage facilities on-premise within broadcast production centres and Post facilities.

Erasure coding boosts data security
An absolute requirement of any high-performance video storage system is proven data security. Data losses in the middle of projects have catastrophic consequences and must be avoided at all costs. In developing SpycerNode, Rohde & Schwarz has made a significant progression in this area. SpycerNode data protection is based on erasure coding and declustering.

Erasure coding means that a data block is always written including parity, while declustering spreads a spare drive virtually over all the other drives in an array.

For the first time, SpycerNode develops data awareness. What does this mean - in case of a drive failure all drives are contributing to the rebuild plus the system only needs to rebuild the data that has been written to the affected disk unlike traditional RAID where all drives are writing to one spare disk which has to be rebuilt completely, no matter if the system has a filling level of 10% or 80%. This can lock up the storage system and cause rebuild times up to several days.

Compared to conventional RAID systems, SpycerNode implements a sophisticated data and spare space disk layout scheme reducing the overhead to clients when recovering from disk failures. To accomplish this, SpycerNode uniformly spreads or declusters user data, redundancy information, and spare space across all the disks of a declustered array.

Erasure coding, in contrast to RAID breaks, expands and encodes user-data into fragments including parity information. Typically, the Reed-Solomon erasure-coding algorithm is used to calculate the parity, which essentially is forward error correction. SpycerNode is set per default to 8+2p that means a data block is segmented into 8 data and 2 parity strips.

This significantly decreases rebuild times and reduces performance impact during that period. There are no limitations with the RAID controller as well, which results in much higher IOPS (Input/output operations per second).

Declustering is a part of the data protection approach of HPC setups (formerly know as RAID). It is software based and in comparison to a traditional RAID setup, the spare disk is spread over all other disks and is not a dedicated disk. This decreases rebuild times and reduces performance impact. Also, there are no limitations with the RAID controller, which results in much higher IOPS (Input/Output operations per second). Importantly, there is no impact on system performance over time due to declustering.

One big advantage of the SpycerNode software data protection mechanism is that the system has no single point of failure, Compared to a classic hardware RAID approach this brings multiple benefits. First, much faster rebuild times of up to a factor of four, and less impact on performance during rebuild. Also, full redundancy is possible from the smallest unit.. Additionally there is no impact on performance due to fragmentation: the system scatters the data ensuring an even flow of data, in any application scenario Finally all system components, such as power supplies and cooling units, are redundant to ensure maximum uptime.

“The most compelling aspect of the SpycerNode is its building-block characteristics.” Rupert Watson, Jigsaw24

Data security designed from the ground up
SpycerNode has several propriety features that are designed to enhance data availability and security. SpycerNode features an end-to-end Checksum mechanism to prevent silent data corruption. Every time a data block is written a checksum is created and written to disk. When the data block is read another checksum is created and compared to the original one. If both checksums match data is delivered to the application. If the checksums don’t match the data block is recreated out of the parity and the newly created checksum is compared once again with the original one. If they match, the corrected data is delivered to the application and the faulty data block on disk is corrected with the parity information.

Decreases in the performance and integrity of drives over time is a major issue in arrays of disks. Disk drives normally do not drop out instantly - it can take a significant amount of time until a drive is considered to be faulty and removed from the SAS bus.

Data corruption and slow overall performance could be caused by a single “dying” drive. In order to prevent this SpycerNode features the Disk Hospital which constantly measures the average technical performance of a drive. If a certain threshold is exceeded the drive is removed from the array and replace by the spare drive.

Fragmentation has a huge impact on the performance of traditional storage systems. Pre-allocation and defragmentation may help to maintain or to restore acceptable values, but the storage will never perform as it did on day one. Additionally, defragmenting takes time and locks up a system for productive access. However, it is not advisable to fill up the storage more than 80% since the data is written to the outer sectors of a disk which slows down performance as well.

Device Manager – system setup has never been easier
SpycerNode features Rohde & Schwarz‘s device manager web application which is a proprietary technology that makes it much easier to set up and use Rohde & Schwarz solutions in an integrated fashion. With device manager, all Rohde & Schwarz systems on a network can be operated via a single interface. Complex console configurations and laborious maintenance work are no longer necessary, allowing users to focus on their creative work.

Device manager helps to reduce setup times and simplifies maintenance and service due to its intuitive web-based UI operated through a single client.

Firstly, it allows online scalability in bandwidth and capacity – a feature which significantly enhances system agility across a broad range of applications. To reduce storage overheads, it offers ILM (Information Lifecycle Management) to intelligently manage the location of all files on the storage system. Depending on pre-sets and parameters, files are moved between fast online storage and slower archive storage to optimize infrastructure utilization automatically. Therefore, expensive online storage isn’t blocked with files which currently don’t require maximum performance.

Single namespace enables users to combine all storage repositories under one URL. This improves usability vastly since files are always at the same location in the same directory no matter on which physical drive and storage unit they actually are stored.

SpycerNode aggregates different types of drives such as spinning and solid state under a single volume. Policies can be created to direct certain file types to the storage pool with the required technical capabilities. DPX files can be written to the fast online pool while other files may be directed to the high capacity pool. To offload data from a more expensive online pool, the project can be moved to the more cost effective nearline pool. This approach allows to use the storage more efficiently, avoids duplicates and simplifies service and maintenance.

SpycerNode provides file level as well as block level storage access. Unlike competitor products, this is also possible in hybrid operation, which provides enormous workflow flexibility. SpycerNode takes advantage of the IBM Spectrum Scale file system and gives you easy access to the drives irrespective of the used access protocol.