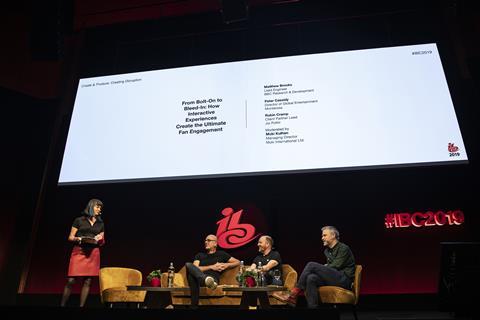 IBC Conference sessions focusing on interactivity have updated delegates on the latest advances in interactive entertainment.

Peter Cassidy, director of global entertainment at Monterosa, was speaking at the session ‘From Bolt On to Bleed In: How Interactive Experiences Create the Ultimate Fan Engagement’, when he revealed that the company is currently in development on the next generation of interactive entertainment.

“We are looking at the next iteration of voting – something where voting is a much more continuous process, which has the ability to constantly shifting the dynamic of the show.”

Cassidy, who has helped develop interactive apps for shows such as Love Island and The X Factor, added: “The big leap forward in interactivity was being able to vote for free in an application. It gave producers the ability to create an interactive universe around a show in the app.”

Brooks said that producers needed to be much better at using interactivity to make content more compelling for younger audiences.

“They need more to bring them in,” he said. “I love a well-crafted drama, so I don’t want to use interactivity to choose what happens to a character. But we can make factual content more engaging by using it to create content with more than a one-size-fits-all solution.”

Brooks added that complexity was the enemy of successful interactive applications. “The secret was keeping interactivity simple, and on one screen,” he said.

Max Métral, senior analytics manager for Formula 1, speaking at a conference session ‘The Sports Data Game’, said that data was becoming an increasingly important tool for F1 in evolving interactive content for fans.

“F1 is very data intensive on screen but we are also now getting data about our viewers and what they are doing,” he said. “Such as measuring people’s level of excitement, using handheld devices to measure sweat levels which tells us how excited viewers are. We use that information to make better decisions about what to put on TV.”