IP-future “not too far away” says BBC

TV will evolve into a more immersive, personalised and interactive medium exclusively delivered over the internet in the not too distant future, predicted Matthew Postgate. 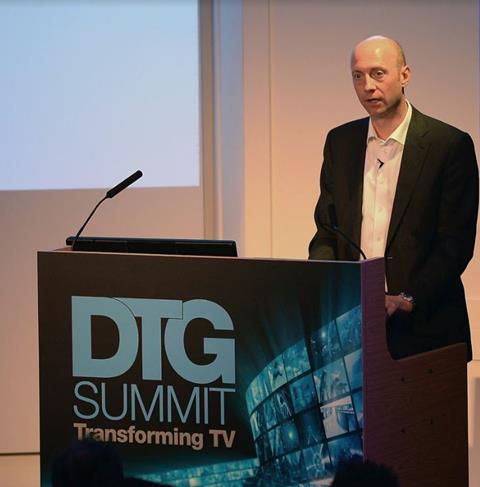 BBC Chief Technology and Product Officer Matthew Postgate highlighted the many reasons for the broadcast industry to be optimistic in embracing its inevitable transition into an IP-lead future.

“We have already seen a huge increase in content investment and the technologies of the internet are going to allow audiences to enjoy greater breadth and greater control over their experience,” he said.

According to Postgate, the past ten years have seen the growth of the internet economy controlled by vertically and horizontally integrated platforms, with a ‘winner-takes-all’ approach.

The global media industry is consolidating, and rather than ushering in a new industrial age, economic growth is concentrated within the major technology giants referred to as FAANG (Facebook, Apple, Amazon, Netflix and Google).

Speaking at the annual DTG Summit in London, Postgate called on the UK media industry to unite together during this time of transition to IP in a move to remain relevant and competitive against new disruptors.

Postgate added that the BBC is well prepared to continue to serve its audiences both traditionally and via the internet, with the shift already beginning.

The promise and potential
“IP networks do a good job of serving the on-demand version of the future,” says Postgate. “It is not [a case] of when but how we will make the transition into being an internet broadcaster.

“The IP future comes with no guarantees, and at this nascent stage the type of future we are heading towards is very much up for grabs,” he added.

“TV is going to evolve into something more immersive, pervasive, more interactive and personalised”

Postgate argued that the UK’s creative industry is one of the most vibrant and successful media sectors in the world, and the key to this success is the sustained investment in British platforms and content.

“The competitive dynamics of the internet won’t sustain the success to uphold that ecology,” he warned.

A successful IP-based future will be an interplay of effective distribution networks; it has to be robust and globally available to all audiences.

“It is crucial we get this right, it is how we will recreate and amplify”

“TV is going to evolve into something more immersive, pervasive, more interactive and personalised,” Postgate said. “We are already seeing the beginning of this shift.”

The promise and incentive of an IP future is in creating and delivering globalised content as well as controlling audience data to achieve the right route to market. The challenge for broadcasters will be in continuing to serve the traditional linear viewers alongside this on-demand version of the future.

According to Postgate, qualities that the BBC is renowned for, including “breadth, universality and intimacy,” have evolved the relationship between the broadcaster and audience, which Postgate described as ‘crucial’ to carry over into the digital age.

He said the particular investment in the range of content, news plurality and positive social outcomes that the BBC drives, can rival that of the tech giants’ attitude of “move fast and break things”.

“It is crucial we get this right,” Postgate said. “It is how we will recreate and amplify the act of the public service broadcasting over the internet.”

Video Transitioning to IP within the studio