Is IP delivery the future for broadcasting esports? 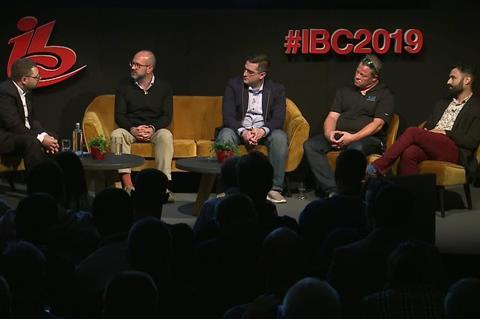 Rethinking the production workflow of esports tournaments, industry leaders explained the benefits of moving towards remote and cloud production and the importance of harnessing data during an IBC2019 panel.

Entering the esports arena is a familiar territory for the likes of dedicated esports platforms Twitch and games publisher Blizzard. However, the increased revenue opportunities and growing audience figures are seeing traditional broadcasters turn to the nascent esports sector for partnerships and growth opportunities.

Blizzard director of live operations broadcast technology group Corey Smith told delegates the company’s 2018 focus was on the originality of the production which enabled its 2019 workflow to take clean feeds from esports tournaments and distribute to local partners as the live gaming plays out.

He said: “We can’t operate in a world where we are earning all that back end budget and so we are looking into the future for IP.”

Smith leads a team that is building the next generation of cloud encoding and distribution systems for Activision Blizzard Esports, which operates big data centres around the world. His primary focus is on the global broadcasting of Overwatch League.

Smith called for collaboration, saying: “Other partners in the ecosystem need to be on the same page.”

This was echoed by panellists agreeing on the esports experiences for audiences that needs to be lean, engaging and capitalise on the best new technology to manage the live feeds and offer cool experiences.

Eicher explained, in order for broadcasters and platform owners to increase the revenue experience they need to harness data management, automate updates and display a list of data points to enrich the experience outside the event.

“Broadcast the esports events live and grow the experience into a festival so that fan can have a great experience outside of the arena,” he said.

Smith pointed to the success of Twitch, he added: “The Twitch broadcast rethought how we brought single path streams from the venue and by splitting the production technology and using IP.

“We are inserting those stories for our casters to tell us onstage and then we can compare in real-time the delivery potential. It’s very similar to traditional sports broadcasting but fans have all the stats at their fingertips.”

“Most of the productions are very complex these days with one on one gaming in the whole production line,” Eichler added: “Technology moves so fast, you must keep up with standards because the viewing experience is super important.”

Riot Games broadcast architect Maxwell Trauss compared traditional sports with esports broadcasting and said the key differentiator is the narrative which increases the storytelling opportunities with the latter coverage.

On the management of the production, he said: “Sending the data, rendering and the observed latency is pretty low if we want it to be, with esports we have the opportunity to play with that a little bit.”

Concluding the session, panellists agreed the esports industry wants to reach more markets and ensure the viewing experience on mobile devices is as good as on a desktop and called for innovation in 4K and 8K to create efficient codecs to manage the data.

Smith added that esports needs to be digital-first and pointed to the opportunities with IP delivery.

He said: “Moving to the cloud is not far away because production in an effective to re-synchronise feed.”

The debate around on-premises versus cloud, is “one of my priorities,” to connect the world with esports quicker, Smith said.