Projections for virtual reality hardware are extraordinarily positive, with findings from UK-based Business Insider Intelligence suggesting in excess of five-fold growth over the the next five years.

A three-year forecast from a highly respected market watcher predicted that worldwide revenues for augmented and virtual reality could reach $162bn by 2020. 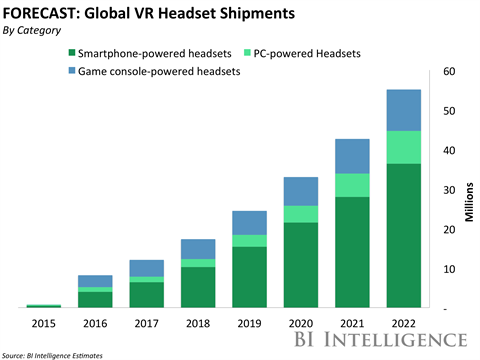 At the same time, though, one-time market leader the Oculus Rift has reportedly been pulled from some US stores because of apparently limited consumer interest.

Facebook, which bought Oculus in 2014 for $2bn, has removed some its pop-up demonstration stations from 200 of the 500 US Best Buy stores.

“We still believe the best way to learn about VR is through a live demo,” said Andrea Shubert of Oculus. “We’re going to find opportunities to do regular events and pop-ups in retail locations and local communities throughout the year.”

Clumsy headsets are an uncomfortable reminder of the recent bump in the entertainment road: 3D television. If VR is to persuade us to don goggles once again, then compelling content is a must.

Gaming is an obvious example of a genre that could benefit from immersion, and new platforms like the Sony Playstation VR are already succeeding.

The essence of VR is that you are in a 360-degree environment, and its attraction is that you can explore it.

Resh Sidhu, Creative Director of Framestore VR, led the design and development of a VR add-on to the film Fantastic Beasts and Where to Find Them.

“Good VR is not cheap and neither is 360-degree video, which can start at $150,000 with some projects even starting at $1 million” - Resh Sidhu, Framestore VR

“We wanted to identify which key narrative moments VR could truly amplify and ways in which we could extend the story,” he said.

The central character’s magical suitcase became a portal – literally – to explore the beasts.

“When we arrived at Newt’s suitcase, we all just looked at each other and said ‘Yes, that’s it. That’s the key’.”

The result is stunning, but it is not suitable to add to every project, not least because of the cost. Sidhu admitted in a recent interview that “good VR is not cheap, and neither is 360 video, which can start at $150,000 with some projects even starting at $1 million.

Another approach is to add an immersive experience to existing events.

BBC Sport provided a hundred hours of 360-degree coverage from the 2016 Olympics, largely by placing a static camera rig at the side of the action, including beach volleyball, boxing, fencing and basketball.

“There’s huge potential for immersive video in sport coverage, and we want to explore that potential directly with audiences,” said Will Saunders, editorial lead for BBC Taster.

“That’s why we experiment out in the open, so people can tell us what works, what doesn’t and whether there’s an appetite for more.”