Journalism under pressure, according to EBU News Xchange panel 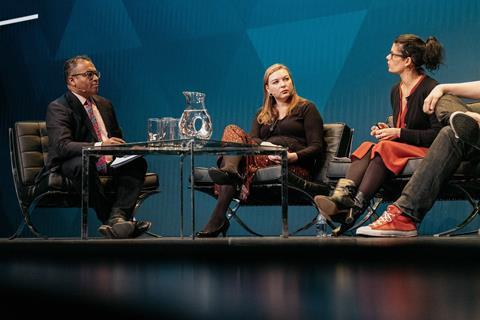 Estelle Cognacq: “Being first is not a priority anymore”

Trust in journalism is facing more pressure than ever, with fake news, disconnection from the public, and the polarisation of politics all creating new challenges for the sector.

During the European Broadcast Union’s News Xchange event in Paris, speakers from broadcasters including the BBC and CNN discussed the challenges facing the sector.

In three panel sessions, Channel 4 news anchor Krishnan Guru-Murthy asked what journalists can do to garner trust from their audiences in the face of fake news.

Facebook’s Sarah Brown came under fire for the decision made by the social media giant to show political advertisements without fact-checking them. Last month, Facebook said it would not reject political ads, nor would it check them for accuracy, as Twitter took the opposite tack, banning all paid for political advertising.

Brown said: “We believe people have the right to see what political parties are saying, and we shouldn’t interfere in that. It is then up to the people to hold politicians to account.”

Brown was taken to account by author and journalist James Ball. Ball, who is global editor at The Bureau of Investigative Journalism, criticised Facebook for using fact-checkers on other content, but picking organisations like The Daily Caller as fact-checkers. The Caller, which is a US-based right-wing publication run by Fox News host Tucker Carlson, has caused controversy since being named part of Facebook’s fact-checking scheme.

Ball said: “Facebook accepted far-right publications like the Daily Caller as a fact-checker, despite the fact that it has disagreed with the other fact-checkers over everything. Yet it hasn’t faced any sanctions.”

On another panel, looking at the divide of the political left and right and how that has impacted trust in journalism, Network 10 journalist Waleed Aly said globalisation was causing an “epistemological crisis” within news organisations.

Discussing splits caused by politics and the entrenchment of political views, he claimed that globalisation, while giving people more access to international news sources, had also caused divisions.

“One of the contradictions of globalisation is that people are splintered by their viewpoint into almost sub-nations, although they aren’t across a whole nation,” he said. “It’s causing an epistemological crisis for the sector,” leaving question marks around truthfulness.

Aly said one cause of this problem is that journalism has moved away from being a trade and into being a profession. “You now have people doing journalism degrees where previously it might be a politics degree. So you lose that diversity of opinion and thought from the newsroom.

“It also means journalists are at a distance from the people they are covering.”

In the same session, a disagreement broke out between speakers from Russia-backed news service RT France and France Televisions over coverage of the Gilet Jaunes protests.

RT’s Xenia Fedorova accused mainstream French networks of failing to tell the story of the protestors, who began campaigning in yellow vests over the rising costs of living and fuel.

“Other newsrooms were late [to cover the protests],” she said, “but maybe that was a concious choice so as not to add oil to the fire. But it is impossible to ignore or downplay such an important movement as the Gilet Jaunes. From the very beginning there was extremem police violence used against the protestors who were absolutely peaceful. So we were there from the beginning and we’ve been doing live transmissions.”

Eric Scherer from France Televisions denied this, saying the network had a greater responsibility to seek the truth and contextualise the news as it was developing.

Host Guru-Murthy questioned Fedorova over RT’s role and its relationship with the Russian state, asking if the organisation, which is “sponsored” by the Russian government according to its website, really has independence or if it is just reflecting the views of Moscow.

Fedorova dismissed this view, saying it was a convenient excuse for Western media to “bash” the channel and that it has full editorial independence.

A heated debate also broke out in a session looking at the disconnection between the media and broadcasters, and the general public. With a UK election underway and one due in the US next year, as well as Brexit still being debated, the public seem to be more disillusioned with journalism than ever before, Guru-Murthy said in his intro.

Ulrik Haagerup of the Constructive Institute challenged fellow panellist Sam Feist, of CNN, over the network’s coverage of President Donald Trump. Haagerup questioned whether CNN’s approach to Trump stories had always been fair and unbiased, saying it was no different to favourable coverage from the likes of Fox News, who have been accused of pro-Trump bias.

Feist hit back, arguing that CNN always offered unbiased coverage. “When the President has a positive story out, we cover it fairly,” he said. “Last week the White House released better-than-expected jobs numbers and we covered them fairly.

“But we also have to cover the negative stories too. What we also do is try to be fair in our reporting.”