The strategic importance of enterprise IT in broadcasting

No longer just a support function, enterprise IT in broadcasting now sits at the strategic centre

When seen as a stack, enterprise IT builds from the data centre facilities to applications. However, it is not simply a case of piling on layers of technology.

For many years, IT rested on three-year refresh cycles and perpetual software licence costs. These were the building blocks of the global IT industry.

Traditionally the Chief Information Officer (CIO) would have a relationship with the Finance Director, but would have very little board level influence and even less interaction with the business owners. The purpose of IT in many organisations was a support function which focused on streamlining processes and driving out costs.

For decades enterprise IT was designed and built on scarcity of elements such as memory and disk space, while networking capacity shortages are still an issue despite progress.

Today, thanks to the cloud, and things being delivered as a service, enterprise IT can be delivered in the context of almost infinite capacity with cloud bursting and full transparency on costs and service levels.

The trend for today’s enterprise IT is platform simplification, business value and transformation. And that does mean moving to the cloud.

But within broadcast organisations enterprise IT must continue to provide and maintain all of this infrastructure (known as ‘keeping the lights on’) while facing a whole set challenges that are even more complicated than those faced by other industries.

Across many sectors enterprise IT wants to make the complex simple and drive more costs from a business.

Now because of mobile, web and social, IT is becoming more important for product and service delivery and customer engagement across all B2C industries and many B2B interactions.

But it often remains the case that the product or service is fundamentally separate from IT. Many businesses are atom bashers with digital front ends.

Getting to utopia requires much pain and will be very complex

The transformation of traditional IT from cost overhead to potential revenue generator has been discussed for many years.

For that to happen it requires an IT-led business transformation.

It begins with IT itself shifting from being a hardware and software buyer to IT being an internal service provider with known costs of goods and internal customers who are charged for the services they use. This outcome would represent utopia for many in enterprise IT.

But getting to utopia requires much pain and will be very complex.

In broadcasting, the production, management, delivery and consumption of the product is now fundamentally entwined with IT.

This makes IT in broadcasting strategically important and not simply a support function for business processes.

This complexity should not be underestimated.

Not least because very few broadcasters can ditch their legacy equipment and transform into born-on-the-internet companies overnight.

The BBC offers a good example of the scope, importance and complexity of IT in broadcasting.

And the numbers associated with BBC IT are huge.

Twelve months ago in April 2016, the BBC issued a tender document for £560m of ICT projects saying it was seeking a single contracting entity for a five year deal with the option to extend to eight years with oversight responsibility for the contracts.

The tender issue was a main plank of its Aurora Programme, a ‘Tower’ based ICT delivery strategy which is seeing the BBC move away from signing monolithic long term contracts with single suppliers.

Instead, contract deliverables will focus on areas such as unified comms, security and identity services while hosting platforms and application services deals will include Cloud management and technical accommodation. The deals will be split among specialist suppliers.

The tender document from April 2016 said the broadcaster wanted  ”a range of Enterprise ICT and Hosting Services.”

”This will consist of three services: End User Compute, Hosting Platforms and Application Services, and a Technology Service Desk which will reside across all of the formed towers established by the Aurora Programme”.

The Aurora programme reportedly attracted interest from all of the big IT suppliers including Ericsson, Fujitsu, BT, HCL, Serco, HPE and IBM. Smaller suppliers are also being invited to tender.

Being publically funded the BBC expenditure and governance of critical projects comes under public scrutiny from the National Audit Office and the Public Accounts Committee. However, the broadcaster received some praise from the BBC Trust that its ”projects have tended to be better scoped and monitored, and the BBC has increased the capability of its central project management office.”

To move to the Aurora programme meant transferring over from a long term deal with Atos. A twelve month transition period is scheduled to end sometime around now.

Enterprise IT within the BBC must ‘keep the lights on’ while separating out contracts with different companies with the objective of saving £180 million while migrating to technology to match rapidly changing current and future viewer demands.

In a blog post from last year, BBC Chief Technology Officer and IBC Council member Matthew Postgate wrote: “Large and long-term technology contracts were commonplace and had their benefits when we signed ours 10 years ago.

”But, again, the pace of change means this is isn’t an appropriate model for the BBC today. We are moving away from one monolithic, long-term contract with a single supplier, to multiple shorter-term contracts with a number of specialist companies.

”We are saving £90m over the next two years and we expect to deliver similar savings once we’ve completed the transition.”

The idea of using the cloud for specific applications is not new.

Back in 2011, the Digital Media Group at the UK’s Channel 5 began using cloud hosting services from Claranet to handle its online activity for the Big Brother franchise.

The objective was to be as cost efficient and responsive to unpredictable demands and surges in activity expected at unknown times from the mostly young and digitally aware Big Brother audience demographic. 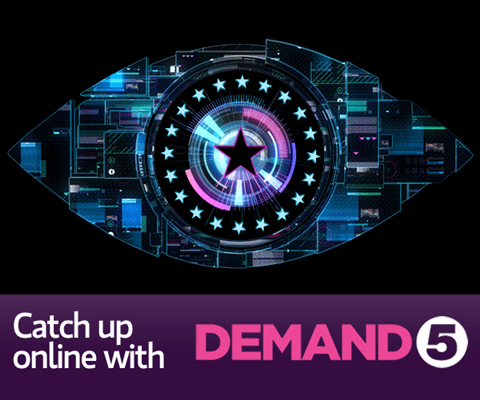 In a case study issued at the time, Channel 5 said its Digital Media Group had outsourced to the supplier hosting and first-line application management for a number of its sites.

However proving that nothing is without risk and that outages can always happen, last year Channel 5 suffered three separate outages of its online services.

The first was in June and there were two in September when the company issued the following notices saying:

“Due to an incident at one of our hosting provider’s data centres, we are currently experiencing an outage across many of our live services…”

There was no indication that Claranet was involved.

“Due to an outage at one of our content delivery network providers, we are currently experiencing an outage across many of our live services.

“We are working with their engineering team to resolve the issue as quickly as possible.”

The use of cloud hosted solutions for specific workloads is not unusual and is becoming increasingly popular.

But it is owner managed IT infrastructure in owned and operated ’on premise’ data centres that remains the basis for the vast majority of IT provision.

The split between on-prem, off prem and cloud

While the migration of IT infrastructure to the cloud and to third party data centres is expected to continue to grow, the vast majority of enterprise IT remains inside the end user organisation. 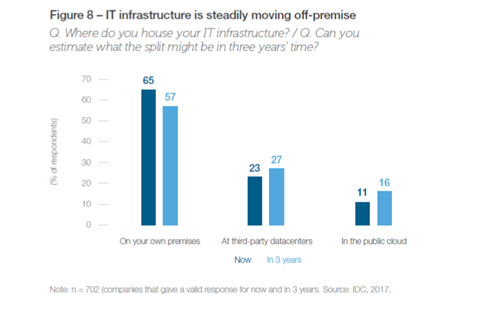 A 2017 research study by IDC, conducted for data centre provider Interxion, revealed where infrastructure is currently located and the three year plans for any shift to third party data centres or to the hybrid cloud solutions.

It found most IT is still housed in companies’ own, on-premise data centres.

It said: ”This is despite a long history of IT outsourcing and managed services spanning several technology cycles, and two decades since the emergence of Internet data centres and Web hosting services.”

In its survey, 722 companies provided a breakdown of their IT housing into their own on-premise data centre, third-party data centres (for example colocation), and public cloud providers.

Companies are steadily moving their IT off-premise, into both third-party data centres and the cloud, it reported.

The reasons vary but one unnamed Danish media company was cited in the research report saying it was migrating 20% of IT from its own data centre into third-party facilities.

“Maintenance of large amounts of data is really difficult, so that is the reason we are moving to the third-party datacentres,” it said.

Different broadcasting, media and entertainment companies will have different motivations for pursuing particular enterpise IT strategies but the decisions being made today inside broadcasters will have long term effects.

What is clear is that the whatever the workload, whether it is online, production, management or delivery, the IT mix will become increasingly complex.

For those will responsibility for enterprise IT in broadcasting the meaning of the phrase ‘keeping the lights on’ expands daily and IT’s strategic importance to the business continues to grow.