The show must go on for live sport which is lockdown entertainment for many at this time. Getting major events to air adhering to Covid restrictions has placed huge demands on the broadcast and production teams charged with maintaining high standards for client and viewer without risking the health of crew. 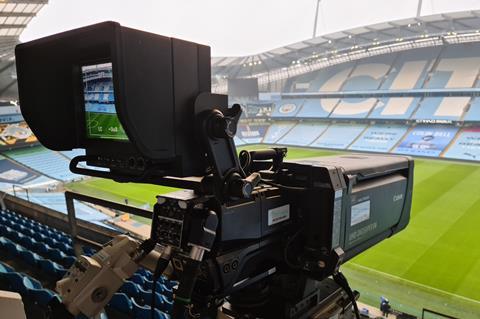 FA Cup: Changing from the tier system to national lockdown has meant even stricter restrictions

Remote production technology goes some way to helping sports resume but the nature of some events means that traditional outside broadcast methods are the best means of coverage provided the set-ups are adapted.

That’s certainly the case with two recent examples, both primetime in the sporting calendar but with no easy means to switch to an entirely remote operation.

Here’s how the production teams behind the PDC World Darts Championships and the third round of The FA Cup meticulously planned for one eventually, only to have to change at the last minute as Covid threw another spanner in the works.

PDC World Darts Championship
Since its inception in 1994, the PDC World Championship has been broadcast live and in its entirety by Sky Sports in the UK, reaching over a million viewers in peak periods over the Christmas period.

From the first throw on December 15 to Gerwyn Price’s final winning arrow on January 4, Sky Sports’ covered all 28 sessions in a marathon OB that would normally be planned as far back as August. 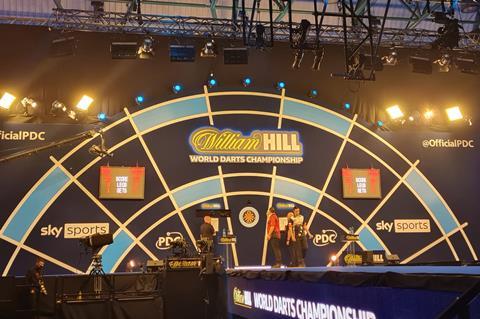 World Darts Championship: The 24 cameras and 16 operators usually used was reduced to 18 and 6

The uncertainty of whether live sport would even be able to resume at that time put planning on hold. When the tier system was introduced in October, Sky Sports worked on the assumption that no spectators would be allowed into the Alexandra Palace. Then, at the end of November, the government relaxed rules to allow limited numbers of fans back into stadia. For the Worlds that meant a thousand fans were to be allowed, down from the usual 3,000.

“We met with the PDC and revised our plans accordingly,” explains Andy Holmes, Senior Production Manager, Sky Sports. “The main impact was on our presentation studio. To comply with Covid protocols we couldn’t have it anywhere where players, on-air talent or crew would interact with the public. We had to relocate it with a very acute angle looking down to the stage. It was the only position which would be closed off to public access and yet enable safe access for our staff.”

The set itself was redesigned as a larger space built with social distancing in mind. Event contractor Trans-Sport had this built rigged for the tournament start when, with little warning, London went into Tier 4 restrictions.

“Suddenly no fans were allowed,” says Holmes. “It meant that our presentation position wouldn’t work. There was this huge gap where the audience should be.”

There were concerns about whether the absence of fans at Alexandra Palace would diminish the prestige of the tournament, but Sky Sports and the PDC came up with a new plan.

“We gave Trans-Sport another huge task. Within 24-hours they had loaded up their trucks, driven down from Nottingham and installed a newly designed walkway centre stage and open plan presentation area.”

With fans in the arena that wasn’t possible but with the oche at one end and an LED screen as backdrop to studio presentation at the other linked by a walkway, Sky added an element of stagecraft to each match. This last-minute switch required all the studio cameras and lighting to be moved and re-rigged.

In previous years, the Worlds would have been covered with 24 cameras and 16 camera operators. The 2020-21 event was reduced to 18 cameras and the number of operators to seven.

To do this, Aerial Camera Systems adapted several Sony cameras with SMARThead hotheads to enable them to be remotely operated from the OB compound in the Great Hall of the Ally Pally complex. Having the OB compound under cover was a bonus and allowed desks for technical operation to be arrayed outside the trucks, further enabling social distance.

Trans-Sport: Constructed booths separated by perspex so commentators could interacts

Without spectators to film, an overhead Batcam was easily discarded. Nor was there need for radio cams to roam the audience.

The camera tally, remotely operated in either TV compound or backstage included: 3 x remote Studio cameras; 4 x remote/locked off cameras on truss; 4 x remote cameras on Stage; a rail cam; 2 x remote/locked off cameras behind stage looking through set; and one manned camera backstage looking through set. The only manually operated camera in the venue was a Jimmy Jib.

The commentary booth which would normally house two commentators was doubled up so that Trans-Sport constructed two 8ft booths separated by Perspex window so commentators could visually interact. Each individual commentator has their own allocated lip mics and headsets and the whole booth was moved into the TV compound to avoid any cross over with the general public.

While the director vision mixed within CTV’s main OB4 UHD scanner, edit support was provided by CollecTV with one editor on-site and two more in suites back at Sky.

“If there’s one bonus about this year it is how crisis has thrown people together,” Holmes says. “There have been no prima donnas. Everybody has worked together so well.”

The FA Cup Third Round
National lockdown didn’t knock out the FA Cup nor Gravity Media’s production of third round live coverage.

Nonetheless when planning began in November most of the country was in tiers where limited crowd attendance was possible and restrictions on movement were less severe.

Eight matches were broadcast live on either BBC or BT Sport with a further 24 streamed live on the broadcaster’s digital platforms and on the FA Player app across 9-11 January. All 32 matches had a live World Feed produced for international distribution by Gravity which also match directed 21 of those in tandem with OB contractor CTV. 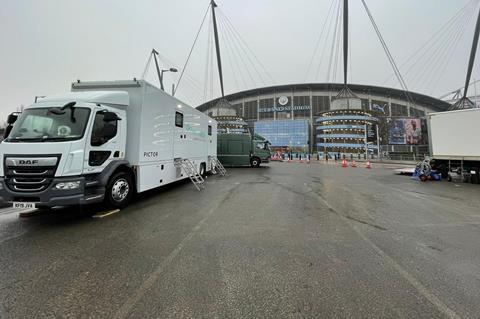 Gravity media: Have to adapt to changing plans quickly

These matches varied from EPL stadia at Southampton to Championship venues like Nottingham Forest to grounds that rarely host TV of any scale including Boreham Wood, Wycombe Wanderers and Cheltenham.

“This is always one of our busiest weekends of the year and the devil is in the logistical detail,” says Angela Gibbons, Commercial Manager, CTV.  “That goes triple for 2021 where there so many variables that could all be changed at short notice.”

Gravity Media dictate the editorial and therefore the kit required on-site. For example, it will produce a World Feed and BBC commentary for some matches while others might have either of those or neither. The majority of matches had feeds contributed to Gravity’s London MCR for programme packaging and onward distribution via BT Tower or satellite.

It is able to contribute feeds from all 72 English Football League grounds via NEP Connect but non-league venues necessitate an SNG truck. That’s problematic when these grounds might not even have parking space for an OB truck.

In addition to which, most of the matches kicked off on Saturday 9 January meaning that each match needed separate OB trucks, cameras and crew on-site.

“We tried to have a paint by numbers system to cut down the variables when it came to kit,” says Gibbons. “We also tried to do as much regional crewing as possible.”

The camera plans ranged from 4 to 7 Sony HDC 4300s but CTV couldn’t just allocate its smallest trucks to the smallest grounds. Even with a reduced crew, each vehicle needed to be large enough to accommodate social distancing.  The director of each game also vision mixed.

CTV were also tasked with managing Covid risk assessment and paperwork per match. While Premier League clubs are well drilled in the protocols lower league grounds are understandably less well funded or prepared.

“It’s our responsibility to come up with solutions,” says Gibbons. “We ran our own health declarations which included things like temperature testing on site.”

While preparations began in November, any detailed work including venue surveys, kit and crew allocation could only begin after BT Sport and the BBC had made their selection of live matches two weeks after the Third Round draw was made on 30 November. That condensed an already hectic schedule.

Even then an outbreak in the Shrewsbury squad meant that its tie with Southampton at St Mary’s had to be postponed (until January 19) and a frozen pitch at Boundary Park forced the match between Oldham and Bournemouth to be switched to Bournemouth’s Vitality Stadium. CTV de-rigged the OB at Southampton and moved it to Bournemouth with a day’s notice.

“All of this means that you can no longer plan without having a back-up plan,” says Gibbons.