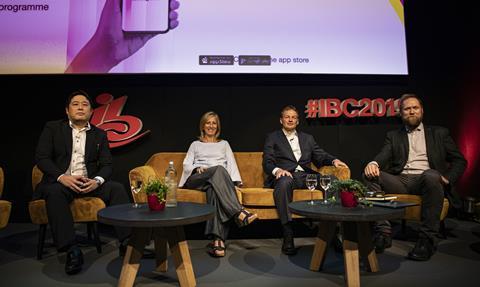 Paper authors at an IBC Tech Talk presented research on why 3GPP has created a new media streaming architecture for 5G, new innovation in 4K and UHDTV delivery and regional programme variations in a Single Frequency Network (SFN).

“The seemingly exponential growth in video consumption is a challenge as consumer demands and expectations increase,” said ARRIS vice president of technology solutions Darren Fawcett, moderating the session entitled ‘Good film choice – should be with you next Wednesday.’

Today there are more smartphones in the world than toothbrushes and 75% of the UK population accesses the internet daily, the panel revealed.

Fawcett explained: “Innovation is far from over; we have only just begun in terms of where me move from legacy broadcast to a far richer media world with content on the go and seamless interoperability.”

UHD video is driving increased bandwidth, 8K and HDR are increasing bandwidth demand and broadcasters are left to answer the question: How do we deliver on legacy broadcast and IP systems?

Addressing one of the industry challenges is RAI, the Italian public broadcaster which has effectively created a solution to deliver regional content in content in national DVB T2 SFN standard, the approach based digital multi PLP and transport single illumination standard.

RAI senior researcher Vittoria Mignone presented the paper Regional contents in a national DVB-T2 SFN: a novel approach based on DVB-SIS which approached the challenge to delivering regional customised content in a national SFN in DVB-T2.

Pointing to a “basic scenario” of delivery, ordinarily the national SFN would not allow the inclusion of regional content, because signals from adjacent transmitters would interfere.

The case study focussed on the Lombardia region where Mignone explained separating regional content meant that previously the signal would not arrive.

However, the paper revealed that a single frequency is an expensive resource and had previously restricted to five PLPs frequencies.

“The possibilities to increase the number of PLPs had potential but that would have reduced the bitrate and quality of each signal. Frequency is an expensive resource and have restricted to five outputs,” Mignone said.

“We had two possibilities to increase the number of PLPs but that would have reduced the bitrate and quality of each signal or reduce the channels required.

“This solution with a single UHF transmitter channel, meant we gained a spectrum efficiency of 70%, which is a good result.”

Mignone said the trial had been a success for RAI, and claimed there are potential opportunities for global adoption.

She added: “The advantage maximally exploiting the frequency spectrum. No need to implement a regional SFN and no adoption of multiple frequency channels. Thanks to the single illumination system enables DTH DVB-S S2 and S2X a primary distribution DVB-T/T2 terrestrial transmitters using a single satellite signal.