Camera moves used to mean meaty men pushing dollies or swinging cranes. Then Garrett Brown invented the Steadicam, ran up steps with Rocky and down long corridors in The Shining, and the idea of camera movement became a lot more fluid. 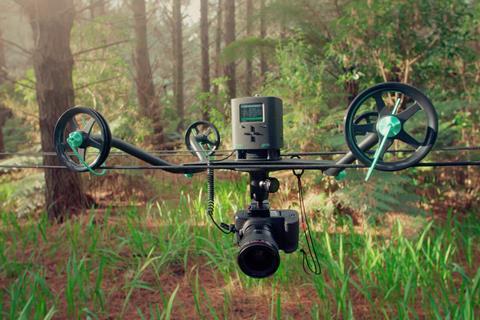 A Syrp Slingshot cablecam system controlled by its Genie module

Now such flowing movement is possible using small, gyroscope-driven gimbals that can be held in one hand – although it is still a good idea to be fairly fit – with buttons, dials and mobile phone apps for camera control.

The lightest versions use mobile phones as the cameras too, although DSLRs and mirrorless cameras like Pansonic’s GH5 are more usual. Some handheld gimbals can even be used with heavier cameras, like a Red, although two-handed rigs are less tiring to hold once the weight goes above a few kilos.

Creating a beautiful shot, however, is about more than just swinging a gimbal in the general direction of the subject and hoping everything looks OK. Being able to take control, when you need to, over everything the camera does require more than just a stable platform.

So, when you look at what one of the latest gimbals, such as DJI’s Ronin-S, can do, the accessories are just as important as the camera support itself. While most of the features can be accessed via the phone app, DJI’s Force Pro controller and more traditional Master Wheels cinematic controller turn it into a professional tool.

The wireless Master Wheels, in particular, give movie crews an interface they’ll be well used to, for controlling pan, tilt and roll using stainless steel wheels. Meanwhile, the Force Pro is an upgrade on a phone app, with its built-in inertial measurement sensor and compass working together to prevent the gimbal drifting to maintain a consistent frame and to improve the precision of its movements. It can be fitted to a lightweight handlebar alongside monitors, video transmission systems and thumb controllers, as a complete control interface. They will also both work with DJI’s larger (two-handed) Ronin 2 gimbal, and with third-party systems.

The new Ronin-S is DJI’s first single-handed stabiliser. Designed principally for compact cameras, it can support a payload of up to about 3.6kg. However, users have successfully fitted heavier cameras, such as Sony’s FS5, but these need to be stripped down to fit.

The $699 stabilisation system can compensate for zoom lenses with external zooming barrels and higher magnification ratios, and it will work with both lens and sensor stabilisation systems (rather than working against them, as some stabilisation systems do). It has a joystick to help frame the shot and a focus wheel that can be mounted either side of the handle, while the mobile app allows users to create complex camera moves, including timelapses and timed rotations. It can even pull focus on some cameras, such as the GH5.

There are a host of similar gimbals from the likes of Freefly, Tilta and Zhiyun Tech – all of whom offer larger two-handed versions and smaller gimbals for mobile phones (as does DJI). 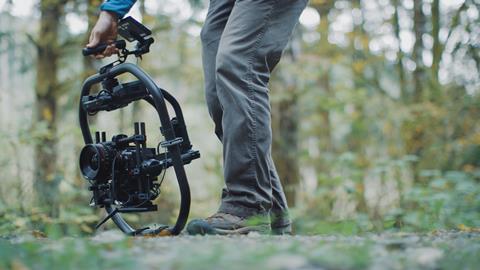 Ensuring the gimbal will work with the weight and size of camera you have (and any payload – lenses, microphone, light) is essential. Some gimbals are not happy going any way above (or even below) their posted payloads. One size does not fit all.

A further problem, mainly affecting users of larger cameras fitted with longer lenses and lens accessories (such as focus and iris motors), is balance. If the rig is front heavy, it needs counterweights, which means even more weight to carry. One option is to add offset brackets, such as the Ignite Digi Tilt Offset Brackets for Freefly’s Movi Pro, which allow users to fit larger lenses while keeping the overall weight down.

Although Steadicam has continued to develop its body-worn vest and arm systems, which are a necessity for heavier cameras, it has also brought out tiny handheld gimbals for smaller cameras, such as the Curve (for GoPros) and the 3-axis gyroscopic Volt for phones. Users of other gimbals, such as the Ronin 2 or Movi Pro can also now attach them to a Steadicam arm using the Steadimate adapter, which takes the weight off of your arms and further improves stability.

“Creating a beautiful shot is about more than just swinging a gimbal in the general direction of the subject and hoping everything looks OK.”

Beyond the gyroscope
Not everything revolves around gyroscopes - there are other ways to make your camera moves flow.

The Easyrig backpack, for example, with its overhead arm and suspension line, takes the weight of an ENG camera off your shoulders and transfers it to your hips – there are versions for payloads from 2kg to 32kg. It allows you move much more easily, and gives a certain amount of stabilisation. It can also be fitted with a Flowcine Serene two-axis spring arm for added stabilisation. It handles any vibrations or motion errors on the vertical axis that comes from walking or running with the rig. It also stabilises side to side errors by counter pivoting around its centre axis. It can also support gimbal rigs, like Flowcine’s own Gravity One, or others, for when you don’t want tired arms.

Easyrig has several new accessories, including a Quick Release hook that replaces its previous somewhat fiddly attachment. It securely holds the camera with little to no setup time, is simple use (just snap it on to the ball joint), and has been tested up to 115kg.

Another neat addition is the new Easyrig umbrella, so you can cover both you and your camera. It fits in a holder mounted to the upper arm on the Easyrig and also has thread holes to mount a battery or other accessories, and to position a lighting stud. It can also be useful if it is very sunny and hard to view a screen. 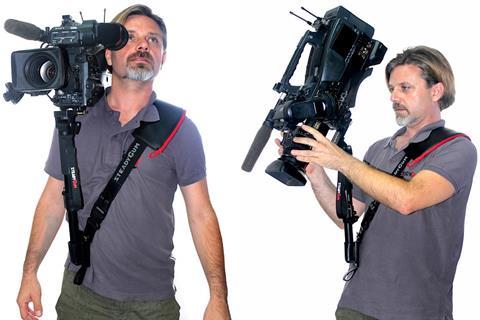 Camera rest: The SteadyGum offers ease of movement and distributes the weight

An even simpler idea is the SteadyGum, which takes the weight of a camera from the arm or shoulder, and distributes it more evenly on the body. It also provides some extra stability when shooting handheld, and makes it easier to adjust between shoulder-mount use and waist level shooting.

It is based on an old idea where a monopod was inserted in a flag holder attached to a belt to take the weight off the shoulders, but improves it with a tilt bracket that aids freedom of movement while retaining support. It adds elasticised fabric in its support belt for extra stability while permitting the camera to be moved into a new position quickly. SteadyGum’s developers claim that it can reduce the effort needed in using a large ENG-style camera by almost 80%

Steadicam has also updated the monopod, with the new Air, a three-section carbon fibre model that uses a gas lift activated by a foot pedal for adjustable height without having to move your hands from your camera. It means the monopod can move with you more easily (it can also swivel about its foot). It is available in a 11kg and 6.8kg configurations.

Simpler again is Wolf & Belt’s rugged Camera Studio Belt: a belt made of particularly strong, thick leather, which includes a neatly-shaped wooden block that offers somewhere to rest a camera on for steadier hand-held shots. It also has two hurricane-proof hooks for the cable and cobra buckles so that you can take it off with one hand.

One of the most interesting systems for adding controlled moves to your camerawork is the Syrp Genie II – a motion control device that can be operated via a mobile app, and comes in two flavours: A linear version that uses a rope-drive system to move the camera along a slider (or to move a dolly or cable cam); and a Pan/Tilt unit that adds another axis of controlled movement – the two units can be used together or separately. There is also a lower-cost Genie Mini for smooth panning motion time-lapse or real-time video, and Slingshot, a cablecam system that works with Genie and can carry a camera up to 100m for motion controlled moves.