NASA and AWS carried out a live video call from the International Space Station to the SMPTE 2019 conference using cloud data storage and video origination from space. 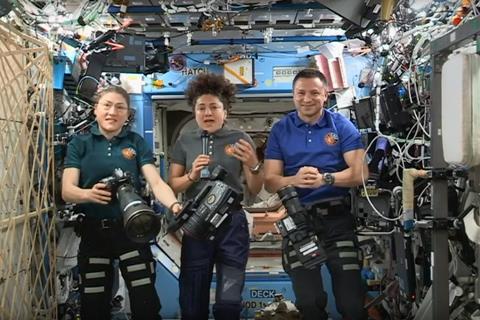 The proof of concept, which was demonstrated during SMPTE’s annual conference in LA, expands on the workflow NASA and AWS co-produced in 2017 to enable the first-ever live 4K UHD stream from space.

In this trial, which resulted in a live video discussion with astronauts aboard the International Space Station, NASA and AWS tested cloud-based media services for high-quality and secure live video transport, video origination and packaging, broadcast-grade live video processing and content delivery networks.

The test took place during a special SMPTE programme honouring the 50th anniversary of the Apollo 11 moon landing with the technology enabling a live interview with NASA astronauts Christina Koch, Jessica Meir, and Andrew Morgan located 250 miles above Earth aboard the ISS by two NASA colleagues presenting at the LA event.

It built on a 2017 broadcast made by AWS and NASA – the first live 4K broadcast from space. For the event, AWS used its MediaConnect transport platform, which transferred the transmission from the Johnson Space Center to the Westin hotel in LA, where SMPTE 2019 took place.

“The first 4K broadcast was a game changer from numerous angles,” said AWS technical marketing engineer Josh Winstead during a presentation of the technology which took place after the talk with NASA.

“Based on that exciting event, we have continued to work with our great partners at NASA to bring other events to life. The event today, at the SMPTE 2019 conference, is another example of iterations in this workflow and how we are continuing to improve the process of content delivery.”

During their presentation, Grubbs and Mathis had discussed the challenges of broadcasting from space, as well as work on NASA’s Artemis Program, which aims to put another man or woman on the moon by 2024.

On 26 March 2019, US Vice President Mike Pence announced that NASA’s Moon landing goal would be accelerated by four years with a planned landing in 2024, with the Artemis Program announced a few weeks later.

During their talk, Grubbs and Mathis said that NASA is looking to the media and entertainment industry’s expertise to help overcome some of the challenges of shooting and broadcasting from space.

“Every time I come up with a solution an engineer kills it with reality,” joked Mathis. “We need support from the experts – from you guys – to make this work best.”