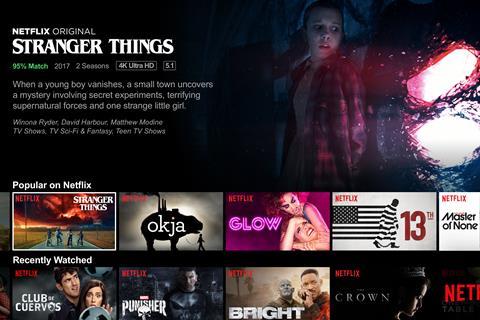 Netflix and Youtube: Switch to SD in Europe to ease network traffic

Netflix and YouTube have agreed to switch streaming quality in Europe down from high definition to standard definition ahead of an expected streaming boom as many countries go into coronavirus lockdown.

As more countries across Europe order people to isolate themselves in an attempt to stem the spread of Covid-19, figures from Nielsen suggest streaming traffic could spike by up to 60%.

European officials appealed to Netflix and YouTube, two of the world’s biggest streaming platforms, to ditch HD video to prevent an overload on telecoms networks carrying the traffic.

European Commissioner Thierry Breton spoke to Netflix CEO Reed Hastings on Wednesday and again on Thursday about the strain video streaming was placing on networks. Breton challenged the streamers and telcos to “take steps to ensure the smooth functioning of the internet during the battle against the virus propagation.”

Netflix has responded by saying it will reduce bit rates across Europe and the UK for 30 days following the discussions with the EC.

In a statement, Netflix explained: “Following the discussions between commissioner Breton and Reed Hastings – and given the extraordinary challenges raised by the coronavirus – Netflix has decided to begin reducing bit rates across all our streams in Europe for 30 days.

“We estimate this will reduce Netflix traffic on European networks by around 25 per cent while also ensuring a good quality service for our members.”

Google-owned YouTube has also agreed to follow suit by lowering the default quality of its streams to SD. The AVOD platform said it had so far only seen a small number of peaks, but wanted to minimise pressure on networks as more people log on to work remotely.

“We are making a commitment to temporarily switch all traffic in the EU to standard definition by default,” YouTube said in a statement.

The internet is already feeling the strain of increased traffic as much of Europe is tasked with remaining at home. German internet exchange DE-CIX – one of the world’s largest internet exchanges by traffic volume – last week broke its own record for throughput.

DE-CIX successfully delivered more than 9 terabits per second (TB/s) through a Frankfurt internet exchange. According to the company, it has now broken a new ‘sound barrier’.

Nine Terabits per second is akin to the simultaneous transmission of up to 2 million videos in HD quality or a data volume of more than 2 billion A4 pages of text (a stack of paper close to 200 kilometres high).

Varnish Software, which works with a number of broadcasters and streaming platforms including games service Twitch, warned that the entire internet is now experiencing an “unprecedented surge in activity”.

Varnish CEO Lars Larsson said: “Streaming services can alleviate some of the pressure on networks by switching to SD streaming. This will mean there is less traffic going across networks, and also means each streaming server has to handle less data and can, therefore, serve even more users at once.”