Netflix to reach 128 million subscribers by 2022

The total number of Netflix subscribers will increase from 89 million in 2016 to 128 million by 2022, according to a report by Digital TV Research.

The report also estimated Netflix subscribers internationally will exceed the number of US subscribers by early next year.

”Furthermore, Digital TV Research believes that Netflix will fall foul of Russian legislation. Due to be introduced in July 2017 this restricts foreign companies to only 20% of digital platforms’ equity.” 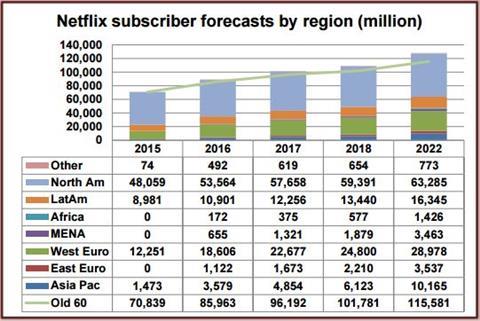 Source: Digital TV Research. Note: Old 60 refers to the 60 countries where Netflix was operational before January 2016.

The research group forecast that by 2022 viewers based in North America and Western Europe will comprise 72% of Netflix’s total subscribers. This is down from 81% in 2016, whilst the Asia Pacific region will grow to nearly triple their subscriber rate in 2016, to over 10 million subscribers by 2022.

Netflix continues to expand its content strategy into more original content after the success of Stranger Things, The Crown and the release of season five of House of Cards. 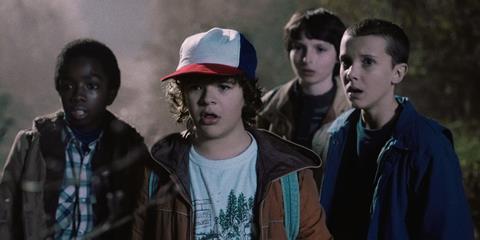 Today, Netflix’s total subscriber list sits at 190 countries, having expanded to 130 additional countries since January 2016. Those 130 countries subscribers will account for 14 million of the total Netflix subscribers combined by 2022, which is an increase of 3 million from the end of 2016.

The top five countries in the report, are forecasted to supply two-third of Netflix’s sucscribers by 2022 with the US contributing 44% of the total subscribers.

The 60 countries that started subscribing to Netflix before January 2016 will provide 90% of revenues in 2022. However, Asia Pacific will quadruple its revenues to more than $1 billion by 2022.

Digital TV Research also forecasts that Netflix’s original content spend will climb to $8.5 billion by 2022, working out to be 57% of subscription revenues.