The majority of content production is still HD and the industry is several years from delivering 4K to the home as standard, but NAB has proved there’s an unrelenting march toward Ultra High Definition - and 8K UHD at that. 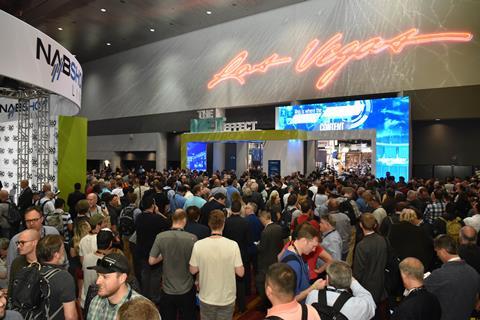 UHD display sales have now passed that of HD for the first time, according to research firm IHS Markit, selling at a similar rate as the uplift from standard definition to HD resolutions.

Globally, there are now 142 4K channels on air with IHS forecasting that by 2022 40% of Western European homes will own at least one UHD display. A bump in sales is predicted around next year’s Tokyo Olympics.

In a move that it said demonstrates the industry’s 4K UHD maturity, the Ultra HD Forum (UHDF) - a coalition which includes Dolby, Fox, Huawei and Technicolor – updated its official guidelines to encompass high dynamic range, high frame rate delivery, and next generation audio.

The forum noted the development of 8K as “a promising technology” and plans to include it in future guidelines. “Our immediate interest is in 4K and HD resolution-based services and technologies,” said UHDF president Thierry Fautier. “But the Forum continues to monitor the development of 8K video as it may relate to television production and distribution, including leveraging 8K production and display technologies within a 4K distribution system.”

“The big focus is on low noise levels which for those involved in HDR is really critical.” Mike DesRoches, Sony

Live production
In terms of fresh 4K compatible product, Sony’s release of a new camera system stood out. The HDC-5500 carries a 2/3-inch global shutter and is capable of shooting 4K output over IP via SMPTE ST2110 and NMOS IS-04/05 as well as over 12G-SDI baseband. Direct 4K output is available from the camera head, and it can operate 4K wirelessly if required. A high frame rate option can be licensed later this year. NEP Australia and US OB company Game Creek Video have placed the first orders. 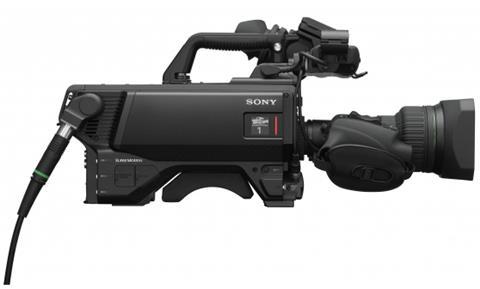 “The big focus is on low noise levels which for those involved in HDR is really critical,” explained Mike DesRoches for Sony Electronics. “The camera is wildly flexible [in terms of accommodating high frame rates, HDR, IP and HD and 4K] and comes with a global shutter to eliminate strobing. We’re getting rid of some real estate in terms of costly BPUs so we’ve really squished down the requirement of metal.”

Grass Valley has given its LiveTouch slow-motion replay unit support for 4K UHD as well as support for HDR. The new HDR capability handles colour mapping internally so there’s no need for additional processing. The LiveTouch panels can be used either at the event site while the LiveTouch server remains at home, or in a production facility with the server in an engine room miles away. 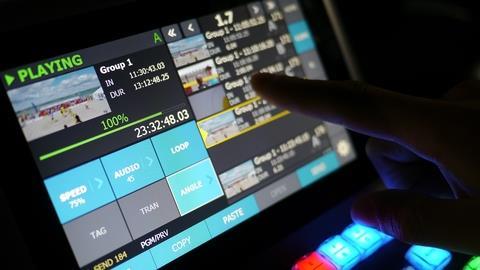 Grass Valley also has a new Creative Grading solution intended to make it easier to control the complexities of HDR, colour, and 4K in real-time. Camera shaders can also use a WiFi-enabled tablet to establish visual matching between physical and digital elements and adjust for transitions from indoor to outdoor lighting.

With its new Live Production Suite (LPS), Panasonic thinks it can boost its presence in sports and studio broadcasting. The LPS is operable in both SDI and IP (SMPTE2110) in 4K and routes video over IP from its AK-UC4000 4K live camera system. The LPS will also take inputs from Panasonic’s robotic PTZ cameras. 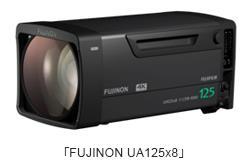 Fujinon UA125×8: Claimed to be the world’s highest zoom ratio

Fujifim debuted a lens with what is claimed to be the world’s highest zoom ratio of 125x. The Fujinon UA125×8 covers focal lengths from 8mm at wide angle to 1000mm at telephoto (or 2,000mm with the built-in Extender). It is still in development.

Until then Canon’s flagship 4K sports zoom UHD DIGISUPER 122 boasts the highest zoom ratio as well as longest focal length, and the widest angle on the market enabling broadcasters to save money by having fewer lenses in the field.

Released last year, the lens has a proprietary Air Sphere Coating (ASC) that reduces flaring and ghosting for shooting in HDR and Wide Color Gamut and is freshly outfitted with a function that enables operators to create bokeh, the effect which delivers an aesthetically pleasing blur in the out-of-focus parts of an image.

Canon has been testing an 8K camera, along with a workflow that includes an 8K HDR display and signal over optical fibre network.

“It’s a working proof of concept to show that we can do 8K and when the market is ready we’ll have an end to end chain we can bring to market,” said Stephen Hart Dyke, product marketing manager, Canon Europe.

Panasonic’s previously announced 8K ROI (Region of Interest) multi-camera system is scheduled for market release in July. The AK-SHB800GJ is a box-type camera and features an 8K full-size CMOS image sensor and EF lens mount. It’s not intended for 8K capture, but to make live multi-cam 4K capture more cost efficient. Up to four different HD videos can be cropped from the single wide-angle 8K image, and each cropped image can be panned, tilted and zoomed individually. Up to eight of these units can be connected and operated, in theory making a 32 cam HD camera set-up operable as one integrated system. Feeds from the 8K ROI system can be driven by BlackTrax for automatic tracking and fed into the Live Production switching system.

For monitoring 8K you might need Leader’s LV5900 8K waveform monitor. The instrument’s feature set includes an 8K colour bar and test pattern generation as well as four-input simultaneous display of HD video from HD to 3G-SDI and 4K video.

It’s worth noting 8K TV sets are predicted (by Strategy Analytics) to be in over 50 million homes worldwide by 2025, by which time sales will pass 30 million a year. That’s nowhere near enough to warrant an 8K broadcast service but watch this space around, say, 2030.

“What we are keen to do now is throw this breakthrough over to the market to tell us what it wants to do with it.” Scott Walker, Boxx TV

Recorded production
A couple of companies claimed to have cracked the ability to transmit 4K wirelessly over licence free frequencies. UK manufacturer Boxx TV, which makes wireless links for use as a video assist in feature film and live reality TV, arrived in Vegas with a prototype “that shows sub-frame 4K wireless is not only conceptually possible, but very much a reality,” explained Scott Walker, CTO. “What we are keen to do now is throw this breakthrough over to the market to tell us what it wants to do with it.” 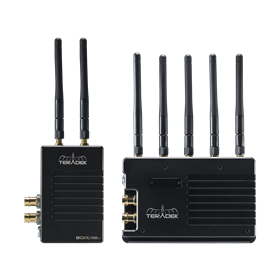 Vitec Group brand Teradek landed with a working model of Bolt which it said was the first 4K HDR wireless video system to provide uncompressed, zero-latency (<1 ms) transmission. The Bolt 4K (costing $7,990 from June) transmits 10-bit, 4:2:2 HDR video up to 1500 ft. line-of-sight over the unlicensed 5 GHz band and can multicast to six receivers simultaneously. For HDR workflows, the unit supports the HDR-10, PQ, and HLG standards and can transport extended camera metadata, timecode, and record triggers over the wireless link.

JVC has brought out a 4K version of its Connected Cam line of camcorders. The 500 Series cameras feature a 4K CMOS imager and integrated 20X zoom lens. Recording options include to SDHC/SXHC cards or solid state media in 10-bit ProRes 422 at 4K and 50/60p frame rates. There’s HDR and slow-motion HD recording, too. 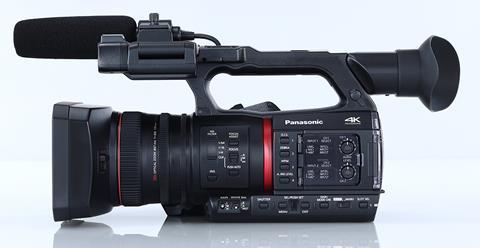 Panasonic was showing its new 4K camcorder AG-CX350 which records 4K to SD cards and is priced under $4000 to target Vloggers, run and gun shooters and documentary makers. The firm also announced development of a new P2 4K camera recorder.

Blackmagic Design announced in February that it would unleash an upgraded URSA Mini Pro camera. The specs for the $6000 G2 include recording of 120fps at 4.6K compressed using the firm’s own RAW codec.

Arri’s new Alexa Mini LF is a compact version of the firm’s large format cameras for handheld, gimbal, or drone shots. Already the mainstay of Netflix and Amazon original drama, the combination of full frame Super 35 sensor, 4.5K resolution and lightweight body should cement this camera as a favourite among cinematographers. 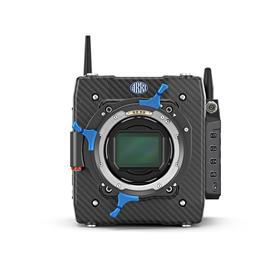 If it’s 8K you need then cameras on show in Vegas include the DSMC2, Red Digital Cinema’s latest modular system, which comes with a DP’s choice of four sensors including the Monstro 8K VV and Helium 8K S35. 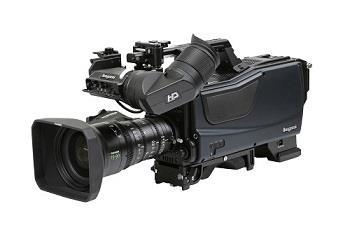 Sharp teased a prosumer camera with micro four thirds sensor capable of 8K video recording at CES in January and made the official announcement at NAB. The pocket device can record 8K (7680×4320) at up to 30fps using H.265 compression. The bitrate for 30p 8K recording is 200Mbps and the price is believed to be around $4000.

12G-SDI for UHD production
The introduction of IP was meant to consign coaxial cables to the dustbin but old school networks are alive and kicking. With 4K UHD increasingly common for production, SDI remains the familiar, trusted means of handling it uncompressed. What’s more, engineers have managed to design 12G single cables making UHD transport possible without the complexity of a Quad-link, and importantly at over distances of more than a few feet.

Even more significantly, if you’re on the mad rush to 8K then 12G-SDI (or multiple 6G SDI) is about the only way to spit it out. 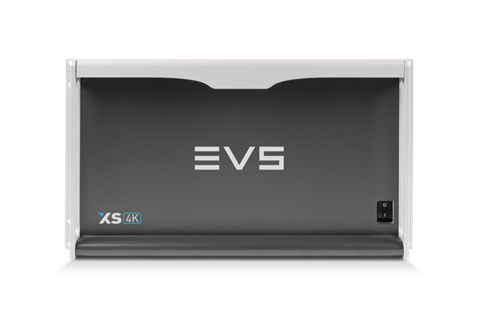 While SMPTE standard 2110 is being adopted for uncompressed UHD transport, the standards body is also working on a 24G-SDI interface.

Blackmagic Design has continued to build SDI rather than IP into its product and at NAB hoisted an 8K flag on the back of it. A $10k version of its ATEM switcher, dubbed Constellation, features 40 x 12G-SDI inputs, 24 x 12G-SDI outputs. It also features a convertor to scale HD or UHD sources into 8K.

ATEM: Can scale HD or UHD to 8K

“This switcher is so incredibly big that we think customers will love it, even if they don’t need to do 8K production,” said Grant Petty, Blackmagic Design CEO, a point he also made about the firm’s new 8K disk recorder HyperDeck Extreme.

Blackmagic pitched this sub-$5K appliance as the centrepiece of live production, broadcast and digital signage and focussed on its HDR capabilities. It has scopes for monitoring different HDR formats (PQ and HLG) and for tagging files according to the ST2084 standard. To reduce the costs of handling 8K data volumes, the HyperDeck uses H.265 to compress the video into files with compression ratios ranging up to 285:1.