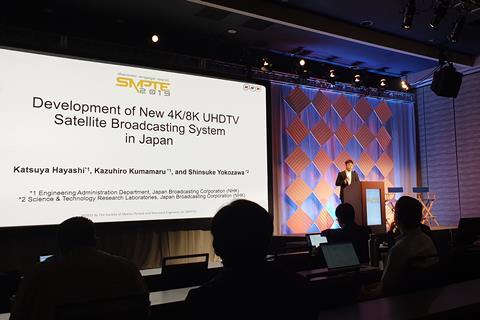 NHK developed its own 8K camera system after the Japanese broadcaster decided to shoot upcoming sports broadcasts in the country in the format. AT SMPTE 2019, NHK spoke about the key elements of the format.

During a presentation at SMPTE 2019, speakers from NHK highlighted some of the challenges of shooting in 8K, but said efficiencies would help the broadcaster mass-produce the high-quality 8K programmes

“The Tokyo Olympics will be held in 2020,” said NHK engineer Shingo Sato. “The government decided we should show these events in an 8K broadcast.”

He went on to say NHK had developed its own camera set up to shoot in 8K, with the first shoot on 1 December 2018 and the Rugby World Cup, which is currently ongoing in Japan, also using the format.

“NHK creates a wide range of content across a wide range of genres,” he added. “In order to capture large contrast ratios between light and dark areas in a single scene, we needed high dynamic range.”

NHK collectively refers to 4K/8K as “Super Hi-Vision”, and said it is a major step in transitioning viewers to what the broadcaster is calling a “New era of full-scale super high vision”.

The picture quality of the broadcasts is up to 16x greater than that of HD, with audio delivered in 22.2 multi-channel. NHK is broadcasting in frame rates of 59.94, 60 and 120P, he added.

The camera “improves efficiency of workflow on location” said Sato, who was speaking at the SMPTE 2019 conference. “We plan to mass-produce high-quality 8K programmes.”

NHK started broadcasting 4K/8K UHD on December 1 2018. It has been using a specially developed satellite broadcasting service to deliver the UHD content, according to Sato’s colleague Katsuya Hayashi who also gave a presentation on 8K.

8K provides a number of advantages for the viewer over 2K HDTV, he said, including a potential wider viewing angle (100 degrees over 30 degrees) and more pixels.

Hayashi gave a break down of all the key specs for NHK’s Super Hi-Vision broadcasts, which is based on ISDB-S3 systems. The full slide show can be found on SMPTE’s website:

“The margin from maximum output power of TWTA is necessary to transmit distortion-free ISDB-S3 (16APSK) signals,” he explained.

“Transmission experiments in research on satellite broadcasting systems, using the BSAT-3 series transponders, were conducted before the test broadcast. Rep. ITU-R BO.2397-0 was issued for these experiments.”

But NHK did face some challenges, said Hayashi, including a shortage of available frequencies which created a problem with kicking off 4K broadcasting on BS RHCP radio waves.

“There were no free channels for six operators (NHK and five commercial broadcasters) to implement 4K broadcasts with the same RHCP radio waves as existing BS broadcasts,” he said.

This led to a number of channel reallocations in Japan.

“We introduced the process from standardisation to the start of 4K/8K satellite broadcasting and the technologies under development for the broadcasting that recently started in Japan,” he concluded. “In Japan, spreading left-handed polarization reception system and 4K/8K receivers is a future challenge, and it is particularly important to introduce lefthanded polarization reception system into existing condominiums.