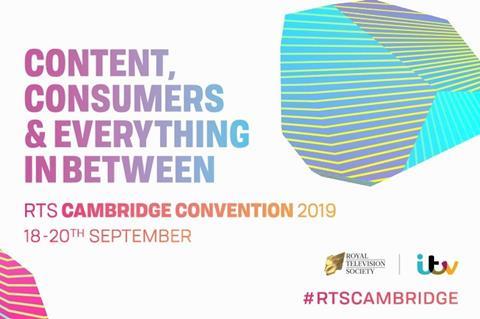 The conference, which kicks off on Wednesday 18 September, will be opened by RTS chair Tom Mockridge at King’s College, Cambridge.

The opening session, which features ITV CEO Carolyn McCall, is titled “Content, Consumers and Everything in Between”. It will look at the challenges and opportunities for the television industry in a fast-changing world and is being co-chaired by journalists Susanna Reid and Ranvir Singh.

Other standout speakers from across the show include Channel 4 CEO Alex Mahon who join BBC Studios chief executive Tim Davie; Tim Hincks, Co-CEO, Expectation and Stephen Lambert, CEO, Studio Lambert for session titled “Running on Empty” which will look at the current landscape of unscripted content.

At her final Cambridge as CEO of Ofcom, Sharon White will be joined by Journalist and Broadcaster Julie Etchingham to discuss the challenges facing the industry. White is due to step down from Ofcom to join retailer John Lewis next year.

Day two kicks off with an international keynote from President and CEO of Discovery David Zaslav. Kate Silverton, Journalist and Broadcaster will discuss Discovery’s move to direct to consumer with Zaslav, and its ambitions to serve global audiences.

Next up journalist and writer Kirsty Wark will explore the revolution in consumer behaviour and the implications for producers in a session titled “The Rights Stuff”. A panel of industry heavyweights will join her including Julian Bellamy, managing director, ITV Studios; Howard Davine, former EVP, business operations at ABC Studios; Dan McGolpin, controller, programming and daytime, BBC; and Jane Turton, CEO, All3Media to debate what the rise of SVODs will mean for UK broadcasters and producers, and who will control rights in the new world order.

Sky Group chief executive Jeremy Darroch will deliver a keynote, chaired by The Times deputy business editor Graham Ruddick highlighting the need to disrupt in order to succeed in an increasingly competitive world.

Journalist and broadcaster Piers Morgan will open the afternoon sessions, followed by a keynote from Channel 4’s Mahon who will discuss the important role and relevance of Channel 4 in the broadcasting landscape with former ITN CEO and editor-in-chief John Hardie.

The final day will start with an international keynote from CEO of Netflix, Reed Hastings. Hastings will be joined in conversation with Kirsty Wark to outline the investment in storytelling, production and talent which helps Netflix keep its crown as Queen of the SVoDs.

The conference will then close with a session titled “Diversity is Dead, Long Live Diversity”. This will see Karen Blackett OBE, UK Country Manager, WPP UK and chairwoman, MediaCom, UK & Ireland and Sir Lenny Henry, actor, comedian and diversity campaigner will then together explore what needs to be done to drive diversity in the industry, a year on from Henry’s impassioned call to arms.