How will cinema’s Covid crisis impact broadcasters and OTTs?

Studios are delaying cinema release dates due to Covid-19, leaving the cinema industry on a precipice. But what impact will this crisis have on broadcasters and OTTs? 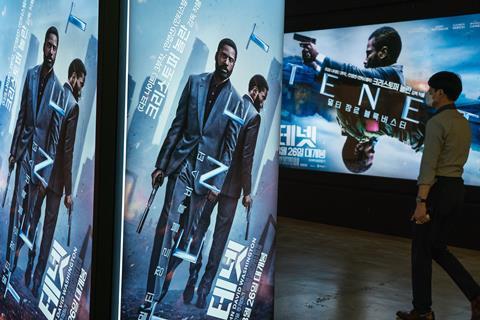 Tenet: Took $323m but didn’t give cinema the boost it needed

The rise of OTT video services has often opened discussions of a battle between streaming and cinema, with some feature films released on Netflix or Amazon Prime instead of at your local Odeon or Cineworld.

But if it was a war between streaming and cinema as the platform of choice for media companies, then coronavirus may have just made the decisive contribution.

Covid-19 has had a game-changing effect on industries across the globe, but large-scale events – especially those taking place indoors – have almost completely ground to a halt in 2020. That includes cinemas, which spent much of the year closed due to the coronavirus.

Even now, when the biggest cinema chains have reopened, they have been forced to greatly reduce numbers due to social distancing. Worse, though, has been the impact on the summer release schedule, which has been pretty much annihilated due to the pandemic.

Major studios, foreseeing challenges with releasing their multi-million-dollar properties in the current environment, have delayed or, in some cases, cancelled cinematic release plans, leaving your local cinema bereft of big money options.

Tenet, the time-based action spectacle from director Christopher Nolan, was a possible jolt that could electrify the flailing cinema industry. Yet despite its release across 62 international markets, the Warner Bros. flick has pulled $323.3 million (including $30 million in IMAX) as of last weekend. That is against an estimated budget of $205 million – making it one of Nolan’s worst performing films of his career.

This came despite positive reviews – the film holds a 71% fresh score on Rotten Tomatoes and 7.8/10 aggregate rating on IMDB.

The knock-on effect has been almost instant. Warner Bros. itself has already delayed the release of Wonder Woman 1984, originally due in November, back to December. Fellow superhero flick The Batman has been bumped into 2022. Other studios have followed suit, too, with the next James Bond film – No Time to Die – arguably the biggest setback for cinema chains, while sci-fi epic Dune – originally due for a December release – will not hit screens until October 2021.

It may not all be bad news for the multiplexes, however, according to Ampere Analysis analyst Peter Ingram.

“Major film postponements, despite being bad news for cinema-chains short term, are still a vote of confidence from studios in cinemas,” he tells IBC365.

“An alternative is for studios to release titles on Premium Video on Demand (PVoD), which although a valid option carries the risk of reducing the total purchases as multiple viewers will be able to watch a film under a single transaction.

“By delaying until next year, studios are signalling to theatre owners that providing they can weather the problems of the winter hiatus, their business can still emerge largely intact from the pandemic in (hopefully) spring.” 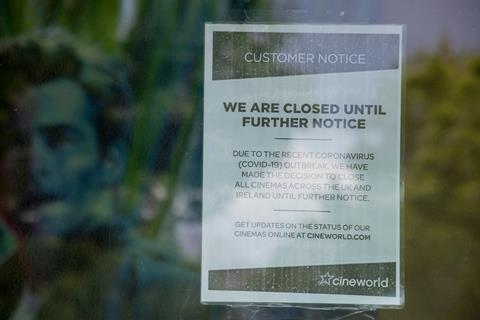 CIneworld: Just one of a number of chains to shut down in the crisis

Cinema viability
Of course, in the short term, the impact has been hard on cinemas. Cineworld, which operates cinemas in 10 countries, has announced that it will be suspending operations at all of its 536 Regal theatres in the US, as of Thursday, 8 October 2020.  It also announced closures of its UK venues due to “an increasingly challenging theatrical landscape”.

“This is not a decision we made lightly, and we did everything in our power to support a safe and sustainable reopening in the U.S.– from putting in place robust health and safety measures at our theatres to joining our industry in making a collective commitment to the CinemaSafe protocols to reaching out to state and local officials to educate them on these initiatives.

”We are especially grateful for and proud of the hard work our employees put in to adapt our theatres to the new protocols and cannot underscore enough how difficult this decision was,” said Mooky Greidinger, CEO of Cineworld.

The shutdown has thrown doubt on the viability of the world’s second biggest cinema chain, with analysts from Bank of America “the group could run out of cash in November or December” unless it sees an injection of cash.

It is a similar story at rival Odeon, which has opted to only open cinemas for three days a week, in the hopes of continuing to bring in some money, despite a dearth of new releases.

The head of the UK Cinema Association said he feared the Cineworld closure was “indicative of challenges faced by the entire UK cinema industry at the moment”.

Phil Clapp said: “Although cinemas opened in July and have been able to deliver a safe and enjoyable experience, without major new titles then we understand we aren’t able to get as many people out of the home as we’d like.”

OTT or No-TT?
The idea of “Streaming vs cinema” is hardly new, but this latest challenge for the big screen coincides with the year of the OTT, where several of the world’s biggest media companies and broadcasters (Disney, NBCUniversal, WarnerMedia) have launched new VOD platforms.

We’ve already seen how this can impact content release schedules, after Disney announced plans to offer Mulan as a premium release on Disney+ - though it is important to note the live action remake was also released in cinemas in China and other markets.

In the West, Mulan was limited to a $30 fee for Disney+ subscribers or offered on other platforms such as Google Play. Was it a success? Disney has yet to release figures showing how many people have paid for Mulan, but we can look at Disney+ signups.

According to app download research firm Sensor Tower, Mulan drove an increase of 68% in new downloads of Disney+ from 4-6 September. But subscription metrics firm Antenna compared it with sign-ups for Hamilton – one of Disney’s other major releases on the streaming platform – and found it had driven just a tenth of sign-ups as the Broadway musical did in July.

“The key metric here is purchase, which is what Antenna measures,” Rameez Tase, co-founder and CEO of Antenna, told Observer. “Viewership is an increasingly antiquated proxy for purchase behaviour. The measurement of success in any industry that relies on consumers directly spending their dollars on goods and services is oriented around purchase behaviour, and we believe that the future of media will be no different.” 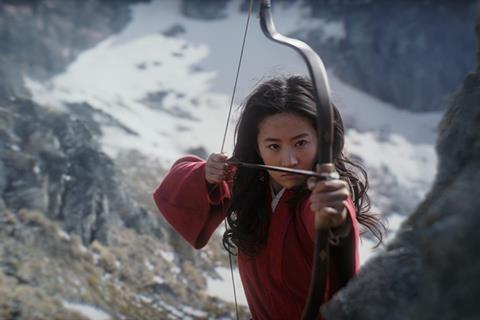 Disney+: Mulan might not have been the PVoD success it was hoped to be

On top of this, Mulan is estimated to have taken around $66 million at the Box Office. The film “underperformed at the box office in markets where it was released theatrically, due in part to consumer concerns of returning to cinemas as lockdown measures ease”, explains Ampere’s Ingram.

“The same is true of its Disney+ PVoD release,” he adds. “This is partly linked to the fact that consumers had to have a Disney+ subscription before purchasing Mulan. Another important factor is the decision to publicise that the title will be available free with a Disney+ subscription from November. This is far more rapid than the normal wait-time before a first-run film enters the subscription window and will have contributed to many consumers delaying watching until it’s available without the premium price.”

The knock-on effect
For broadcasters and OTTs, the impact of this new threat to cinemas will mixed. The delay to cinema release dates will have an immediate knock-on effect for OTT and broadcast release schedules, especially for the likes of Sky in the UK which has major partnerships with the biggest studios to pick up their new releases first.

Philippa Childs of entertainment and broadcasting union Bectu says: “The delay in the release of the Bond film along with the other delayed releases has plunged cinema into crisis.

“Studios will have to think carefully when considering release dates about the impact that will have for the long-term future of the big screen.”

And in that lies the challenge for broadcasters. With cinemas delaying or retooling release plans, studios will also have to reassess their schedules. The knock-on effect of the current cinema crisis will carry over to broadcasters who are already facing challenges from the collapse of the advertising market

Ingram explains: “Broadcasters have been forced to adapt their original content and acquisition strategies in-line with the limits the pandemic has caused for production. However, the wide appeal of exclusive first run titles remains valuable for broadcasters to draw consumers, and these will be in shorter supply until the industry recovers.”

With all the three biggest American cinema chains (AMC, Cineworld and Cinemark) now turning to banks or other lenders for financial support through this crisis, the world of cinema as we know it is certainly under threat.

“Major film postponements, despite being bad news for cinema-chains short term, are still a vote of confidence from studios in cinemas,”  Peter Ingram

But what is the solution? Jeffrey Bock, an analyst with Exhibitor Relations, told the Financial Times that the major media companies could step in and invest in the cinema chains. “If Disney bought AMC, there’s no reason why they could not show The Mandalorian 2 in theatres on opening weekend, and then start streaming it after, and they would make so much money,” he explained.

But this poses its own challenges, including questions about exclusivity and competition. If Disney were to buy AMC and WarnerMedia (owned by AT&T) buys Cineworld, what happens to other studio releases? And what happens to the industry as a whole?

What is clear is the future of cinema as we know it is under threat, and that is a threat to the entire ecosystem.

“The difficulties faced by theatrical exhibitors will have a knock-on impact on broadcasters as the lack of new content will impact the value of studio output deals,” Ingram explains. “The studios will be more dependent on older content to fill these deals. This will also lead broadcasters to rely on older, less valuable acquired titles to fill broadcasting hours.

“Many key areas of the entertainment ecosystem are going to be challenged by the current climate. The size of the total theatrical market has contracted heavily from what it had generated globally in 2019 as a direct consequence of pandemic-linked screen closures and changes in consumer habits.

Audience engagement and viewing for home entertainment has been boosted across the board including streaming platforms, broadcast TV and pay TV - the test here will be to see if these companies are able to maintain these gains as restrictions lifted during the recovery. However, all entertainment forms that are reliant on mass gatherings will see heavily reduced attendance and therefore revenues in the near-term.”

From virtualised production to workflow innovations, explore key topics across the technology, media and entertainment industries with our free IBC365 Webinars.