The cloud gets crowded

The cloud allows for revolutionary gains in speed, flexibility, and collaboration, with the industry on a fast track to deploying workflows with Google, Microsoft and Amazon. So it’s little wonder that NAB has been awash with new launches based on cloud technology.

Video workflows for sports, news, film and entertainment are moving rapidly to the cloud and NAB was awash with ways to achieve it. 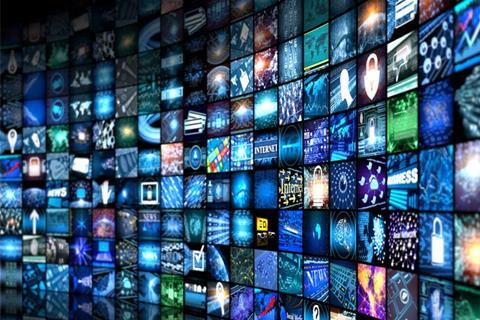 Intel: ”Media will become a building block for set of intelligent visual experiences”

There are many benefits for doing so but Intel’s Lynn Comp summed it up best in a keynote delivered at NAB.

In future, she said, media will become a building block for a set of “intelligent visual experiences” that go way beyond content streaming to the TV. “We move from a world of passive consumption to something that is much more interactive and immersive. In addition to traditional media processing and delivery, the agile, flexible visual cloud encompasses workloads such as analytics, immersive media, cloud gaming and graphics.”

It’s no coincidence that Intel has termed its cloud service ‘visual cloud’ of which Comp is the general manager but her point is salient.

The intense competition for new SVOD services from AT&T, Disney and Apple versus incumbents Amazon and Netflix will shift from conventional high-end unscripted and drama shows into new immersive storytelling formats such as 360-degree and augmented reality. These will be produced in ever-more visually stunning cinematic ways with higher resolution, HDR and high frame rates.

“By integrating our products with Google Cloud, we are opening up production in the cloud to new global markets.” Angel Ruiz, MediaKind

Netflix’s burgeoning slate of nonlinear programming is a prime example. Bandersnatch should no longer be considered an experiment, more like a future of entertainment in which programming will be made and delivered in increasingly personalised, contextual and just-in-time ways.

And Cloud? It’s the only way to handle the massive increase in data.

The hosts
Google, Microsoft and Amazon were everywhere at NAB. You’d be hard pressed to find a vendor in storage, asset management, video acquisition, playout and more which does not have its kit plugged into one or more of them.

Honeycutt has been tasked with getting film studios, distributors, and telcos to shift their workflow to Google Cloud. MediaKind is one customer which has launched Cygnus 360º-as-a-Service for anyone wanting to process live 360º video at up to 8K resolution. “By integrating our products with Google Cloud, we are opening up production in the cloud to new global markets where cost and ease of integration are big factors in deciding which solution or product to choose,” said CEO Angel Ruiz.

Amazon is the biggest media player in this area with more than 60 companies on the NAB show floor demonstrating what they are doing with AWS. It offers facilities the ability to deploy a creative studio in the cloud for VFX, animation, and editing workloads. Machine Learning (Amazon ML) and AWS Elemental Media Services process sports content to extract metadata with activity and object detection for enhanced live sports coverage. Demonstrations at NAB incorporated automated highlight clipping and on-screen graphics creation.

Unlike Amazon and Google, Microsoft wants to be seen as a little more independent. “We’re not in the business of content creation or content ownership,” said Sudheer Sirivara, General Manager, Azure Media. “We want to provide platforms to help content creators and owners achieve more.”

Intel is the new kid on the block, using NAB to announce the Open Visual Cloud. Intel described this as an open source project with reference pipelines for CDN transcoding and video ad-insertion on launch with VR, interactive raytracing, and cloud gaming to come.

Storage, transcoding, transcription
Most media companies will come into contact with the Cloud first to accelerate storage capacity. We need to become familiar with terms like hot storage, which keeps media in the cloud ready to go in an instant. It’s like the term online for on-premise storage and is distinguished from a ‘cool’ storage tier (nearline) for material accessed less frequently. Archive is archive but this too is about being the best fit for the data centre.

Quantum claimed its most significant product launch in more than a decade with a new storage line based in the Cloud. Its F-Series of flash drives are run on Quantum’s own Cloud Storage Platform to support performance-intensive workloads like UHD editing and rendering. It comes with Quantum’s file system StorNext which offers things like data protection and an automated tiering of data to optimise storage capacity.

XenData teamed up with Wasabi to offer a hybrid cloud archive service. The joint Cloud File Storage Service is operated by Wasabi, a cloud provider that sells storage services compatible with Amazon’s S3 storage platform, with pricing from $0.01 per GB per month based only on the volume of data stored in the cloud and no charges for uploads or downloads.

Content providers and posthouse have a choice to make when it comes to investing in storage options: expand more on premises capacity; offload everything to the cloud or maintain a hybrid of the two. The latter is seen by many as a sensible halfway house in which content can be managed locally or by a cloud provider of choice, with users in control of what content should be stored where.

Broadcast metadata and transcription specialist Take 1 launched Take 1 Cloud, for video transcription workflows. The standard features of this product enable broadcast and production companies to use a web-based interface to transfer video assets, add comments or instructions for specific projects or media files, monitor the status of work in progress and retrieve completed outputs.

For clients with ongoing contracts or high volumes of work, the platform’s features automate large parts of the workflow. It can automatically scan and transcode clients’ video projects as soon as post is completed and, when transcription or localisation services are requested for these projects, automatically trigger the associated tasks.

Broadcast engineering stalwart Evertz has launched what it described as a collection of on-demand and ‘pay-as-you-go’ cloud native services for broadcast customers. Evertz.iO is a serverless system (at least in so far as the servers are virtualised in the cloud) and will offer services such as technical metadata generation, content moderation, audio transcription, scene detection and text detection applications, the company explained. It has partnered with Interra System to offer automated QC in the cloud.

Forbidden Technologies has also added Microsoft Azure to its own cloud video platform Blackbird, a move which is said to increase the speed of cloud workflows such as viewing, clipping and publishing video online. Among companies already using Blackbird on Azure is Deltatre, which uses it to accelerate delivery of live and on-demand video highlights to sports fans. 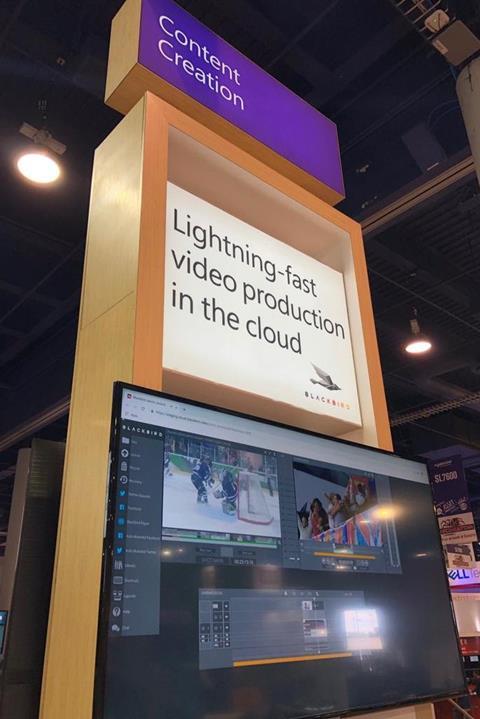 Collaboration across geographic boundaries is one benefit of a cloud-based approach. Intelligence in the form of metadata-aware or AI-driven media asset management software can be layered on top. Storage and MAM vendors have been tying the knot to offer such a combined product.

“Bringing talent to known creative hubs such as Los Angeles, New York or London’s Soho is not a cost-effective cure for facilities,” said Andy Liebman, founder, and CEO, EditShare. “They need to be able to [gain access to] talent wherever they are located and, if need be, bring them into the creative process remotely.” EditShare’s Flow MAM targets this problem and boasts cloud-based workflows in Azure, Google, S3, Wasabi, and Backblaze.

Wireless links developer Dejero was showing the ability to bring AI to live content by hooking IP video links into Microsoft Azure via its video encoders and receivers. Once in Azure, metadata tagging, facial recognition, and speech-to-text functionality is enabled using Microsoft’s Media Services Video Indexer, with the result spat out to newsrooms keen to introduce automation to save time and reduce costs.

“Broadcasters at NAB have a particular interest in the ways cloud virtualisation models can help them pursue new avenues in a ‘test-bed’ environment.” Kris Barker, Arqiva

Sony thinks news organisations, and ENG crews in particular, are ready to move to the cloud. It is offering its Ci cloud processing platform and XDCAM Air content acquisition tool. Content can now be transferred via wireless transmission directly out of the camera into Ci. Other new features include algorithms for object recognition and speech-to-text technology to help eliminate manual logging and transcription processes.

Sony has also developed a mobile app called XDCAM Pocket that “turns any phone into a cloud-ready XDCAM camcorder”. With it, users can stream content shot with smartphones back to base over mobile networks.

Playout in the cloud
Broadcasters are shifting to IP-based workflows and embracing the cloud for full scale channel operation.

“Broadcasters at NAB have a particular interest in the ways cloud virtualisation models can help them pursue new avenues in a ‘test-bed’ environment,” says Kris Barker, Head of Product Development, Satellite & Media at Arqiva. “They will explore these future cloud-based systems, looking for the virtualisation services that offer the flexibility to rollout new channels quickly and affordably, and the scalability to pull them down when those habits shift.”

Qvest Media has new range of cloud package for live event production, post production, archiving, disaster recovery or playout. Qvest.Cloud, for example, is for companies that want to efficiently orchestrate, manage and monitor their media technology, either on-premise, with a single cloud provider, in a multi-cloud environment, or using a hybrid model.

Telestream believes that currently, service providers and content aggregators are turning business away due to not being able to create channels quickly for short-term events. Its Channel-as-a-Service Optiq collapses months of installation and preparation to minutes. One scenario sees content providers that want to have the choice of which cloud provider to use: many do not want to be tied to a single provider or want to migrate away from or de-risk their current provider, but simply do not have the choice. The intention is that OptiQ will support most major cloud providers, in addition to on-premise data centres at a later stage.