The ‘Killer App’ for 5G hasn’t been invented yet

IBC2018: Telcos debate how best to take advantage of the forthcoming roll out of 5G services.

2019 could be the tipping point for 5G mobile technology with services set to be deployed in 2019 by many telcos. Korea Telecom will launch next year, and BT, Three, and Deutsche Telekom are all promising service introductions in the next year or so. 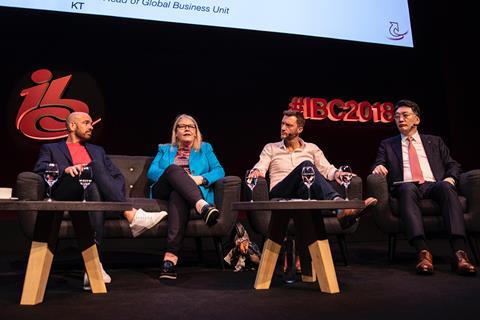 Each of the companies were represented on panels at IBC. Panel chair Mark Smith asked his speakers what they were going to do in the 5G world to ensure that the likes of Netflix stopped sitting atop the network and “stealing the cream?”

Three’s Head of Digital Entertainment Christian Harris urged delegates to start thinking giggles not gigabytes, and to stop talking about engineering. “We have to stay relevant. We must be more personal, and engage with our users.”

KT Corporation EVP/Head of Global Business Unit Mark Hyung-Joon Kim showcased a portfolio of applications developed over a three-year period ahead of the PyeongChang Winter Olympics.

The offerings included highly focussed ‘time-slice’ images from many of the events, including VR and 360 degree video, and immersive coverage of the sports events, and he said that these new services would be part of their offerings. They are also looking at using 5G for autonomous vehicles and connected cars.

“We don’t want to be the dumb pipe for others” Matt Stagg, BT Sport

KT Corporation was also opening city centre retail shops where consumers could test and try 5G services. KT Corporation was also in discussion with sports federations about including its 5G-based VR/AR and similar applications. However, they were also focusing on potential B2B users and uses for the new bandwidth. “Enterprises first, then evolving to consumers,” he said.

However, as to what additional services BT might offer, he told delegates that, “The killer app for 5G has not been invented yet”.

“We have to stay relevant. We must be more personal, and engage with our users” Christian Harris, Three

He also agreed that some customers wanted their existing service ‘not spots’ fixed ahead of worrying about 5G.

He also appealed to delegates in the room to talk to BT about their services. “But we know we can no longer take months and months to bring a new 5G service to the user. We all have to challenge ourselves to bring new players to our table. But to date we are so far behind the OTT. We are not even at first base. And we don’t want to be the dumb pipe for others.”

Three’s Harris said his network had some valuable benefits in that they were totally wireless-focussed, but it was still going to be a challenge if UK regulator Ofcom’s suggested forecasts for a user’s data consumption hit the 50, 60 or even 90 GB per month levels.

“But what will be on offer? Is it just more Facebook, Snapchat or Instagram? What we do want is to love our customers, and for them to love us and to stay absolutely relevant to the market.”

Deutsche Telekom’s VP of TV Business Europe Anette Schaefer added that in some of her non-German overseas markets 5G would permit a leap-frogging over older technologies, although she did not underestimate the challenges of swapping out in-home receivers, routers and gateways.

Watch The rise of video and the role of telcos