The demand side of the industry is continuing to go through a radical shift, with changing revenue models influencing trends in media technology investment, according to the IABM Buying Trends Report.

4K/UHD production and delivery has been singled out as the technology priority by technology users, while multi-platform content delivery remains a key priority, particularly for broadcasters. 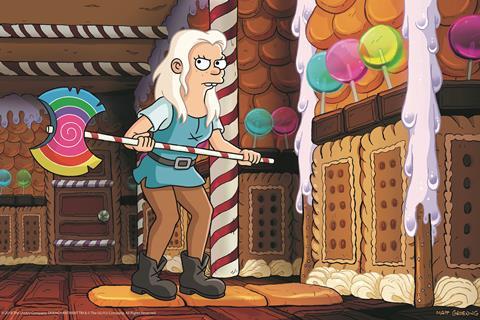 Disenchantment: In 4K on Netflix

The technology trends were highlighted against a backdrop of revenue growth in the media sector despite worsening profits, compared to the figures reported six months ago.

With regards to revenues, the impact of major sporting events in 2018 has arguably acted as a positive driver of advertising revenues. Profits continued to be under pressure as their growth rate further declined to -2.6%. The impact of the rise of online media – including OTT and other online video platforms – is biting into profits. More specifically, this pressure has prompted broadcasters to launch new initiatives while maintaining their traditional offerings.

This has had an influence on costs as these generally scale with increasing audiences. Profit margin distribution gave additional signs of deterioration as the percentage of companies in loss in the last year has increased from 11% to 18%.

These are the findings of IABM, which as part of its wide portfolio of business intelligence services to members, IABM conducts a survey on buying trends twice a year – immediately prior to NAB Show Las Vegas and IBC. The results of this survey are included, along with a financial analysis of the broadcast and media sector, in the IABM Buying Trends Report. The full report is available to IABM members only; the following is a snapshot of the Report’s key findings.

The traditional business models of this industry – advertising and subscriptions – continue to be under competitive pressure from new media, which includes online video platforms and digital advertising behemoths such as Google and Facebook. In 2018, investment in creating new content has grown to record levels, further threatening the broadcast ecosystem. IABM data shows that this is continuing to influence the advertising-based business model (i.e. Media Networks) more than subscription-based Pay-TV services.

The major trends uncovered – the move to Build-it-Yourself, the growing impact of emerging technologies and changing business models driven by the rise and rise of OTT, will be further explored at the IABM’s Annual International Business Conference on 6th and 7th December. Places are still available at this business-enhancing event that brings together leaders from the supply and buying sides of the industry to plot a successful path forward for everyone.

IABM geographical analysis showed that companies in both EMEA and the Americas are outperforming those in APAC. Indeed, the situation in Asia-Pacific is more negative as both revenues and profits declined markedly – by 10% and 28% respectively. This is a significant worsening compared to the last report. 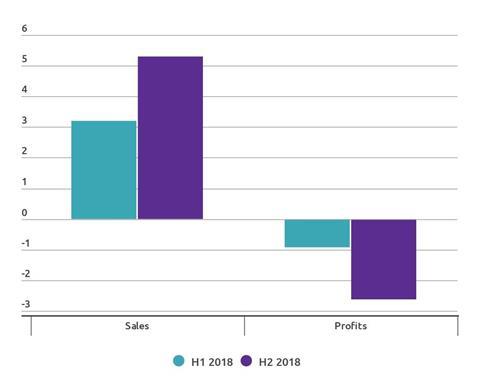 The continued pressure on financials did not influence optimism on the demand-side. In fact, 83% of respondents to IABM’s IBC2018 survey reported a positive outlook for the business environment. This is in stark contrast with the situation on the supply-side, where negative financial performance indeed had an impact on suppliers’ confidence. Despite the enormous change affecting the industry, buyers remain confident that they can turn increased competition in their favour, relying on their core strengths. 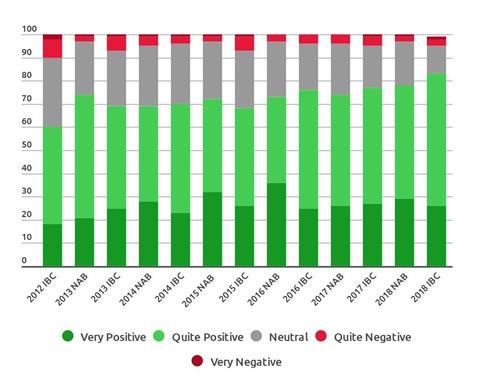 This positive sentiment is reinforced by the positive outlook for advertising and government revenues – the outlook for subscriptions was subdued in this survey. However, the shift to new media revenues (i.e. multi-platform content delivery) continues, with both broadcasters and production/post-production companies predicting an increased reliance on these for the future. Media companies will therefore have to continue to manage the delicate balance between new media and legacy (broadcast) revenues, which is linked to their financial performance. 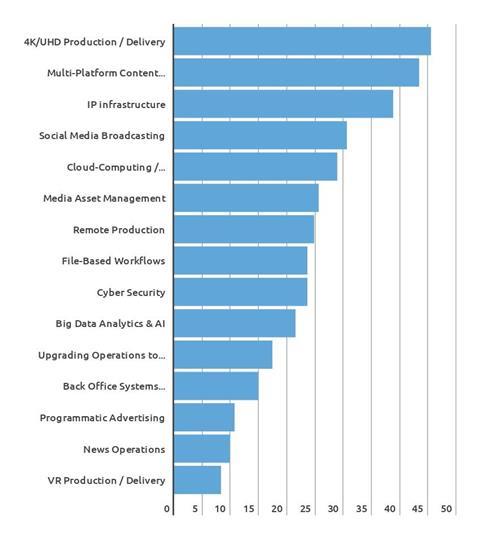 4K/UHD production and delivery was selected for the first time as the most important technology priority by technology users. This is consistent with the upward trend in 4K/UHD adoption shown by IABM data and the increased investment in premium content by new media operators – i.e. companies such as Netflix and Amazon now demand content in 4K/UHD. Although 4K/UHD is yet to become mainstream, IABM’s latest survey evidence showed that 2018 was a key year for its adoption, both on the production and delivery side of the business. As mentioned earlier, the occurrence of major sporting events contributed to incentivize delivery in the higher resolution format. On the production side, more investment is also expected as media companies continue to pour money into premium content.

Multi-platform content delivery remains a key priority, particularly for broadcasters. With stretched budgets and shortened timescales, the workings of media companies are starting to resemble those of a factory, where efficiency and speed are paramount. In fact, efficiency remains the main strategic driver of technology purchase for buyers. But it’s not just about efficiency - media companies also continue to look for solutions that speed up their operations. That is why agility was ranked as the second most important driver of technology purchase alongside total cost of ownership.

Modern media supply chains are characterized by a high reliance on IT technology to connect operations. IABM data shows how IT technology already makes up more than half the Capex budget that users dedicate to media technology. This reliance on IT, which has grown in recent years, presents media companies with some challenges.

One challenge is cyber security, which is increasingly taking center stage in the media industry. Almost a quarter of end-users told us that they have suffered at least one attack in the last three years. Although this is lower than previous surveys, it still shows how the threat is relevant to buyers – most of them report that cyber security is a top priority in media technology spending.

Another challenge is interoperability. With regards to this, end-users are increasingly developing technologies in-house to suit their custom needs – most of them still report a preference for best-of-breed solutions. Although buyers are still looking for the dedication, support and flexibility provided by specialist suppliers, 98% of technology users demand interoperable solutions. On average, 40% of the solutions that end-users need are built in house – up from 37% in IABM’s previous survey. Most of them also plan to increase their software development investment in the next year. 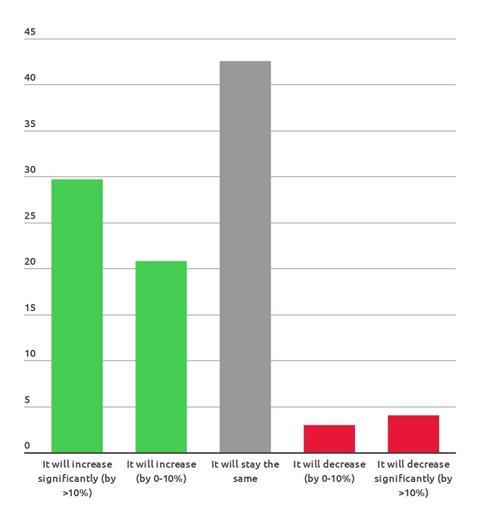 The move to next-generation infrastructures also requires end-users – like suppliers – to go through a difficult cultural transition. Although engineering remains the most important department when it comes to buying media technology, it is increasingly becoming a mixture of broadcast and IT knowledge. Also, IABM data shows an increased importance of operations in future decision-making to make organizations more responsive to supply-chain disruptions. This cultural shift should also not be underestimated when looking at the adoption of emerging technologies in the industry.

IABM analysis of technology adoption has various implications, which are reinforced by the data on technology priorities cited earlier. The outlook for UHD has significantly improved as buyers have launched new initiatives to cover the FIFA World Cup.

Emerging technologies such as AI and blockchain remain at an early stage of adoption although the percentage of companies that have adopted AI has significantly increased compared to the last survey. AI adoption continues to focus on content management where it can augment data creation through, for example, automated metadata tagging.

Adoption of IP and the cloud has increased as well as media companies move to virtualized infrastructures. These technologies are enablers of new business models to achieve remote production, shared content access, quicker service deployment etc.

Although technology investment has shifted to new priorities, technology has never been so key to driving business success in the multi-platform world. Buyers’ continued adoption of new technologies requires suppliers to move to new business models centered on the flexible provision of software. With change, the future is bright as greater investment is poured into content.