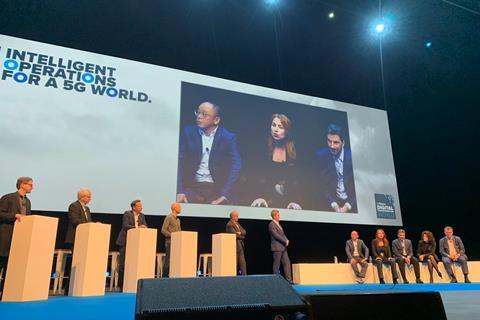 TM Forum panel: Experts discuss the merits of 5G and the need for collaboration

The TM Forum held its Digital Transformation World event in Nice last week. It is typically billed as a key event for telcos, solution and network providers to collaborate and foster innovation based upon the TM Forum’s framework for best practices and standards. Similar to Mobile World Congress, the event focussed on intelligent operations for a 5G world.

This was perfectly timed given the race among many telcos to launch 5G. There’s rarely a day that passes, without an announcement on 5G. It is apparent that 2019 is the year of 5G launches, but telcos need to transform their operations in order to better serve customers and deliver on their own expectations.

One of the main highlights from the event was a keynote panel that put a group of telco CTIOs up against representatives from key verticals. The verticals highlighted the new use cases underpinned by 5G.

Founder of gaming company Hatch, Vesa Jutila said that the merits of 5G with low latency, quality and bandwidth will take gaming to the next level. But urged telcos to reduce fragmentation given the complexities and numerous legacy systems they have suggesting that if they don’t, then they will go to another provider.

While according to BT Sport COO Jamie Hindhaugh, 5G is an enabler that offers creative opportunities (such as live images from the team bus while heading to the ground). And network slicing (virtual fibre) leading to media production and distribution capabilities being transformed; all about delivering more content.

McLaren applied technologies chief technologist Paul Spence cautioned the role of 5G indicating that it needs to prove itself in order to be safe and reliable when it comes to autonomous driving.

Martin Brynskov who is the chairman of the Open and Agile Smart Cities organisation suggested that access to data is crucial and that telcos need to share the risk and play fair with both the cost of deployments and access to the data gathered.

The messages among telcos were broadly consistent. The business case remains unproven given the significant costs in deploying new networks. While at the same time asking consumers to spend more on faster connections and new services is becoming harder and harder. 5G represents a new way of working and collaborating with partners which is key to long term survival. However, some telcos feel extremely frustrated with the lack of speed by network vendors to deliver new pieces of kit. Furthermore, AI will be transformational but telcos first must transform their own processes and more importantly culture within the organisation.

With this in mind, all eyes were on Rakuten Mobile chief technology officer Tareq Amin, who is spearheading what the company claims is the world’s first cloud-native mobile network in partnership with business and operational support systems provider Netcracker. Announced at this year’s Mobile World Congress, Amin said that its OSS platform is built on open adaptors, plug and play, AI and machine learning capabilities at the core, with minimal fragmentation. Interestingly, he believes that “the level of automation that we have done is one that the industry has not seen.” This has helped reduce its 5G network spend by 60-80% compared to traditional providers. Being a greenfield operator means it doesn’t have to deal with legacy systems and processes that traditional telcos face. But it is unproven as the network is not live. The commercial launch is scheduled for October. However, it is a refreshing new approach to serving customers in a different way.

For sure, 5G opens up new use cases and allows businesses to transform their own operations to better serve users. This was best demonstrated through the catalyst programmes which are proof-of-concept projects bringing companies together. The objective is to create innovative solutions leveraging key TM Forum best practices and standards.

The TM Forum has been working closely with other verticals building upon its 30-year heritage showcasing collaboration in telecommunications. Its latest partnership with IBC led to the unveiling of three catalysts which represent great examples of driving open innovation between the telecoms and media industries:

This Catalyst explores ways of creating a pop-up network for delivery of high throughput broadcasting to distant points of fibre presence via mmWave connection. The project investigates how to deliver rich and engaging video-based experiences to users exploring an area of the Roman Baths in the UK and allows a mobile device to view a place as it would have been in the past. Champions: Aardman Entertainment, BBC R&D Participants: Bristol University, Cambridge Communications Systems Ltd., Zeetta Networks Ltd.;

In total, 32 catalysts were demonstrated during the event involving 140 companies. Many of these catalysts are still at an early phase of development. The road ahead is long, and success is not guaranteed.

Worryingly, security wasn’t widely debated at the event, with the rollout of new sophisticated networks that are more software based and considering the recent concerns with Huawei. But the entire industry should address this issue and forge closer ties to find a common ground that all must adhere to. The entire value chain will be vulnerable to cyberattacks.

The event serves as a welcome reminder that telcos are in a state of flux. They need to invest in 5G, but it is more than just a transformation in technology. It requires a radical shift in mindset and company culture. All of this means an increase in costs and the need to invest further with no guaranteed returns, while margins are still being squeezed. Being first to launch doesn’t necessarily lead to a turnaround in fortunes.

Messages such as the need to collaborate, be agile and transform have been heavily discussed for years. For this reason, it feels like telcos are still stuck at the same junction and inevitably need to move more quickly before missing out on any further opportunities that might lie ahead.

Overall, this year’s Digital Transformation World event has shown that 5G is creating new ways to connect and work together as underlined by the catalyst initiatives especially the convergence between media and telco industries.