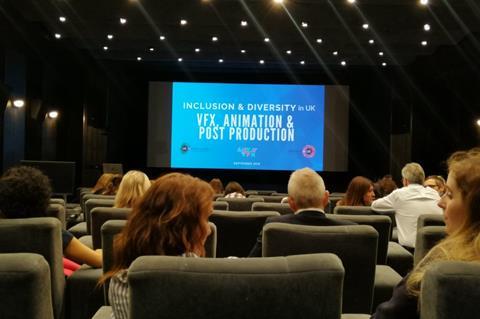 UK Screen Alliance, Access VFX and Animation UK have released a report on the progress and challenges for diversity and inclusion across the VFX, post-production and animation industries.

The report was produced in a response to the Screen Skills Assessment for 2018-19 which called for more granular research after identifying a gap in existing data.

The report documents a significantly higher percentage of ethnic diversity in VFX, post and animation than the overall level of diversity, or lack of it, within the wider film and TV industry.

In VFX, people of colour make up 19% of the workforce and for animation BAME representation is 14% and in post-production it is 18%.

All three sectors exceed the 14% UK average percentage for people of colour in the working-age population.

The survey comprised of more than 1,150 industry professionals to reveal a portrait of diversity that challenges many of the preconceptions about the three creative sectors and the respective progress in creating a more inclusive and diverse workforce.

However, the UK Screen Alliance noted that whilst there has been significant improvement in some respects, there are still areas that require action.

According to the findings there is a strong bias - particularly in VFX - towards the jobs being in London, where the BAME population is 40%, so perhaps 18% doesn’t reflect the local community. However recruitment in these sectors is not local; it’s global.

The UK Screen survey showed that BAME representation was also 18% in the skilled international workforce and specifically within the British-born workforce, UK Screen found that 48% of recruitment is from the nations and regions. 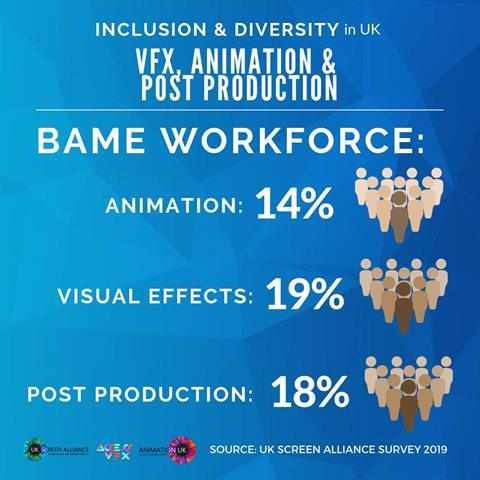 By weighting this recruitment pattern by the percentage of UK BAME workers in the individual regions of the country, UK Screen estimates that the target for proportionate representation of people of colour would be between 16% to 19%, which is exceeded by VFX and only marginally missed by animation and post-production.

He said: “There’s a skills shortage and therefore a strong commercial imperative to discover latent talent from all communities.

“Inclusion in Post, VFX and Animation where longer and more permanent employment models are common will have a very different dynamic to those parts of our industry that crew-up for short-term projects with freelancers through informal networks.

“The recruitment focus in VFX, post and animation is firmly on skill and potential. It is quite rightly less about, ‘who you know’ as the gateway to getting a job.“

Whilst the UK Screen report reveals an encouraging overall BAME percentage, it also shows that people of colour are not as well represented in creative artist jobs and occupy only 8% of senior management roles.

The report also highlights that the representation of women in VFX is well below parity at 33%, but in animation it is 51%.

Some 12% of the report’s respondents identified as having at least one physical disability, mental or neurological condition, with 6.5% having Dyslexia.

Shifting sands
Industry supported inclusion initiatives like Access VFX have clearly had an effect with 81% of people perceiving their workplace as highly or mostly inclusive; a view that is not just confined to the white male respondents.

However, the organisers of Access VFX recognise that there is still much to do on creating a fully inclusive workforce.

Blue Zoo managing director and Access VFX board member Tom Box said: “Access VFX is all about ‘getting stuff done’ but we didn’t have any way to define what ‘done’ means, or measure our progress towards that goal. This report provides the agenda and then guides us towards solving workforce inequality.”

This report has indicated that the key areas on which to focus inclusion and diversity efforts on are different in the three subsectors and found there is also the need for action plans with both short-term and long-term horizons.

Within animation, the gender balance is near parity, the key area to address is BAME representation overall and especially within creative roles. There should also be efforts made to increase BAME representation in senior management, via mentoring and coaching. 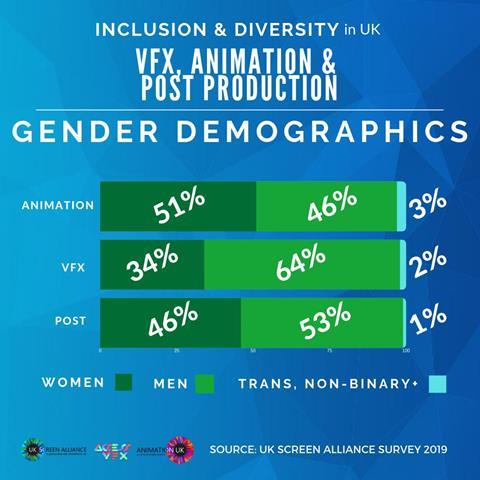 In VFX, the ethnicity statistics overall are appropriately proportionate, but could be more consistent at all levels of seniority. Mentoring and coaching should be targeted to achieve this. Better BAME representation is needed in creative artist roles and senior management.

The full report can be downloaded here.

Diversity is a key issue being discussed at IBC2019. Check out our Lounge Talk on “Digital and diversity: The secret sauce in delivering innovation?” which will take place on September 14 in the Forum Lounge.