The Rory Peck Awards honoured the work of freelancers covering worldwide news and current affairs from Bangladesh, Iraq, Sudan, Syria, the US, Venezuela and Yemen. 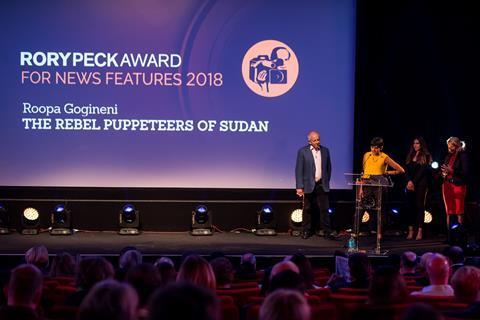 Submissions came from across the globe with stories about violence, terrorism, extremisn and the plight of human survival and courage.

Freelancers are at the heart of the Rory Peck Trust’s mission to support those behind the camera in times of crisis. The awards celebrated the dedicated and emotive work by those who risked their lives to ensure their stories were broadcast.

American freelancer Roopa Gogineni was awarded the Rory Peck Award for News Feature for her unique film The Rebel Puppeteers of Sudan which focusses on the creator of a satirical puppet show to share the news of the ongoing conflict in Sudan’s Nuba Mountains.

Gogineni worked under difficult conditions in extreme heat and around constant bombings, her film remains an original and creative.

She filmed in Sudan during 2016, with the piece broadcast by the New York Times. Judges acknowledged Gogineni’s commitment and risk in making the story with little funding and no back-up.

Her unique storytelling was recognised as “original, creative and powerful” because it didn’t show the Sudanese as victims but highlighted the sense of community and connection to the land.

Judges said: “She allowed the story to be told through the protagonists. It takes a really great journalist to be able to pull that off. She found a way to tell a story that is completely unlike traditional ways of telling stories of conflict. It’s a wonderfully original piece.”

Based in Nairobi, Gogineni has worked for the past seven years on life amidst the conflict in East Africa, she accepted the award and said she hoped her film would hold power to those accountable and highlighted the importance to share the conflict to rebuild a healthy and open society.

The Sony Impact Award for Current Affairs was awarded to Deeyah Khan and Darin Prindle for their feature focussing on anti-Muslim propaganda and the far-right violent ideologies for ITV. 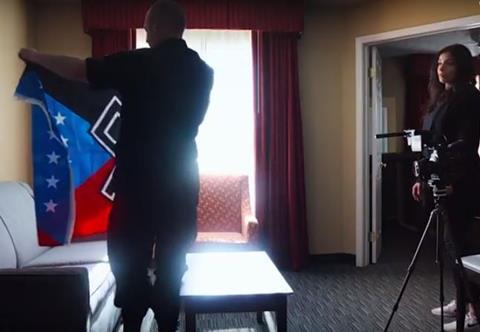 White Right: Meeting the Enemy sees Khan sit face-to-face with fascists and racists where she tried to cultivate a friendship with people who openly despised her and her beliefs in order to understand their motives.

Judges said: “The filmmakers put themselves in an extraordinary situation which challenged both the subject and them. They got under the skin of these characters in a way that no-one else has.”

Khan is of Muslim heritage and is passionate about telling stories of extremes and of third-culture spaces, her collaboration with Prindle saw their focus to tell the stories from the margins of society.

Presenting the Award was Sony Professional Solutions Europe Head of Marketing for Media Solutions Stuart Almond who recognised the power of storytelling and thanked the dedicated freelancers for their extraordinary work showcased on the night.

He said: “We must recognise and honour the outstanding work of freelance journalists whose creativity, bravery and sheer determination play an enormously important role in shaping our perception of world events.”

Konate’s footage includes the work of the rescue mission as well as interviews of the migrants recounting their harrowing journey from the Libyan coast. 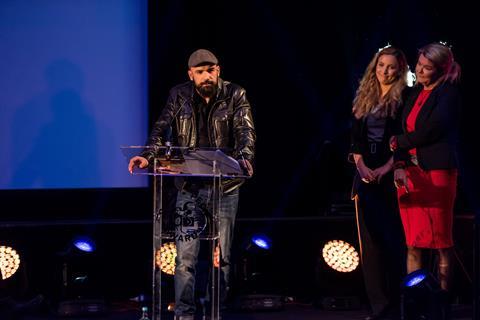 Described by judges as an astonishing piece of journalism, they said: ”Although it is one snapshot in time, his images reveal so much about the situation right now in the Mediterranean Sea.”

”It’s a story that’s been told before but his footage stands out. It’s beautifully shot throughout; the wide-shots from the dingy and rescue boats, the close ups of a mother and her traumatised child. It’s an astonishing piece of journalism.”

Konate is a video journalist with experience covering politics, social movements, conflicts and crisis for major media outlets including Reuters and CNN. 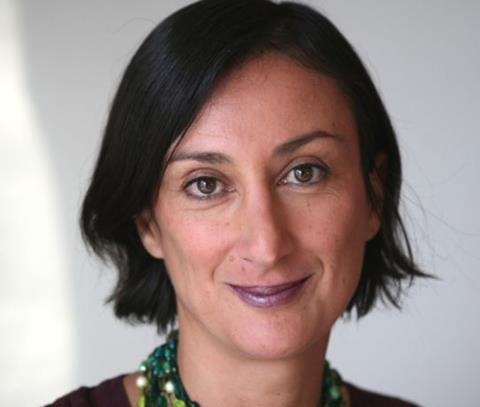 Maltese freelance investigative journalist Daphne Caruana Galizia was awarded posthumously with The Martin Adler Prize. She was killed by a car bomb near her home in Malta last October.

The special award honours a local freelancer who has made a significant contribution to newsgathering, either through a single story or body of work, but who is largely unrecognised by the international news media. Galizia is the first posthumous recipient of the Prize, which was collected by her son Matthew.

The Rory Peck Trust Chair Sarah Ward-Lilley said: “We chose Daphne as the recipient of this year’s Martin Adler Prize in recognition of her outstanding body of work as a freelance journalist reporting alone on Malta’s most important stories, and in acknowledgement of her extraordinary dedication and courage working under the most challenging of circumstances,”

Hosting the ceremony was Sky News Special Correspondent Alex Crawford and BBC Middle East Editor Jeremy Bowen who thanked the freelancers for their courage and excellence in storytelling, covering stories otherwise not reached by broadcasters.

Rory Peck Trust Director Clothilde Redfern took over from Tina Carr in September. Refern thanked Carr for her for 21 years at the Trust  and for transforming the organisation.

She said: “The winners and finalists have shown, freelancers play a crucial role in global newsgathering, accessing stories that can’t be reached and informing our lives through their powerful, eye-witness journalism. The Rory Peck Trust exists to support freelancers so that they can stay safe and continue to report in an increasingly hostile world.”