Darren Childs will step down from his role as chief executive of UKTV after holding the position for eight years, amid suggestions that the broadcaster could be broken up.

Childs will hold the position until 1 July while the UKTV board searches for a successor. Childs has yet to announce his next endeavour.

In a statement, Childs said: “It’s been the greatest honour to work with this fantastically talented group of people, I’m incredibly proud of what this team has created, and the successes they’ve built: growing audiences, working with our producer partners to create a collection of award-winning programmes; and making bold entertainment brands that stand out from the crowd.

“We’ve created a huge amount of value and had a lot of fun. I want to give my sincere thanks and appreciation for the support the team has given me and look forward to continuing to work with our group over the coming months to ensure I pass the baton in a seamless fashion. I wish the company every success for the future.

During Childs tenure, the company has grown its commercial share of viewing by 42%, driven a 66% increase in revenues and nearly tripled its profits.

He also oversaw the catalogue of UKTV Originals that earned a host of award wins and nominations as well as the launch of UKTV Play a direct-to-consumer video on-demand service that quickly became its most successful channel with two million registered users. 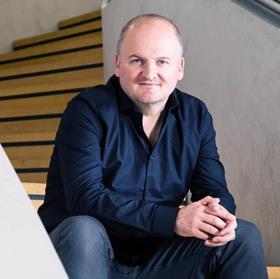 BBC Studios chief executive Tim Davie said: “Darren deserves our thanks for his many achievements in eight years as an excellent CEO of UKTV.

“He will leave UKTV in extremely good health, with a great team at all levels and he will take our very best wishes this summer for his own next move.”

It was set up more than 25 years ago in a joint venture between the BBC and Thames Television to show repeats of pay-TV channels. It has since expanded into free-to-air broadcasting and original programming.

According to a report by The Guardian, in September last year UKTV’s parent companies were in the final stages of agreeing a £1 billion breakup of UKTV in a move to accelerate plans to build a British streaming service to rival Netflix.

As part of the deal, the BBC would pay out Discovery after it has long sought to take full control of UKTV, which made a profit of £90 million last year and paid £54 million to the commercial arm of the BBC.

UKTV Play has a 36% increase in views year-on-year which generated 140 million views in total for 2018 and attracted 1.8 million registered users.

UKTV said that in 2018 it worked with more independent producers than ever before to produce and develop over 120 new shows.

UKTV’s Director of Commissioning Richard Watsham said: “This year our aim is to grow original output even further with a series of network firsts.

“UKTV is increasing investment into originations yet again and in partnership with top talent, both in front of and behind the camera, it’s enabling us to strengthen our catalogue of popular and critically acclaimed shows.”