ABC managing director and editor in chief David Anderson is preparing for two different budget outcomes, with the result of the upcoming Australian federal elections to determine which is used by the public service broadcaster.

He said: “If the Coalition is returned we have an $84 million budget reduction over the next three years and having been through a number of budget reductions to this point, I don’t see how we can avoid staff cuts and disruption to our content. It is inevitable.”

Speaking in his first interview since securing the position last Friday, Anderson said: “Our options are not great, they’re not in keeping with what we are trying to achieve, that is to be independent, innovation and invaluable over the coming years.”

He told Radio National reporter Patricia Karvelas his first priority is to establish a new leadership team and continue to deliver independent and fierce journalism.

Anderson refused to speculate on whether the cuts would come from the front or back end of the organisation, he added: “We have looked across the board at similar scenarios…all options involve staff and services.”

Plan B
While the two budget scenarios are neither ideal for the public broadcasters, Anderson explained the Labor government has promised to pause the indexation.

Anderson said: “If the indexation is reversed that is obviously a lot better for us but we will still be looking to make efficiencies.”

“The indexation is not enough to cover the rising costs and at the ABC and we are always looking for efficiencies.”

Anderson has gone on the record in Parliament to push the case for the ABC to receive more funding and specifically the $84 million indexation is not financially enough to cover the rising costs to the broadcaster. 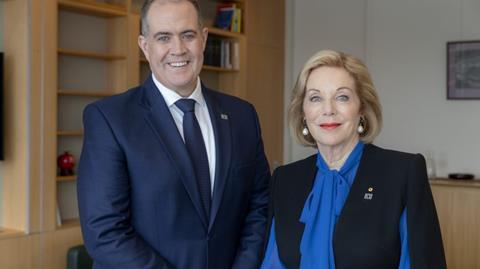 He said: “It’s the size of what we are going to have to do and efficiencies aren’t about not performing.”

A five year funding cycle has been proposed by Anderson, in an attempt to separate the ABC from the three-year political cycle.

According to The Sydney Morning Herald, Anderson sent a letter to all ABC staff yesterday, he promised he would advance the case for funding and attempt to increase investment for its content and technology.

It said: “I give you this commitment: I will be a passionate champion for the ABC.

“I will work with stakeholders, policy makers and the creative sector to find creative responses to the thorny problems that affect our industry: the lack of a local content framework, the dearth of innovation, the hollowing out of regional media.”

Anderson began his career at the ABC in 1989 and has worked his way into senior management, acting for the last seven months as interim managing director succeeding Michelle Guthrie.

In his previous role, Anderson was responsible for the TV networks including ABC TV, ABC Kids, ABC Comedy and ABC ME as well as its catch-up platform iview and the radio music networks.

He told Karvelas he is a passionate champion for the independent and innovative national broadcaster but recognised the ABC needs to do more to look and sound like contemporary Australia and beyond the election that is his immediate priority.

Guthrie was fired halfway through her five-year term last September by the directors after they decided her decisions did not have the broadcaster’s best interests at the forefront.

Anderson worked with Guthrie on its new content strategy role where he said its mission continues to empower teams to deliver objective journalism.

Under Guthrie, the ABC collapsed the tier based strategy and introduced a regional and geographical genre based structure.

Anderson said: “There has been a lot of success to the content reorganisation but there are some areas which have not worked.

Anderson said removing the overlapping of content and uniting teams together under a single editorial manager would be key and links to the budget restrictions.

He concluded the “silver lining” to the recent criticism and management reshuffle is the public support and the importance of a public broadcaster to contribute to a functioning democratic society.