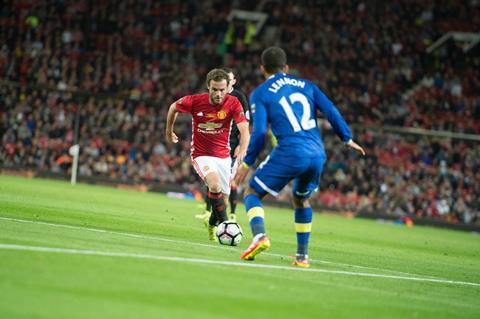 If leading sports remain out of action until August, Sky and BT Sport will lose nearly £1 billion in revenue, according to Enders Analysis who calls for players to take a pay cut in support.

The impact of coronavirus on the sports broadcasting industry is severe with the worst-case scenario forecasting a four-month suspension of all sports coverage including British and foreign, according to Enders’ latest research report.

The report stated: “All subscribers pausing their contract and wholesale clients being allowed to follow suit, Sky would lose £700 million and BT £228 million in revenues.

“But that would be it, as we assume they have not made substantial payments for sporting events to be held after June, and would spend more only with solid guarantees on events actually being held.”

In England, the Premier League has postponed matches until at least 30 April, and it appears increasingly unlikely that the league will resume then as the government’s nationwide lockdown is expected to continue for months.

Broadcasting rights, which is football’s main revenue stream, are paid in advance, but disclosure on timing is limited. The EPL is Europe’s major league most reliant on broadcast licence fees. For the EPL, Sky and BT pay the league twice a year, in July and December, and clubs get their shares in August and February.

According to the report, BT has disclosed that its current contract included a deposit of £27 million at the time it was awarded and then biannual payments of £145 million.

“We would expect Sky’s payments to mirror this, translating to about £530 million due in July. BT’s annual bill for the Champions League—paid to UEFA, which then pays individual clubs in line with results—amounts to £394 million per year, but the schedule is unknown.”

Other revenue streams are expected to suffer also, including matchday attendance and sponsorship revenues.

“Group activities of 25 people involving close physical contact without protection will not plausibly be the first to be allowed when some social life resumes.”

According to the Guardian, Sky has stopped charging commercial clients, which include pubs that carry Sky Sports, and pay-TV subscribers can “pause” their payments.

BT has told customers to call to “discuss their contract or other options”, while some customers on its flexible pay-TV package can elect to drop sport.

The report highlighted: “Assuming a worst-case scenario of a four-month suspension of all sports coverage (British and foreign), with all sports subscribers pausing their contract and wholesale clients being allowed to follow suit, Sky would lose £700m and BT £228m in revenues.”

However, beyond July Sky and BT will start saving money if sport remains off screens as upcoming rights payments would be postponed or cancelled.

Sky and BT are set to pay the Premier League the six-month licence fee for the first half of the 2020-21 season, which amounts to about £530 million in total, in July. BT’s annual bill to UEFA for the Champions League rights is £394 million. 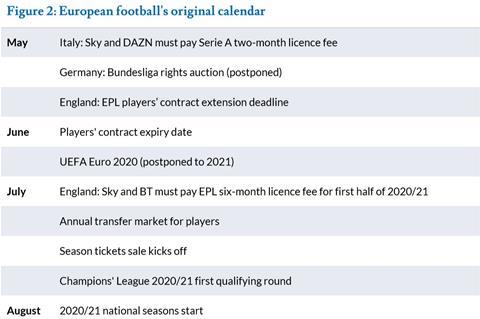 Football’s packed calendar has been stopped due to coronavirus

The report added: “In Italy, the reckoning may come earlier. Reflecting a sector with huge bank overdrafts and low liquidity, the Serie A gets paid by licensees every two months, with the next payment due in May, which Sky and DAZN may ask to be postponed if games have not restarted, triggering immediate financial distress in most clubs.”

It said: “Football’s cost structure is pretty simple: most of the receipts flow into players’ pockets. Enders has suggested that players need to play their part as clubs struggle economically, with wages accounting for 59% of revenues across the Premier League.

“The best solution is collectively negotiated pay cuts, but negotiating pay cuts with players is as difficult as herding cats.”