Blackmagic Design has launched what it claims is “the world’s most advanced digital film camera” with a new Super 35 12K sensor, new fifth generation colour science and improved Raw recording. 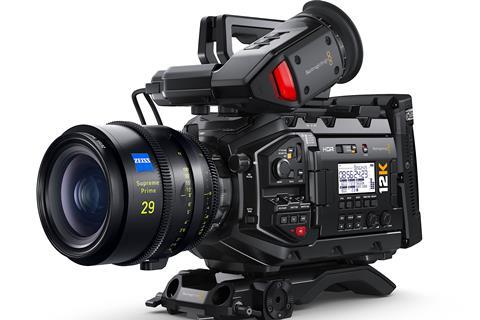 Blackmagic: The new Ursa Mini Pro 12K can even be used for Imax production

The Ursa Mini Pro 12K uses a 12,288x6480-pixel (17:9) Super 35 image sensor, boasting 14 stops of dynamic range and the ability to shoot at up to 60 frames per second in 12K at 80 megapixels per frame. This third generation model supports new Blackmagic Generation 5 Colour Science and higher Blackmagic Raw performance. It will be available this month for $9,995.

The company claims that “oversampling from 12K gives customers the best 8K and 4K images with the subtle skin tones and extraordinary detail of high-end still cameras”. It can also shoot at up to 110fps in 8K (and 4K without cropping) and up to 220fps in 4K with a Super 16 crop. It has a native ISO of 800 and comes with an interchangeable lens mount (for PL, EF and F mount), plus built-in ND filters, dual CFast and UHS-II SD card recorders, and a USB-C expansion port.

Its high resolution, “well beyond traditional motion picture film”, should make it suitable for feature films, episodic television and even immersive, large-format IMAX production, according to Blackmagic. It is also “ideal for working with green screen and VFX, including compositing live action and CGI”. Super sampling at 12K should deliver better colour and resolution at 8K, “but also a smoothness that comes from making aliasing invisible”.

It offers 12-bit Raw workflows for 12K production, using a more efficient “next generation codec” Blackmagic Raw that should allow users to edit on a laptop, “a capability that simply isn’t possible with other codecs”.

Having such high resolution means users can easily reframe shots in post for delivery in 8K or 4K. “It’s like a multi camera shoot with only one camera. And it’s perfect for great looking vertical and square video, too.” Using Blackmagic Raw is promised to mean that users can work in any resolution in post instantly, without rendering, while retaining the full sensor’s colour accuracy.

Constant quality Q0 and Q5 options in Raw and new Q1 and Q3 lock the quality level, allowing compression to adapt, matching the detail of the scene. Constant bitrate encoding options (5:1, 8:1, 12:1 and the new 18:1) are designed to give the best possible images with predictable and consistent file size. Users can record Raw to two cards simultaneously, in 12K or 8K, to either CFast or UHS-II cards, even at high frame rates. Blackmagic Raw stores camera metadata, lens data, white balance, digital slate information and custom LUTs to ensure consistency of image on set and through post.

Shooting Raw in 12K is claimed to preserve “the deepest control of detail, exposure and colour during post. Oversampling means customers get extremely sharp 8K without harsh edges,” while Blackmagic Raw is designed to accelerate 12K for post, making it “as easy to work with as standard HD or Ultra HD files”.

The latest Generation 5 Colour Science features a new film curve designed to make full use of all the colour data from the 12K sensor. This should deliver better colour response for more pleasing skin tones, and better rendering of highly saturated colours such as neon signs and car tail lights in high contrast scenes. In Raw, the colour and dynamic range data from the sensor is preserved via metadata for use in post. It is also compatible with all previously shot Blackmagic Raw files, so that users can take advantage of the new film curve with existing work.

There are three options for recording 12K, which contains almost ten times the resolution of Ultra HD. Besides the dual CFast and UHS-II SD card recorders, a SuperSpeed USB-C expansion port allows recording to fast SATA and NVMe drives (at up to 10Gbps). With ‘Record Raw on 2 Cards’ turned on, Ursa Mini Pro 12K can record simultaneously across two cards up to 900MBps (for CFast cards), or 500MBps to two UHS-II SD cards. The USB-C port can record to USB-C flash storage up to 900MBps.

There is also a new Blackmagic Ursa Mini Recorder, which can record 12-bit Blackmagic Raw files onto fast 2.5in SSDs, including the latest U.2 NVMe Enterprise SSDs with data transfer speeds of up to 900MBps, which offers longer recording times for full resolution 4K, 8K and 12K 12-bit Raw files in the highest quality Q0 encoding.