Disney+ predicted to take on Netflix and Amazon 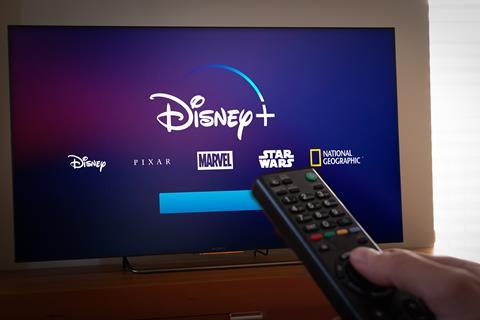 The Disney+ streaming service is expected to add 19.2 million subscribers in Western Europe by 2024, driving the next OTT boom, according to Digital TV Research.

It is forecasted there will be 131.2 million gross streaming video-on-demand (SVoD) users in Western Europe by 2024 which is double the 65.19 million subscribers the firm predicted at the end of 2018.

Around 13 million subscribers will be added to the new direct-to-consumer streaming service in 2019 alone, according to Digital TV Research, with a similar number of subscriber additions to follow in 2020.

He said: “Disney+ will make a strong and immediate impact, given its extensive brand recognition and impressive content line-up. We forecast 19.18 million paying subscribers by 2024, fast approaching Amazon Prime Video.”

The forthcoming streaming service is expected to hit the market on 12 November and will significantly enhance the OTT market, however analysts do not expect Disney to surpass the popularity and subscriber base of Netflix by 2024.

Race to 1bn SVoD subscribers
The global number of gross SVoD subscriptions will increase by 439 million between 2018 and 2024 to 947 million which is a total of 86%.

The global number of gross SVoD subscriptions will increase by 86% between 2018 and 2024, from 439 million to 947 million users. According to Digital TV Research the total will climb by 119 million in 2019 alone.

Murray said: “China overtook the US in 2018 to become the gross SVoD subscription leader. These two countries will continue to dominate the world stage.

“China and the US will together account for 59% of the global total by 2024. However, this proportion is down from 63% in 2018; indicating that other countries are growing faster.”

It is expected 74.2% of Western European TV households will have a SVoD subscription, double from 37.3% at the end of 2018, the report added, however, Germany, Italy, France and Spain are predicted to be below the regional average by 2024.

Outside of the US, the launch of Disney+ is anticipated to cause a surge SVoD subscribers. But Digital TV Research said Netflix will remain the largest pan regional SVoD platform by some distance with 54.86 million paying subscribers by 2024.

Disney+ will own the rights to popular franchises include Marvel and Star Wars and has assumed full operational control of US streaming service Hulu, in a “put/call” agreement with Comcast.

Last month Disney confirmed the sale of its sports and cable TV assets to Sinclair Broadcast Group in a deal valued at $10.6 billion.

The Walt Disney Company was forced to redistribute its ownership of the sports network by US Federal regulators after completing its $71.6 billion acquisition of 21st Century Fox in March this year.

IBC365 reported: Regulators said Disney’s foot hold in the televised sports market was already significant because of its ownership of ESPN.