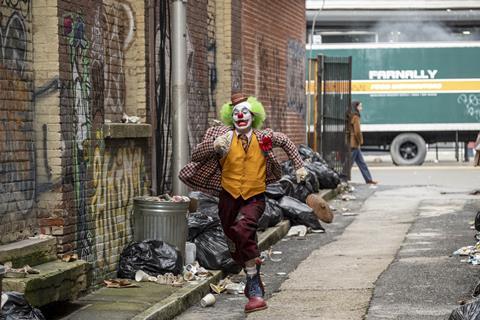 Joker: One of the most pirated fils according to TorrentFreak

Overall access to pirated content in Europe has dropped more than 15% according to a new report by the European Union Intellectual Property Office.

Pirated music decreased by 19.2% and the consumption of pirated television content dropped 7.7%.

The report highlighted the average internet user in Europe accessed online pirated content 9.7 times per month in the first nine months of 2018, using both fixed and mobile devices.

The EUIPO report was accumulated using data of more than 70 billion internet connections across 21 months between January 2017 and September 2018.

EUIPO executive director Christian Archambeau said: “Copyright-intensive industries, including film, television and music, support over 11 million jobs in the EU, and piracy, with the associated loss of revenue it brings, represents a direct threat to those industries.

“Despite the downturn in pirated consumption shown in our study, there is still much work to do to tackle this problem, and we hope these findings will help decision-makers as they develop policies and solutions.”

In an additional study published by the EU, the internet protocol television (IPTV) unauthorised streaming from approximately 13.7 million EU citizen cost on average €941.7 million per year.

It found that the likely cause of this is through one-off payments, purchasing illegal set-top boxes, or via long-term subscriptions sold by unauthorised retailers.

The average single user in the EU spends €5.74 around per month on unauthorised IPTV, according to the report.

IBC365 investigated what OTTs are doing to fight back against online piracy, examining if online piracy of content can force OTT platforms to innovate beyond creating a seamless user experience?