Facebook and Google made to pay ad-revenue in Australia 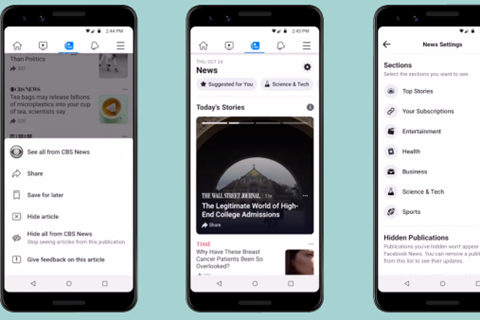 Technology giants Google and Facebook will be required to pay Australian media outlets for news stories published under a new mandatory code of conduct on digital platforms.

Technology giants Google and Facebook will be required to pay Australian media outlets for news stories published under a new mandatory code of conduct on digital platforms.

The regulations will come into effect from July, the Scott Morrison government announced today, with the Australian Competition and Consumer Commission yet to determine how the government’s proposal will work specifically.

According to a report by The Sydney Morning Herald, it remains unclear who will be the beneficiaries and if the payments will be enough to help offset the loss of advertising revenue intensified by the coronavirus crisis.

It follows a decision from the Australian government to offer local broadcasters and media outlets with extra financial support during the crisis.

If successful, Australia will be the first country in the world to force technology companies to pay for locally generated content.

The development of a code of conduct is part of the Australian Government’s response to its Digital Platforms Inquiry report by anti-trust regulator the Australian Competition and Consumer Commission.

The ACCC identified that Facebook and Google have each become “unavoidable trading partners for Australian news media businesses in reaching audiences online, resulting in an imbalance in bargaining power.”

Facebook Australia and New Zealand managing director Will Easton said: “Covid-19 has impacted every business and industry across the country, including publishers, which is why we announced a new global investment to support news organisations at a time when advertising revenue is declining.”

The Australian news media, which is worth $5.7 billion (AUS$9 billion) a year, is dominated by Rupert Murdoch’s News Corp, Nine and Seven West Media, but Google and Facebook account for 76% of digital advertising revenue generated in the country.

The new code being drawn up by the competition watchdog, will include enforcement, penalties and ways to sort out arguments between the global platforms and local media companies.

It will include sharing of revenue generated from news, ranking and display of local news content on Facebook and Google’s sites as well as data sharing, according to a report by Business Insider Australia.

News Corp Australia chairman Michael Miller said: “For two decades, Google and Facebook have built trillion dollar businesses by using other people’s content and refusing to pay for it. Their massive failure to recognise and remunerate creators and copyright owners has put at risk the original reporting that keeps communities informed.

“The decisive move by the Australian Government to go directly to a mandatory code of conduct between the international tech giants and Australian news media companies is a vital step that can help secure the future of Australian journalism.”

Earlier this month, France’s competition watchdog ordered Google to negotiate with news publishers over the use of news snippets on its websites.