Behind the Scenes: Babylon

Babylon is both love letter and hate mail to the birth of the movies and the studio system that horrifically bullied its employees while manufacturing dreams for the masses, writes Adrian Pennington. 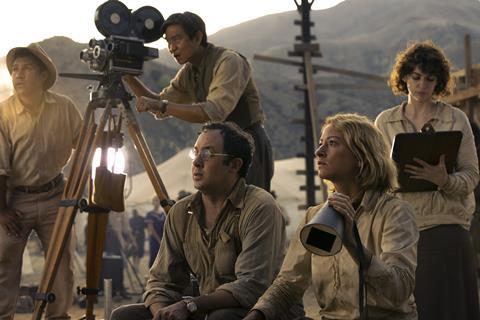 “Rather than be polite and mediative Damien really wanted to come out of the gate and be explosive and loud and in your face and reckless,” said Tom Cross ACE, the movie’s editor. “That was his directive to all the departments and certainly something he talked to me about. He talked about The Wolf of Wall Street and how he wanted the opening to feel frantic, frenetic. For there to be a coked-up energy. With this party to end all parties we’re setting the road map for rest of the movie.”

Babylon spans the rise of Hollywood as a wild west in the 1920s to the glamour and fakery of its mid-thirties heyday and mixes fictional characters with real life figures like studio boss Irving Thalberg. It pays homage to grandiose epics like DW Griffith’s silent Intolerance, which featured a sequence about ancient Babylon (filmed on a Sunset Boulevard lot) while mining the pages of cult filmmaker Kenneth Anger’s 1959 book ‘Hollywood Babylon’ for scandal and intrigue about the stars, their bosses and the criminal underworld.

“Damien wanted it to be a big, ensemble movie in the tradition of Nashville where you really feel a tapestry of different characters,” said Cross, who cut Chazelle’s Whiplash, La La Land and First Man, winning a best editing Oscar for the former in 2015. “I also knew that to have all these characters arcs that all interconnect it would require a lot of screen real estate.”

Babylon is three hours long but the first third at least barrels along like an insane screwball comedy.

“Usually when we sit down to edit we start at the end,” Cross said. “With Whiplash we started editing the ‘Caravan’ jazz number first. With La La Land it was the dream fantasy epilogue and with First Man it was the Apollo 11 mission.

“Babylon was different. Because of the way Damien wrote it he knew that where we’d wind up was a very different place to where we start. So, we decided to start editing at the beginning. It’s where we could establish our style which was going to carry us through a third of the movie. That style was going to be fast, percussive and something that you would have to keep up with.”

Behind the Scenes: Babylon – Freeform flourishes

Like Chazelle’s previous work, Babylon is powered by music and a score by Justin Hurwitz. The director, who created Netflix Paris-set jazz drama The Eddy, writes a prominent part for a Duke Ellington-inspired trumpeter (played by Jovan Adepo) but the whole movie fizzes with freeform flourishes. This is all meticulously planned of course.

“He draws his own storyboards which consist of stick figures, very raw, but you really feel the essence of the shot,” Cross explained. “In some cases, he will take these stick figures and create rough animatics with a temp score to map out how he wants to shoot the scene and as a rough guide for me to start.

Chazelle and Hurwitz outlined the melodies and musical tempo of the picture in advance of the shoot enabling Cross to cut with rough digital demos of the score.

“We knew that sound and picture would be braided together. The music gave me a bed to glue all these chaotic elements together and some percussive edges which I could bounce the picture off.”

Most editors, Cross included, will cut to temporary music or without any music at all until they’ve assembled scenes with a satisfactory pictorial rhythm. For Babylon, since they already had music custom made, the process was more symbiotic. 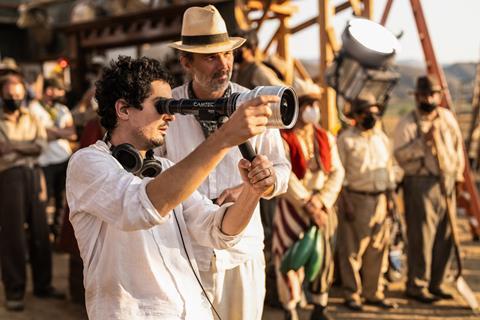 “Justin was in the room next to my cutting room so I’d send him picture cuts then he’d refine the music edits and recompose and gave that back to me. I’d lay it up to picture and further adjust. This a very specific type of rinse and repeat cycle that I don’t do on any other movie. What it means is we work more closely to Justin’s music to guide the picture cutting.”

The bawdy nature of the first act gives way to a more contemplative pace (though not without a wild snake bite scene which recalls Uma Thurman’s trippy experience in Pulp Fiction). The transition in the story is marked by the arrival of sound to the movies and a scene depicting a seasoned silent film crew and silent star Nellie La Roi (Margot Robbie) trying to get to grips with recording voice on set.

Behind the Scenes: Babylon – Considerable challenges

For Cross this was among the most challenging sequences. He explained: “Not long before that scene we’ve staged a battle which has shots of axes and swords and blood hitting faces. It’s very stylized and loud and part of a language we’ve established for the film up to this point. All of a sudden you are resetting for the audience. It is quiet. We’re trying to create a scene with a certain amount of tension and suspense but instead of being built on something overt it is built on minutia.” 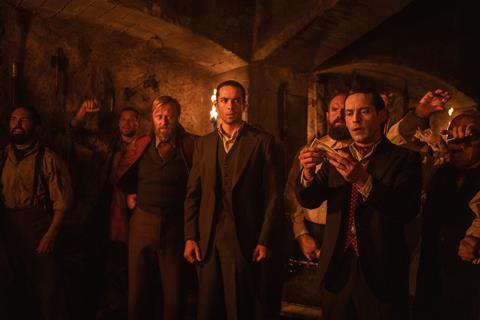 He pointed out that the challenge was similar to that in Whiplash where the task was how do you make band practice feel like a war movie? “Here, it is how do you make Nellie’s first dialogue a scene that hinges on a pin drop? How do you make that feel life and death? Damien’s answer to that was to revel in repetition.”

Chazelle wanted to set up a visual preamble of elements that go into every take—such as insert shots of the red recording light, a bell ringing, the slate boy with clapper board, a close up of the director using her hand to cue the action, Nellie’s feet on stage and a door opening.

“With all these little details pieced together we set up a rhythm. The audience start feeling uncomfortable because their expectations are being played around with. They think the take is going to be ruined but they don’t know when or how. So, every time we cut back to this preamble of the slate boy and bell ringing I cut it little bit faster creating the shorthand for the audience whilst also building momentum and upping the ante. You’re pulling a rubber band back and the audience is waiting for when it’s going to snap back. By speeding it up each time the hope is that you are subconsciously speeding up the audience’s heartbeat and having that synch with the rhythm of the movie.”

He added: “Our intention was to make the audience feel like a steady mechanical march towards dorm.”

Behind the Scenes: Babylon – A litany of references

As might be expected cinematic references abound, some obvious and others more subtle. Singing in the Rain, a movie that Babylon mirrors, is a refrain throughout the film. Musical satire It’s Always Fair Weather from 1955 is another. Cross picked out the action on the staged battlefield sequence that “feels like Apocalypse Now and in the same shot we move into Monty Python and Holy Grail.”

Another Python character, Mr Creosote, might spring to mind elsewhere, though it’s not clear if this was intentional. The gross out vomit sequence almost tips the picture over the edge.

“We talked a lot about calibrating the vomit and the other extreme elements and we usually aired on the side of more is more,” Cross says. “We really tried to push it. If in doubt we decided to go for it.”

The coda to the film is a sugar rush of cinematic hits from The Wizard of Oz and 2001: A Space Odyssey to Avatar showcasing the alchemy and the art that the dream factory has produced amid all of the dross and the behind the scenes horror.

“It was very important that the audience got lost in this sequence with wonder,” Cross said. “We didn’t want there to be clear motive for the choices of film clips or for the audience to instantly understand what was happening in each movement. We wanted it to be ambiguous. To be a visually spectacular experience, yes, but we designed it to be feral.”

Behind the Scenes: Babylon – Character depth

The length of the film might seem to deflate the energy that is built up over the course of its first third but Cross said he’s proud of the breadth that is travelled by the characters. “Damien wanted to play it very broad and very light at the beginning and to have enough runway to take the story down different roads where you don’t expect it to go.”

For example, we first meet major movie star Jack Conrad (Brad Pitt), drunk and pontificating about cinema, arguing that Hollywood has to innovate because, the character says, “in Europe they have Bauhaus while here we’re making costume pics”. But when innovation comes, mostly in the form of audience’s expectation for something new and different, it is Conrad who is faded out. His fall is contrasted with the rise of fixer Manny Torres (Diego Calva) from elephant wrangler to studio chief.

“Conrad describes the movies to Manny as the most magical place in the world and we can see Manny is moved by it,” said Cross. “But there is a naivety about Conrad in that these innovations are really the seed of his own downfall. As the story unfolds we have a different understanding of this person. The reason why we wanted this film to be so big is to be able to hold all these tonal changes and to move from lightness into dark.” Much like going to the movies itself.