Behind the Scenes: Intergalactic

The VFX team behind Sky Original science-fiction Intergalactic drew on nail varnish, quantum mechanics and the odd ‘space chick’ for the design of key sequences. 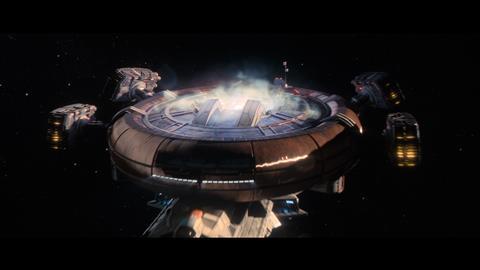 Written by showrunner Julie Gearey (Prisoners’ Wives, Secret Diary of a Call Girl), the drama begins when galactic cop Ash Harper (Savannah Steyn) is wrongly convicted of a crime and exiled to a distant prison colony.

The show’s opening sequence introduces the decayed underbelly of a drowned and post-apocalyptic London and was a key conversation between VFX supervisor Jean-Claude Deguara and the producers.

“The first concept art I saw had a real sense of a washed out, dried up London contrasted with the vastness of shiny new London (the ‘Commonworld’) built on top,” Deguara says. “The original storyboard barely changed from first viewing to pre-viz to final shot, which is quite rare. We all saw eye to eye on the aesthetic ambition.”

London landmarks in the opening sequence – Westminster, St Paul’s, Tower Bridge – had to be portrayed with a level of dilapidation that reflected the century of time that had passed as well as the effects of flooding. Shafts of volumetric light, clouds of dust, fog and steam were added along with low-level vegetation and falling debris.

“We began with those familiar landmarks and worked out a 6-7-mile radius from that to focus on,” explains Sam Lucas, head of modelling. “We referenced scans of London we had in our library and began to work on modelling specific destroyed buildings before passing to layout.”

The area where the space craft lands to chase a suspect in the opening minutes was filmed on a cobbled street in Manchester, set decorated for decay. The bulk of the show, including interiors, was filmed at Space Studios’ 30,000sqft 06 stage in Manchester.

The cityscape of futuristic buildings which towers above derelict London features giant skyscrapers, floating platforms, roads and monorails. These are CG enhancements to the main location shoot at the City of Arts and Sciences complex in Valencia.

Director Kieron Hawkes and production designer Mark Geraghty came up with the idea of using the giant swimming pools that surround the complex as portals for looking down into the depths of old London.

Ash’s Police Pod, which we see swooping through both parts of the city, went through a lot of changes to the practical prop (a full-size replica shot on a gimbal).

“Kieron and I planned out the moves of the craft and shot practicals against green screen as well as full CG versions,” Deguara says. “The trick here was matching the light reflections between practical and CG shots for the cockpit.”

To research how to convey the frequent space travel sequences, Deguara met up with The Sky at Night space scientist Dr Maggie Aderin-Pocock MBE. She gave him and executive producer Iona Vrolyk a two-hour tutorial about hyperspace travel and the folding of space time (known as the Alcubierre drive) using a small glass bottle of nail varnish.

“She kept it in very simple terms for me to understand and used this make-up vial to illustrate how the universe warps around a bubble and that the bubble protects everything inside of it,” Deguara relates.

“To visualise a giant bubble on screen might look a bit boring but just from talking to Maggie we went down that route and made the scale of it humungous, so in our conception time and space travel resembles a huge ocean rippling when anything interacts with it.”

This idea was translated into CG and used in various ways including projection onto a screen as a backdrop to filming interiors from spacecraft cockpits.

This virtual production set up may not be quite of the sophistication of ILM’s The Mandalorian but it served the story just as well.

“The main intent was to capture in-camera, but where the bigger visual effects were needed we could drop down green screen for more backgrounds and shoot that out of focus,” Deguara says.

The scene that everyone is most excited about is one in which a character on a space walk drowns in her space helmet as a result of a leak from the suit’s water coolant.

“What I liked about this was that we’re really using VFX to tell the drama,” says Matias Derkacz, head of 2D, in-house VFX supervisor. “You see CG water on many shows but it never interacts with the actor to tell the story. In order to get across the dire consequences of the character’s situation our work had to feel realistic.” 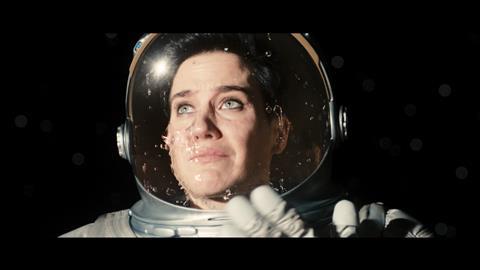 The clues came from video taken aboard the ISS in which Canadian astronaut Chris Hadfield performed a simple science experiment to show high school students the effect of gravity on water. In the video he wrings out a soaking rag and the water is shown to cling with surface tension around the rag and to his hands like a gel.

“You see CG water on many shows but it never interacts with the actor to tell the story,” Matias Derkacz, head of 2D, in-house VFX supervisor

“Part of the challenge was to create water bubbles inside her helmet while ensuring that the water behaved believably,” says Deguara. “NASA’s footage shows water behaving as if it is ‘sticky’ in space. We all agreed that that is what we should aim for.”

Actress Imogen Daines’ performance was filmed in a blacked out set lit only by just enough red LEDs for the Sony Venice camera to see her expressions. Her performance was filmed with and without a helmet visor since it was important for VFX to have an unobstructed view of her face. Derkacz used the FLIP Solver function in Houdini to simulate the fluid.

“We had to adapt the software so that the fluid dynamically interacted with her mouth movements,” he explains. “As she tries to release water from her helmet we are using her behaviour to drive the water effect.”

Episode 4 features alien creatures best described as space chicks. This was a script-led concept designed by Milk. “They needed to be a bit cute, a little bit alien and we went for a little bit of a dinosaur feel,” says Dimitris Lekanis, head of FX. “Basically, we wanted them to feel grounded in reality and believable, but with blue fur.”

“About a week after we were told to leave the office we had 150 staff remotely from home and logging into dailies,” Neil Roche, head of 3D

Houdini and Maya were the main software packages used by Milk to integrate all the effects, including for the tentacle-like dreadlocks of one of the characters. They used Maya for modelling, tracking, animation and lighting and rendered using Arnold. Houdini was used for all FX simulations. Yeti, a third-party plug-in, offers additional hair and grooming tools particularly for the space chicks. Ziva Dynamics software was used for skin and muscle simulations and Zbrush for sculpting and displacement. Textures were painted in Mari and Adobe Substance Painter and modelling was done in Maya and Zbrush.

The show was shot by DPs Richard Mott, Gary Shaw and Peter Robertson on Sony Venice in 4K for a UHD delivery.

Arguably the biggest challenge was that the entire project has to be remotely produced during the 2020 lockdowns.

“About a week after we were told to leave the office we had 150 staff remotely from home and logging into dailies,” says Neil Roche, head of 3D.

“This was a big production team but everyone across all departments just got down to it,” says Deguara who was had back-to-back virtual meetings every day for six months. “You can do most of the processes remotely but you do reach a point where you have to look at the images in high resolution on a proper monitor.”

Adds Derkacz: “You get rid of a load of inefficiencies working from home but the work is so collaborative that if someone is stuck it’s easier to walk over to another desk and get an opinion than trying to get them on the phone.”

Read more Behind the scenes: WandaVision