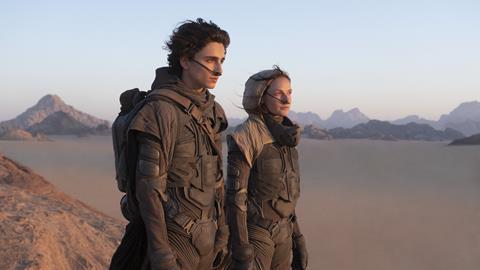 Dune: Behind the scenes with cinematographer Grieg Fraser

“Fear is the mind-killer,” says Timothée Chalamet’s Paul Atreides in Dune. The hero must use his mind to overcome his fear. It’s a central theme of Frank Herbert’s 1965 novel and one that also resonated with DP Grieg Fraser, ACS ASC, who is taking on the hallowed science fiction tome with director Denis Villeneuve (Blade Runner 2049).

“Fear is the reason I get up in the morning,” Fraser tells IBC365. “If I’m a little bit terrified or scared I find that so rewarding. I embraced that.” 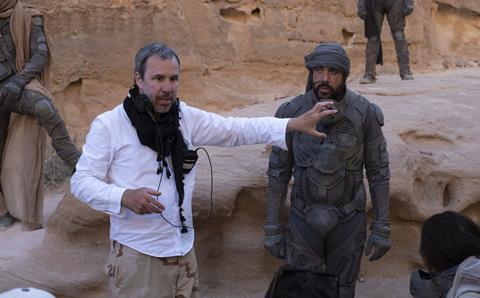 It’s not Fraser’s first rodeo. The Melbourne-born cinematographer landed an Oscar nomination for India-set drama Lion in 2016 and lensed Star Wars saga Rogue One for director Gareth Edwards. That led to a collaboration with director Jon Favreau for Disney on developing the look and the techniques to shoot The Mandalorian for which he picked up an Emmy.

“You know there is a history, a fanbase and a set of expectations around Dune,” Fraser says. “So yes, there was a trepidation about doing this, but I find that stepping up to a high bar makes me perform better. To that extent, feeling fear is actually helpful.”

“Fear is the reason I get up in the morning. If I’m a little bit terrified or scared I find that so rewarding. I embraced that,” Grieg Fraser, DP

The 1965 novel is filled with myth making on the scale of The Lord of the Rings. Like Tolkien’s epic it’s about the battle for power over the empire among warring clans and divided families. It’s a coming-of-age story. It’s a political allegory set thousands of years in the future. It has a strong environmental message about the inhospitable desert planet of Arrakis and the preservation of scarce resources. These ideas and more make the book malleable to interpretation and also famously tricky to conceive on screen.

Villeneuve’s treatment of Herbert’s epic harks back to the source material. Watching David Lynch’s 1984 version was not on the cards.

“We’re making a film based on the book,” Fraser says. “We didn’t have playlists of films, though we did watch a couple of films for ideas to avoid. Denis and I traded ideas for reference about how the world should feel.”

“I kept getting blown away by what Patrice and his artists were working on. It wasn’t just pictures of the location or of the sets but also the lighting. I was more inspired by the lighting in their artwork than any other visual reference I found.”

Likewise, he credits VFX Supervisor Paul Lambert, of Dneg, for an affinity with lighting. “He understands that if the light is wrong the VFX will look wrong, therefore our screens aren’t blue or green but sand coloured or the colour of the environment. When we build a set he wants to put a top on it otherwise the light won’t have the right level of bounce. Normally in VFX meetings I feel the bad guy because I’m suggesting these things. With Paul, I didn’t have to.”

This was Fraser’s first time working with Villeneuve although they’d met before at various functions. One of the first things they did in prep was work out the film’s visual language.

“We did a test in the California desert near the Salton Sea, which is very similar looking to Abu Dhabi in parts [one of Dune’s principal locations] and shot with IMAX film cameras, 35mm spherical and anamorphic, digital spherical and anamorphic. The reason I like doing that is that I love listening to a director’s reaction. While sitting next to a director in a screening you can pick up these signals by watching them react instinctively to what they’re seeing.”

That’s how they decided on a camera package based on Arri Alexa LF IMAX (and Mini LF IMAX) with Panavision H-Series and Ultra Vista anamorphics Fraser had built with Panavision for The Mandalorian.

“Denis had this idea very early on to frame 4:3, which is not a classic cinemascope ratio. It’s one that instantly has TV connotations. But what we did was embraced that format and that’s where IMAX excels [the IMAX ratio is 1.43: 1. This ratio is a storytelling device on Paul’s journey. His mind opens as he goes throughout the movie partially because of the spice and also because of the environment he is in. We used that top and bottom opening up idea in IMAX to express Paul’s journey.”

The filmmakers had the luxury of being able to shoot film but deliberately went digital. “35mm or IMAX film felt a bit nostalgic in this environment. We wanted a clarity to the vision and that’s why digital was the best choice.”

Nonetheless, the digital negative was scanned out to film and rescanned back to digital at FotoKem, a process that Fraser believes leant the film “a certain analogue quality, a real subtle filmic mystery to it, which we couldn’t have repeated had we shot film or digital by itself”.

FotoKem also co-devised the LUT by combining highlights from a skip bleach bypass and the shadows from another LUT supplied by Fraser.

This is big budget filming on an old-school scale complete with location shoots in Jordan’s Wadi Rum rocky valleys, in Norway and on giant sets at Origo Studios, Budapest (also where Blade Runner 2049 was shot).

Given Fraser’s expertise with virtual sets the film could have all been shot on an LED ringed soundstage – and Fraser says the second film, currently in preproduction, may go down this route.

“Patrice and Denis had their minds set on real locations – real dusk, dawn, real sets as much as we can. Remember I was still filming The Mandalorian as I was prepping Dune. I developed the Mandalorian technology for S1 and departed as per my contract after shooting three episodes [Barry Baz Idoine shot the rest] straight to prepping Dune. The reality was that at that time the tech was still in its infancy. It was just ready for primetime but it wasn’t widely available. Now we might make a different decision.”

He continues: “When I think about volume work it’s not all or nothing. Using the volume is most effective when it’s used for the very best things and you use the real world for other scenarios. For the next Dune who knows maybe if we can mix and match shooting volume with real world scenarios, the whole system becomes even more powerful.

“We could literally be shooting in a sandstorm in Abu Dhabi and have our characters rushing for cover inside of a cave [shot in a volume] in the next scene. Ideally, the audience doesn’t notice there’s any difference in the two shooting environments.”

“When I think about volume work it’s not all or nothing. Using the volume is most effective when it’s used for the very best things and you use the real world for other scenarios,” Grieg Fraser, DP

Editor Joe Walker, ACE talks of the benefits of location work to the actor’s performance.

“Even the dryness of the desert air the actors were breathing helped the authenticity of their performance,” Walker says. “Yet the sets in Hungary were vast. What Patrice got right was the weight of the oppression of the palace structures. You feel the weight of stone above you and Dune is if nothing if not a fantastic piece about mankind’s place in the environment.”

For his part, Fraser says his favourite scene depicts Paul’s first experience on the sand on Arrakis. “He arrives on a mission with his father and crew and when he steps out it’s him experiencing that sand for the first time. It’s such a simple idea but feeling this tactility for me was telling of his character. It foreshadows Paul’s connection to this land.” 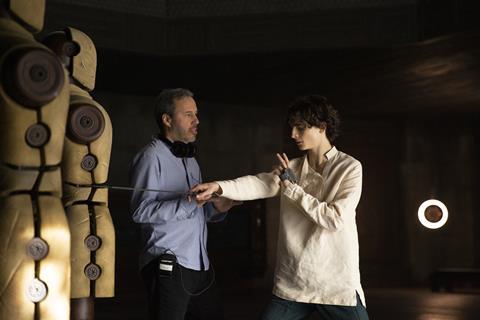 Of the director, Fraser says Villeneuve “doesn’t play those Hollywood games but he is very good at collaborating with the studio. He understands that no matter how big the explosions and set pieces are if you don’t have the story straight the audience will walk out feeling empty.

“He also has this boyish desire to blow stuff up – which is something I share. But it’s everything in moderation. On Dune we shot intense character drama for a week then we’re shooting action scenes with ornithopters and Carryalls [a type of spacecraft] and wind machines.”

Since filming Dune, Fraser has completed The Batman starring Robert Pattinson, some of which was shot in Liverpool in 2020. He says he enjoyed the city and spent a week there filming among places such as the iconic Royal Liver Building, although he was quarantined to a hotel with crew.

Despite a growing reputation for handling franchise properties, Fraser says: “You may not find similarity in the films I’ve chosen to do,” he says. “I made Zero Dark Thirty back-to-back with Foxcatcher. They have entirely different ideas, narratives and aesthetics. I just like working as hard as I can to keep changing it up.”