Broadcast industry must embrace the metaverse

The hype around the metaverse is fully justified, the IBC Conference heard yesterday.

During Step into the Metaverse, Lewis Smithingham, Senior Vice President of Innovation & Creative Solutions at Media.Monks, said we are at the ‘primordial stage’ of the metaverse. There are huge expectations for the immersive and interactive technology, and this has raised the ‘hackles’ of many people who think the metaverse is overhyped. 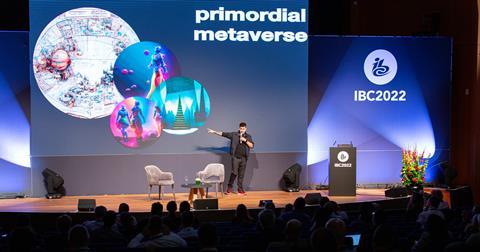 Smithingham: ‘Every aspect of our lives will be affected by virtualisation’

The reality is that, “we are leaning into massive, transformative change”, said Smithingham, who explained that younger audiences in particular are demanding more immersive and more interactive content experiences.

He told IBC delegates that there is a lot of money to be made by the media technology industry if they can adapt to the changes ushered in by the metaverse. “We are not all horse-drawn carriage drivers in 1926.” Broadcasters, he said, know how to tell stories. “We have to pivot into this… If you are not in this space, you are going to get left behind.”

He said there was a widespread perception that the metaverse is based around VR headsets, but it is much more than this. Virtualisation, he said, is the future. “Every aspect of our lives will be affected by virtualisation.”

The metaverse – or virtualisation – will be adopted because it has finance value, he said, saying that $120 billion in investment has flowed into the metaverse so far in 2022. Brands like Nike and Gucci have made millions of dollars from NFT sales, while rapper Travis Scott’s 2020 concert inside video game Fortnite grossed $20 million.

The metaverse also has cultural value. It is a place that brands need to be, because if they are not then audiences will wonder why they are not there, he said. Viewers are now expecting virtualisation and for brands and shows to create virtual parallels.

We have to be more immersive, interactive and inclusive, he added. “The bottom line of this is… if it is not interactive, it is broken.”