Fabrice Mollier: Smartphones, IPTV and VR are opening up new opportunities for advertisers

TF1 may not dominate the French TV industry as it once did, but that isn’t stopping it adopting innovative new ways of advertising, and the approach seems to be working.

For most of his career Fabrice Mollier has been at the heart of France’s largest private TV group’s marketing drive. The path to his current role as President of TF1 Distribution began back in 1994, when he joined TF1 in the home shopping sector.

His personal milestones include being CEO of TF1 Games from 2002 to 2006, then from 2006 onwards marketing and research director of TF1, before becoming chairman of the group’s new thematic channels, including HD1, which he launched in 2012. Prior to his role as President, he was Deputy General Manager of Marketing and Strategy Innovation for TF1 Publicité.

“The future belongs to those who will provide advertisers with engagement, not just impressions”

Mollier admits that the days when TF1 dominated the French TV industry are gone, but he thinks that the opportunities to market his company’s brand are also greater than ever before.

“The way people watch TV has totally changed: they can access content anywhere, anytime and on multiple devices,” he says. “There are numerous ways of reaching them. An important step is the improved quality of smartphone networks. With 5G, you can access premium quality content, which is a big plus for us and our advertisers.”

As he mentioned during the IBC2016 Conference session, ‘New Developments in TV and Video Advertising Technology’, in a country with 60 million smartphones, the ways of reshaping advertising content are limitless.

“You can start a campaign on TV and continue it on other screens, in shorter or longer form, or in a game format on our website MYTF1, you name it,” he says.

Mollier claims that TF1 has always been at the forefront when it comes to adopting innovative ways of marketing. “We were one of the first to use programmatic advertising in France, with a two pronged approach,” he explains.

“For banner advertising, we partnered with a number of companies, press groups for instance, and pooled our unsold ads.

“We chose a different path for video advertising because we were reticent to pool our content with other companies’ and cheapen our image, so to speak. So we created our own SSP [supply side platform], called One Exchange, which we are the first in France to have launched on IPTV.

”We initially commercialised it two years ago, on PCs, tablets and smartphones.” 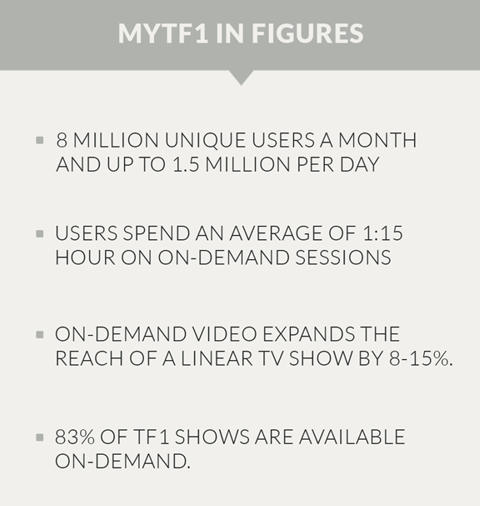 The aim is to reach the 20 million French individuals who watch catch-up TV on an IPTV set-top box. According to Mollier, 300 of the group’s top advertisers now use the IPTV tool, which was launched last year.

And what about metadata? He admits that a universal audience measurement tool, which could be used in a standardised way from screen to screen, does not exist yet, but TF1 has been working on its own way of assessing data. In order to better target and provide efficiency metrics to its customers, it launched ‘One Data’ last year.

In addition to the TF1 audience figures provided by Médiametrie, the group uses a consumer panel built by Kantar Worldpanel covering 20,000 homes, where people scan the produce they buy. This enables TF1 to track people’s real purchases according to the programmes they watch.

“We ran a trial with Narta deodorant and the results were very conclusive: sales increased by 6 per cent,” he concludes.

Another technology he is clearly enthusiastic about is virtual reality and the possibilities it opens up for advertisers.

“It’s an extraordinary new tool which can really boost people’s level of emotion,” he says. “We are studying ways of getting our audience more involved with programmes like The Voice, for example. The future belongs to those who will provide advertisers with engagement, not just impressions.” 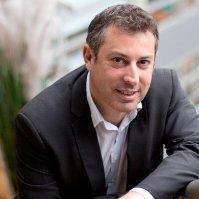 After working 2 years in Spain as a Consultant, he joined the TF1 Group in 1994, in the home-shopping sector, where he successively served as international Development Manager, Home-shopping channel director and Research and Development Director.

In 2006, he became Marketing and Research Director of TF1, focusing on ratings, market studies and new formats evaluation, and channel positioning.

Between 2011 and 2013, Fabrice was named Chairman of Thematic Channels (series and documentary) and launched the new DTT channel HD1 in 2012.

Fabrice joined TF1 Publicité as Deputy General Manager Marketing-Strategy-Innovation in December 2013. He launched the “One Data” platform in 2015 to use Data to enhance targeting and campaign efficiency, for TV and Digital. He is member of the EGTA board.