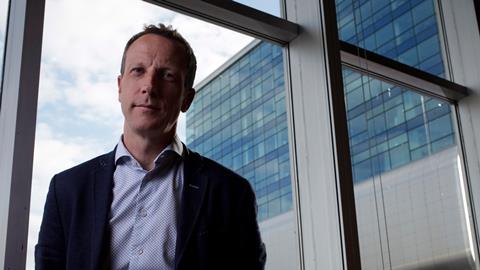 Richard Halton is responsible for developing and launching YouView as the UK’s first seamlessly integrated linear and on demand TV service. How does this expert in broadcast take on his next challenge – how to harness the forces that are changing his industry?

This year’s IBC looks set to have been the last for Richard Halton in his current role as CEO of YouView, the UK joint venture between telecom operators BT and TalkTalk, infrastructure provider Arqiva, and broadcasters the BBC, ITV, Channel 4, and Channel Five.

Halton, who took the helm at the TV platform in 2010 but has been involved in the initiative since 2008 when it was first conceived as Project Canvas, has announced he is stepping down from YouView at the end of 2018. Although Halton does not yet want to comment on what he will do next, he hinted that he will not be moving too far afield.

“It’s a fascinating moment in the evolution of the overall television/SVOD/visual platform market, so there is part of me that is eager to get out there and see another side of the industry. So, I’m not looking to go off and do something wildly different from what I do today,” he says. Halton, who spoke at IBC2018, also feels he is leaving YouView in a good place and is proud of having led the platform from launch to being in three million homes in the UK.

‘Voice is nice because as well as being able to get you to content quickly, it can also recognise the person who is in control, and then you get a more granular view of how content is being consumed’

In the meantime, the seven shareholders have asked him to focus on the next steps for YouView.

“We are in the final stages of agreeing a new framework for the business, a new shareholder agreement between them all, which we’re due to ramp up by the end of March. So we’re trying to accelerate that and do that by the end of the year.”

Halton stresses that the current shareholders are very committed to the business and want to see it thrive and grow. “But they’d like to make sure we’ve got an operating model that is a bit more flexible, as in they can each get different things out of the business rather than it being monolithic… we’re trying to be much more customer centric, so thinking of BT and TalkTalk as customers, rather than having a shareholder mentality.”

The best expression of that, adds Halton, would be if YouView became a software-as-a-service platform, where it actually had a proper commercial relationship with its shareholders.

“That would feel very dynamic, it would feel high-value, and there is an opportunity as well to create a model where YouView can have other customers,” he says, including the other shareholders or external companies. Halton notes that YouView is already working with the BBC in areas such as UHD, and Sony embeds YouView in smart TVs.

Any organisation that Halton decides to join after YouView will be gaining an executive with a huge amount of broadcast industry experience and a strong focus on digital services. After graduating with a degree in English and European Literature from the University of Warwick and working for a short while at Andersen Consulting (now Accenture), he joined the BBC in 1999.

“I was fortunate to take part in lots of exciting moments in the digital evolution of the BBC,” he says.

He was on the launch team for BBC Three, and was then involved in the repositioning of BBC One. He joined the BBC board in 2003 as controller of TV strategy and was responsible for the BBC’s digital TV channel and commercial relationship with production including new media rights. Later, he was responsible for shaping the editorial strategy for BBC television, to reflect changes in audience and market dynamics.

From 2005, he acted as strategy leader for creative future under the then BBC director general, Mark Thompson, leading the development of a pan-BBC strategy for an on-demand age and setting the editorial strategy for the next five years. He was also involved in the launch of BBC iPlayer and played a role in syndication deals for on-demand content, such as with YouTube.

In 2007, he was trying to work out what to do next. “I had been looking at how the BBC’s relationship with BT should evolve. We were looking at BT Vision, we were looking at FreeView and iPlayer, and trying to figure out how you could do something more interesting with FreeView, where it could take more control of the user experience of the TV set.”

However, Halton and his team quickly established that it was going to be impossible to take FreeView on that journey “given the shareholding group it had” (BBC, Sky, Channel 4, ITV and Arqiva).

Project Canvas was then launched, initially with the involvement of only BBC, BT and ITV, as an IP-centric TV platform. “That project became the business that I now run,” says Halton. YouView was incorporated in 2010 and launched just ahead of the London Olympics in 2012.

Halton says YouView’s mission has changed significantly since launch: “We started as a free-to-air service, which could have swallowed Freeview, but in 2013 we took the decision to go more down the route with FreeView still continuing and YouView providing a software platform for BT and TalkTalk.”

Since then the focus has been on creating a future-facing technology platform. For example, in 2017 YouView re-engineered and redesigned its entire platform, rendering the interface in HTML5 and moving more infrastructure to the cloud.

“In term of business priorities, my focus is really on the operating model and funding framework [for YouView] from 2019 onwards, as discussed,” Halton says.

“From a product perspective … we think about content a lot. We’ve just launched Amazon Prime, on the [YouView] platform, so we’re the only linear channel, full-service platform in the UK that has Netflix and Amazon and Now TV. So we’re really focused on the range of content, and we’re going to bring Sky Atlantic to the platform in early 2019 … we’re also looking at how we can enable YouTube on the platform.”

The other focus is on how people find and discover content, “which is YouView’s secret sauce; our seamless discovery of content from multiple providers.”

At IBC, Halton will also be discussing some of his current priorities, including how to drive innovation in the TV market in terms of data, advertising technology, voice control and machine learning – “so looking at how we can exploit the infrastructure we have built,” he says.

Halton adds that voice control, when executed well, is not only a brilliant way of discovering content but can also help with personalisation. “Voice is nice because as well as being able to get you to content quickly, it can also recognise the person who is in control, and then you get a more granular view of how content is being consumed.”

YouView is looking to partner with Amazon on voice in the first instance, and is also working with Google.

“We’re not trying to go it alone,” Halton says. “What we bring is the fact that we’re a broadcaster-backed platform, and so we can help Amazon navigate some of the choppy waters around how content is attributed, how metadata is surfaced effectively, how data and so on is captured.”

In fact, Halton likens YouView’s role to that of a broker between Amazon et al and broadcasters, “because the broadcasters are very nervous about voice. It ‘disintermediates’ them, there’s no UI, there’s no prominence, so we’re trying to say to the broadcasters: look, it’s ok, you can work in such a way that … those principles are protected.”

At IBC, Halton is hoping to engage broadcasters and service providers in a conversation about the use of voice for content discovery to determine where the tensions are, and to find a potential resolution.

Other concerns cited by Halton include the transition towards the connected home, and who owns that home. “The other area we think about a lot is the migration over time towards IP … and figuring out how YouView can continue to offer the best IP-centric experience.”

In other words, Halton may be leaving YouView in a few months’ time, but he looks set to keep his foot firmly on the pedal until he finally departs.