Andy Jones died surrounded by his family after a brave and protracted battle against leukaemia.

Jones began his career in 1982 in Wales working as a TV design engineer before moving to the BBC as a broadcast engineer where he was responsible for maintenance and installation of broadcast systems for the radio and TV stations in Wales. 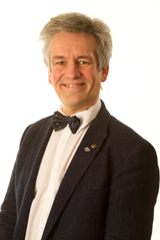 Andrew Jones: “Learn something new and pass it on.”

He spent a further 21 years with the BBC at its Wood Norton Training Academy where he lectured on engineering, line managed video engineer trainers for BBC’s training and development and spent five years as training manager for its broadcast engineering and technical operations.

In 2011, he was promoted to principal technologist at the BBC Wood Norton facility where he lead the development of new technical training and major training projects.

Jones designed and managed the training project for the BBC’s new broadcast centres in London and Salford and was part of the technical design group for the Media City build.

He also consulted across the BBC’s technology projects, procurement processes and specialist health and safety issues, whilst acting as a mentor for BBC engineers working towards professional registration with the UK Engineering Council.

In 2016, Jones joined the IABM as head of training where he lead on IABM’s training portfolio and was responsible for IABM’s university forum and initiatives to deliver technical skills certifications to engineering student awards and initiatives to develop the next generation of talented people for our industry.

IABM chief executive Peter White said: “Andy had a major impact on IABM’s knowledge and educational capability and that will make up part of his huge legacy to us and the industry.

“His mantra was ‘never stop learning’ and he inspired many with his passion for knowledge and its communication.

“Andy was held in the highest esteem by all who knew and worked with him. His knowledge of broadcast and media technology was unsurpassed but despite his penchant for bow ties he was always reflective and considered in his manner.

“He was one of life’s gentlemen and it was a privilege to have known him; we will all miss him immensely. My heart goes out to his wife Ruth and their family.”

Throughout his career Jones spoke at IBC, NAB, SMPTE and IET conferences and was remarked as having a passion for helping individuals and teams learn to get the best out of new technology.

Never stop learning
Jones was an advocate for technology and people behind the innovations to enable the creativity to flourish.

He wrote in a blog post last April ahead of NAB: “The media industry never stands still, because our audience demands its media is always on the move, anywhere, any place any time.”

He was one of the experts on hand at the IP Showcase at NAB and IBC2018 where the team shared the new way of monitoring and measuring performance on an IP network.

He said: “Learn something new and pass it on… Build human intelligence as well as the artificial variety, never stop learning with IABM.”