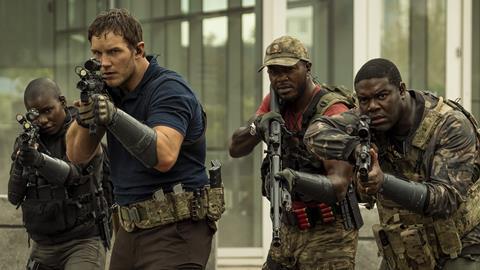 Behind the Scenes: The Tomorrow War

During a World Cup football game in Miami, time-travelling soldiers from the year 2051 appear on the pitch with an urgent message about a global war against a terrifying alien species. Cinematographer Larry Fong ASC explains how he shot the Amazon Prime action movie.

“Chris [McKay] and I wanted the film to feel relatable, especially regarding the present day, home and family sequences,” explains Larry Fong, ASC. “But we also wanted epic scope and breathtaking visuals. So basically, we tried to apply some restraint for half of the film and then cut loose for the rest.” 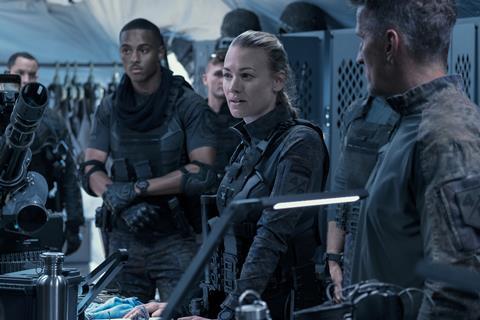 Having shot a number of blockbuster science-fiction and fantasy films in the past, such as 300, Watchmen, Batman v Superman: Dawn of Justice and Kong: Skull Island, Fong was no stranger to shooting movies about aliens and post-apocalyptic battlefields.

“I’m always excited to try and come up with new visual approaches rather than be influenced too much by other movies. I prefer to visualise, dream, meditate, whatever you want to call it, as I go through the script or walk the sets and the locations, and bounce these ideas off of the director, production designer, gaffer, key grip, camera operators, DIT… anyone who will listen. The process is to narrow down and distill things into the best ideas and then figure a way to translate them into a tangible approach on set.”

“We tried to apply some restraint for half of the film and then cut loose for the rest,” Larry Fong, ASC

McKay, who made his feature-film debut with The Lego Batman Movie, was able to use his extensive background in animation to direct a live-action movie where the aliens are, for the most part, created in CG.

“Chris wanted the movie to have a classic vintage look with as much in-camera as possible,” Fong says. “We decided on shooting anamorphic early on to achieve the epic scope and grandeur – not only for the 2.39 aspect ratio, but for the texture that anamorphic glass brings. I used Panavision T-Series lenses that were modified a bit to my specs by Dan Sasaki [Panavision’s VP of Optical Engineering]. It was an easy choice to go with Arri Alexas, which have amazing colour science inherent in their design.”

Additional testing with the lenses and the Alexas helped Fong’s team tune them for the desired flare characteristics ­– “always an important thing for me”, he says. 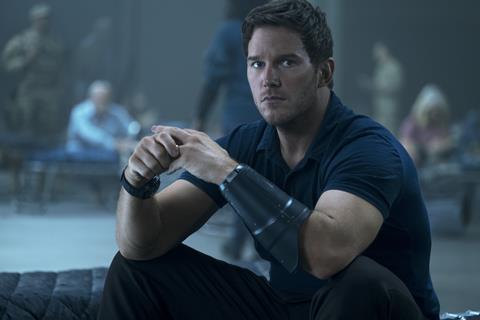 Additional ultra slow-motion shots were made with a Phantom, and Alexa Minis were deployed for helicopter aerials and several drone shots. GoPros captured some surveillance camera-type of shots. The material was principally shot 2.5K. “The studio, post-production and VFX were all good with that. I didn’t have any reason to shoot higher.”

He used a base LUT supplied by Steve Yedlin, ASC. From there Fong and DIT Robert Howie modified it to discover each sequence’s preliminary look. Howie also made sure the dailies matched that vision each day. “That’s an important part of the workflow. Fotokem took care of us very well in that regard.”

On location in Iceland

Because McKay wanted The Tomorrow War to feel real rather than hyper-stylised, he chose to shoot on location and limit the amount of green screen used. That meant shooting in Iceland, which in the story stands in for Russia, on Europe’s largest glacier, Vatnajökull.

Not just on the glacier either – but on its highest peak. “It took at least an hour, in various vehicles, to get there each morning,” says Fong. “My key grip Gary Dodd rigged a Technocrane on skis and snowboards which we towed to the top of the peak.”

“The cold in Iceland is absolutely brutal on the camera equipment,” says Fong, who once shot a car commercial there. “It affects all the electronics and you have to keep the cameras warm because the lenses tend to fog up if you’re not careful.”

A descent into an ice tunnel set required an absolute commitment to an approach, he says. “The only way to move the camera through the small, angled space with the actors was with a Technocrane and we had to determine the exact places for the art department to make holes to push the arm though. Grips had to build scaffolding to get the crane base to the correct height. It takes a lot of engineering and measuring to pull that off.

“There are massive crevasses that go down for hundreds of feet and, if you fall into one, you’re gone. It’s also very challenging because the weather is constantly changing and you only have so much daylight available. We had about six hours of shootable time each day, and then the sun would just crawl across the horizon and go down, leaving us in the dark.”

While much of the film was shot on location, certain key sequences had to be filmed in a studio.

“The light was beautiful… until a storm came in and we were unable to get all our shots. Therefore, we had to complete the scene on stage in Atlanta. Not the ideal situation, but we did our best. My gaffer Jeff Murrell came up with the idea of using a 100K SoftSun gelled warm to simulate the low sun we had in Iceland. VFX, editorial and our colorist went beyond the call of duty to make the sequence work.”

“Some people are afraid to use zooms, but Chris and I agreed it was the perfect moment to include one. It makes the whole sequence feel super tense,” Larry Fong, ASC

A scene of soldiers entering a long, dark, circular stairwell was shot at Pinewood Atlanta because of the control needed to perfect it.

“The scene starts off so quietly and then the music completely stops and you feel all of this tension begin to rise as they’re creeping further down the stairs,” Fong says. “Then, when the last guy looks up and thinks he sees something moving in the shadows, we used a long, slow zoom to stretch that out. Some people are afraid to use zooms, but Chris and I agreed it was the perfect moment to include one. It makes the whole sequence feel super tense and it forces the audience to strain to see what’s up at the top of those stairs.”

Time travel has played a role in countless films over the years, but McKay wanted a unique take on the concept.

“We looked at images of the northern lights and the view of Earth from space, and at one point I showed [McKay] images from the Hubble Space Telescope because there’s something kind of intimate and mysterious about them,” says VFX Supervisor James Price.

“We designed a force field that forms above the draftees right before they jump in time. The travellers slowly rise up, pierce this membrane and begin their journey.” 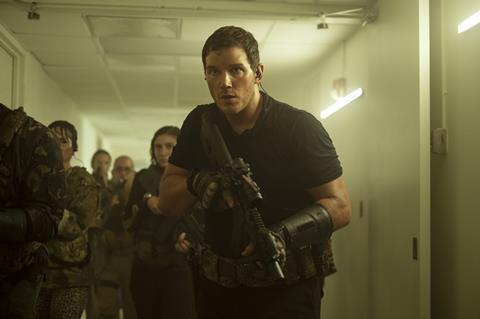 Fong: ’Chris [McKay] wanted the movie to have a classic vintage look with as much in-camera as possible’

We get the first glimpse of this at the beginning of the movie where dozens of people from the future appear out of thin air in the soccer stadium.

To capture the effect, the special effects team ran tests using an underwater cloud tank to simulate time-displacement. “Then we got the bright idea to use a practical wall of smoke instead,” says SFX Supervisor JD Schwalm (First Man, Venom). “We made the smoke thick enough so the camera couldn’t see through it and then one of our stunt co-ordinators rigged the actors on wires and flew them through the wall of smoke. We added a bunch of CG electrical currents in post-production, and when you finally see it on screen it looks as though the actors are materialising out of thin air.”

The army of white spikes

The ferocious extraterrestrial species in the film are known as white spikes, ravenous monsters that hunt in packs. McKay envisioned their skin being raw and covered with psoriasis and pock marks.

“They’re fundamental to the story and if you get them wrong then everything else can fall apart like a house of cards,” Wenham says.

The filmmakers looked at rhinoceros and hippopotamus skin, studied cheetahs and leopards for the way their joints allow them to run quickly, and examined snakes for their ability to unhinge their jaws. Marine predators and insects were also part of the research.

“Shark eyes were my inspiration for their eyes, because there’s something very eerie about black shark eyes,” says Concept Illustrator Ken Barthelmey. The creature’s front arms are based on praying mantis claws and their back plates resemble the shell of a grasshopper.

With the design complete, a full-size creature puppet was constructed, along with several smaller pieces used for specific shots and a couple of animatronic white spikes for something physical for the actors to react to on camera.

Principal photography was in the can two years ago with original release scheduled for Christmas 2020. Not only was release postponed but much of editorial, including recording the score, had to be done remotely.

“Luckily I was able to do the final DI grading in person with colorist Dave Cole, thanks to the protocols in place at Fotokem Burbank,” Fong says.

Production was nearly derailed by the effects of global warming the film is warning about. When scouting locations in Iceland, the production team found several magnificent sites including Anaconda Ice Cave and the Blue Diamond Cave but when they returned a few months later, they found that they had melted away.