Broadcasters keep dancing to the tune of social media

In a world filled with content it’s more important than ever for broadcasters to keep viewers engaged. A tried and tested to way to do this is through having a presence on social media. But how are broadcasters keeping up with the rapid pace? 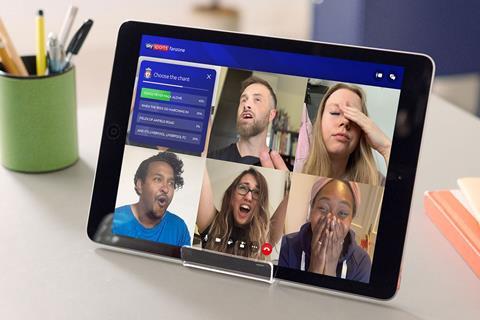 Social media: Broadcasters showing how platforms can be used to share experiences in lockdown

According to recent Nielsen research on social behaviour, 2020 has seen a deluge of social media activity about TV programmes, as viewers reach out to friends and family for a shared experience during lockdown. Firm evidence, if any were needed, to make broadcasters and programme makers realise how crucial the social media world is to their audiences.

“At present this is more important than ever in the absence of a traditional watercooler moment as fans are eager to carry on the conversation about their favourite TV online,” says Chris Evans from FutureSource Consultancy. “Trending on socials is essential for shows to truly become a cultural moment.”  Social media platforms actively encourage broadcasters to tout their content – it’s a win-win after all and the platforms can soak up the advertising dollars. However Evans says it is vital for broadcasters and production partners to provision for social media assets to surround their show and spark not only awareness but conversation online.

Such conversations can be tracked and analysed, perhaps through the use of hashtags or machine learning tools, to provide broadcasters with granular insights into what viewers are finding positive or negative about the programme content or presentation, and as such can feed back into strategies for greater audience engagement.

Making connections
According to Evans such provisioning of social media assets is a simpler process for pre-recorded material, as there is time to create supporting materials to wrap around the core programme either inhouse or using a digital agency. “The challenge is the added complexity of versioning content to optimise for the varying formats of different social media platforms,” he says.

“Live content is more demanding from a technical perspective as broadcasters must ensure that they have workflows in place that enables video to be accessible to digital and social content teams as it happens,” adds Evans.

“Automated metadata logging, captioning, and media asset management can all play a role in accelerating the creation of clips and assets as the action unfolds. It is vital to be agile and reactive with social media posts during transmission to serve up fans with bite sized and sharable highlights that they will keep them engaged and pull in wider viewership.”

There are third-party tools available for rapid engagement over social media. 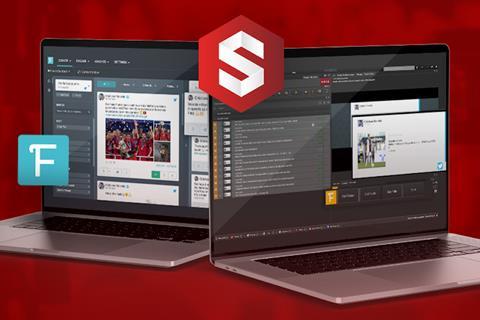 Flowics offers an audience participation platform that enables its broadcast customers to integrate viewer participation (polls, curated comments) and interactive graphics into any type of broadcast or screen. It has recently announced an integration with wTVision, the real-time graphics and playout automation provider. According to wTVision, this integration means that users of its on-air graphics and video controller Studio CG can now follow and curate relevant conversations on Twitter, Instagram, Facebook, FB Live, YT Live, Twitch and WhatsApp, “reacting quickly to the buzz as it is happening live”. Studio CG users can set up rules to filter through these conversations for significant content to then air on broadcasts. Additionally, because Flowics is a cloud-based platform, it can be operated entirely remotely via a web browser.

Inception Social is a story-centric workflow tool from Ross Video that allows a single piece of content to be published across platforms in just a few clicks.  Integrating it with the XPression NLE workflow allows broadcasters to add their branded graphics to the video segments in editing, which allows for branded content on social media prior to a linear newscast being prepared. XPression also interfaces with Inception Social to push content from social media to be presented on the broadcast, such as allowing broadcasters to ask a question on social channels and track responses using hashtags, mentions and geolocation, then display results in onscreen graphics. This means roundtrip access for branded content from social media to the news programme and branded content from the programme to social media.

Conduits to social platforms are becoming a common feature of live production workflows, such is the importance of keeping the audience engaged, particularly for news or sport broadcast.

Away from live, but still offering real time engagement, StoryFormer is a tool being developed by BBC Research & Development for making interactive stories quickly and easily. It’s been designed to allow interactive stories to be created and published without the need for bespoke software development. Using object-based media, it allows programme makers to break all the different parts of a programme down into individual elements to create new kinds of interactive TV shows. Objects can be as large as the audio and video used for a scene in a drama, or as small as an individual frame of video or a caption. The branching narrative format that StoryFormer offers is an ideal fit for engaging users on social media, and it’s possible to send a Tweet, a Facebook message or an email from a Story. An example given by BBC R&D is that in a branching experience, programme makers could add a ‘social option’ to every ending, allowing viewers to promote the tory themselves.

Playing together
Sports, especially esports, is a great place to see social media engagement in action. Apart from esports tournaments in the real world, the latter exists almost purely in digital form, while the big sports broadcasters (now also looking to virtual sports due to COVID-19) have become expert at keeping audiences engaged in pre- and post-match periods, and on second screens during matches, with innovative social media content.

Sky Sports has also added the Fanzone watch party video call facility to its second screen experience, enabling users to host a shared video with up to five people participating during Fanzone-enabled matches.

Outside sport, broadcasters are making their own content more social. BBC Together, a new experiment from BBC R&D, lets people watch and listen to video and audio content from iPlayer, Sounds, Bitesize, News and Sport at exactly the same time.

According to senior R&D producer Dr Libby Miller, the BBC, “wanted to see if technology could bring people together to watch and listen to BBC shows remotely as a shared experience”. Trialled during lockdown period on the experimental platform Taster, a host can send a link to share the content with a small group of friends, family or others that they’d like to join the session. They can play, pause, rewind and skip forward or choose a different programme for everyone to watch at once, all in sync with one another.

Social media churn
This year Facebook’s user base has reached over 2.6bn. While Instagram has less than half that number, that’s still a lot of likes and shares. According to figures by Statista, more than half of the global Instagram population worldwide is aged 34 years or younger. To this youthful demographic, the TV is the second screen. Broadcasters have thus had to be even smarter about how they interact with social media, seeing it more as part of a greater media presence, or ecosystem, rather than just a way to drive audiences to their channels.

However the dynamic nature of social media also has a downside – it’s easy for audiences to become jaded and move on in search of the next big thing. Like digital ghosts, the internet is littered with once-innovative platforms – remember Vine?

Broadcasters thus have to keep coming up with something new to stay relevant and keep engagement high. For example the inventively brief, eye-catching messages of 4NewsWall gifs of Channel 4 News and the Go Figure infographics of BBC News were both once celebrated on social media, but no longer. When creating something, broadcasters and their digital production partners must be fully aware that no matter how enthralling it is, their hot property will be abandoned for something fresher and more exciting after a painfully brisk period.

Despite the demise of Vine and similar platforms, short-form video is still a huge draw in social terms, as evidenced by the worldwide success of video-sharing app TikTok, which claims that one out of four of its users can’t be found on other social platforms. That success, particularly with the all-important Millenial and Gen Z audience, has seen TikTok being courted by broadcasters in droves, and has seen other platforms rush to keep pace, with features such as Instagram Reels being developed.

Through initiatives like Snapchat Discover, social media platforms are now delivering original short form content made by media organisations to their audience. Snapchat Discover publishers include broadcasters such as Channel 4 and Sky Sports, while the platform is in turn moving into their world by introducing Snap Commercials, which will show ads between curated content. TikTok has now launched TikTok for Business to monetise its reach.

Now in a move that brings an ironic twist to the battle for audiences, platforms are starting to develop their own long-form content. It was revealed in August that a group of young TikTok influencers, The Hype House, who collectively have over 150 million followers on the platform, will be starring in their own ‘reality docuseries’. Titled The Hype Life, it’s to be shown on TikTok itself, with other series reportedly set to follow. Broadcasters will no doubt be watching closely.