BT Sport has launched several new functions to boost its viewer experience. James Pearce speaks to COO Jamie Hindhaugh about the importance of partnerships and how technology can innovate live sports. 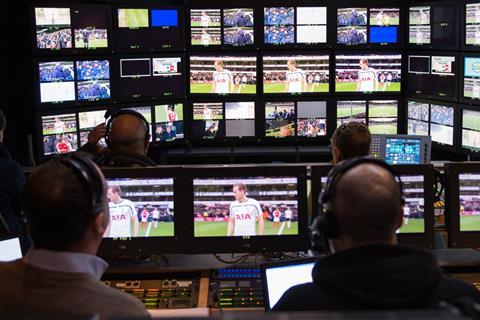 2020 has brought major challenges for sports broadcasters, including changes to how live events are viewed.

The cancellation of major sporting events due to the coronavirus pandemic left the sports broadcasting industry in limbo. With sports one of the most significant types of “event television” left for broadcasters, many turned to new and innovative technology when sport finally returned in the summer.

From remote production to fake crowd noises, 2020 has seen a more reactive adoption of new technology, aimed at making up for the challenge of broadcasting live sport from behind closed doors.

BT Sport was one of the broadcasters at the forefront of this innovation. BT Sport has UK domestic rights to the Premier League and was among several linear subscription TV networks to introduce “shared viewing” to its digital offering, catering to fans forced to watch from home as stadia echoed in their absence.

This came in the form of Watch Together, a digital experience that allows viewers to watch live sport with friends, wherever they are. The service, which is available through the BT Sport app, allows customers using the BT Sport app to watch, see and chat with friends in a split screen view while the match is being played. 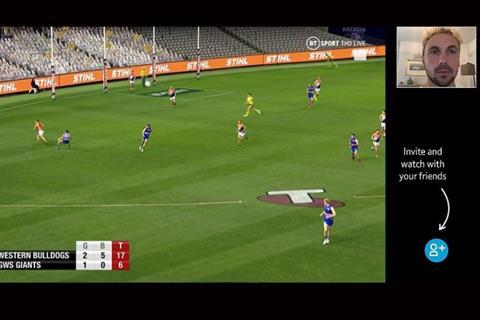 BT Watch Together: Allows you to watch with friends and family virtually

BT brought forward the launch of Watch together. It is part of a wider innovation project that aims to improve the viewing experience for BT Sport customers.

BT Sport chief operating officer Jamie Hindhaugh explains to IBC365: “We’ve launched a range of products that really take the fans to the heart sport and give those experiences around live sport that are editorially credible, and add value to your view and experience.

“This reinforces our approach, which is about the strength of BT Sport - our relationships with our partners - and bringing the best in class into our community to develop and enhance a portfolio of great offerings. We’re really proud of the stuff that they’ve helped develop for us to be able to offer this new service.”

Match of the day

According to Hindhaugh, good innovation and good technology will have refresh cycles – “we all have updates that needs to be made” - and innovation “comes from ideas and partnerships.”

He adds: “I think what this is the why we work the way we do, because you’re bringing people in who are developing brilliant products, but are hungry to build that portfolio and we’re a fantastic window to enable a lot of that.”

To build the new features BT has partnered with several vendors and developers. Finding the right partners was a key step for the broadcaster, according to Hindhaugh.

“Finding the right partners is hard because it’s not just about their technology. It is about the willingness to collaborate, and how we work together because technology you can overcome,” he adds. “It’s about an understanding and pulling together in the same direction.”

The temptation for broadcasters is to “replicate the market” rather than looking to innovate, he explains. But BT wanted to create something new and exciting.

“The key thing is around personalities. The BT Sport church has broadened a little bit now, but we have some fantastic new members of our congregation who are not afraid to challenge but are also able to listen and to influence. And I know for a fact my teams have loved working with these new partners in incredibly challenging circumstances.”

Match Day Experience is delivered in collaboration with BT-owned EE’s 5G network, which has so far provided new augmented reality (AR) features during the network’s live Premier League coverage. Features include real-time and augmented match statistics and a 360-degree viewing experience – built and deployed in collaboration with Tiled Media and Deltatre – that gives them control of in-stadium cameras. 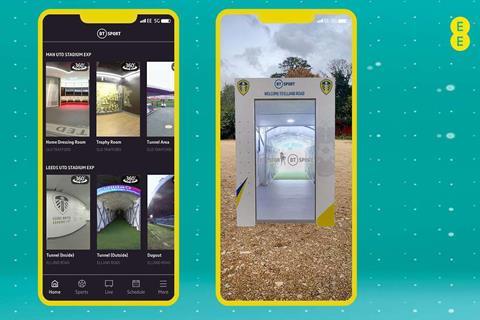 There is also BT Sport’s Stadium Experience developed in partnership with London-based Visualise, which allows users to take virtual stadium tours via the BT Sport app, taking them inside team dressing rooms, dugouts, trophy rooms and the tunnel area.

Visualise CEO Henry Stewart explains: “We’re a virtual reality and augmented reality production agency. Over the past couple of years, we have worked with EA to help launch 5G networks in terms of TV adverts and the technology behind them.

“Recently, we started working with the team in this new update to the BT Sport app. We produce the match day live and the stadium experience. That is the placement of a portal like a doorway that you can walk through into a pre-recorded or live piece of 360 content. It’s also the placing of this augmented reality kind of model of a stadium which is full of all of Ross’s lovely stats and information from the match.”

On working with BT, Stewart says his team had felt “incredibly welcomed” into the fold which made it much easier to implement their solution in a short timeframe. However, it was still a challenge to adapt Visualise’s solution from one normally used on one-off campaigns to be integrated into the BT Sport app.

“It wasn’t just for one big bang and fireworks and then it disappears, but it is actually something which can be used and built on again and again in the future,” explains Stewart. This meant that all of this technology that Visualise made had to be carefully integrated in and then also handed over to BT’s internal teams so they can “continue to work on it and continue to add their own data and content without having to necessarily come looking for us. This means that they’ve got fabulous building blocks to bring more augmented reality and more 360 content deeper into the platform.”

Enhancing viewer experience
Much of the new technology was implemented while the coronavirus pandemic raged across the world. This brought unique challenges to BT’s vendor partners.

“For us, the challenge of this lockdown was significant, but it had two benefits,” explains Paul Hunt, who is executive director at Second Spectrum. “We were able to improve our remote working strategy, whilst also invest more in R&D. 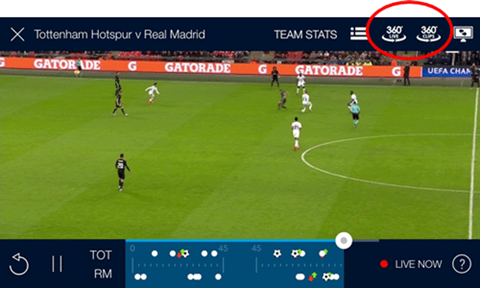 The lockdown “enabled us to spend a lot of time with our engineering team focused on getting this right in such a short space of time” he adds.

Lockdown enabled Stats Perform – a big data company – to “look at how we can collect data and do that remotely, instead of in a stadium, and use AI and machine learning to identify new data metrics that we’ve never seen before” explains Stats Perform account lead Ross Tanner.

This, when partnered with Second Spectrum, “is the exciting part” he adds because “we’ve got our event data that we’ve provided BT Sport for many years, but there’s some great innovation that we’re developing within our internal capacity, but also with the Premier League and with Second Spectrum as well.”

BT has a record of innovation, such as becoming the first broadcaster in the UK to air a live game in 8K in partnership with Samsung last year.

These innovations are not only being introduced to live soccer broadcasts from the Premier League. BT Sport’s Match Day Experience is also being deployed across its coverage of the UEFA Champions League, European soccer’s top club competition, as well as English rugby union’s Premiership, which began its new 2020/21 season on 20th November.

BT also continues to integrate its Watch Together function into its live coverage. Developed earlier in the year with support from social viewing specialists Sceenic, the platform is available via Apple TVs for EE customers whose package includes a ‘large screen access’ add-on.

One key consideration, adds Hindhaugh, is to make sure whatever BT Sport offers is enhancing viewer experiences, instead of just serving as gimmicks.

“Sports fans are demanding,” says Hindhaugh. “We don’t do this just so we can say we’re doing another world first. It is about what the fans want. We have the connectivity from fibre and 5G so we should always be looking at how we enhance that viewer experience.”

Hindhaugh acknowledges that many of these functions will not be mass market. “This is about personalisation, different horses for different courses. The value from this is when you are when you are finally able to go down the pub again. And someone turns around and says, ‘Wow, did you see on that BT Sport? Have you seen that manager mode?’ Or: ‘Well, that 360 camera is amazing’, or: ‘I walked through the doors of Old Trafford last week. Have you seen that?’

“Because that is what drives the perception and credibility of BT Sport. And that is what will make people want to like BT Sport.”