CES 2019: From 8K TVs to the roll out of voice assistants and immersive in-car entertainment, technology, media and telco analyst Paolo Pescatore plots a course through the key media and entertainment trends.

Over the last week, thousands of tech companies have been showcasing new products and services at the annual Consumer Electronic Show (CES) in Las Vegas. 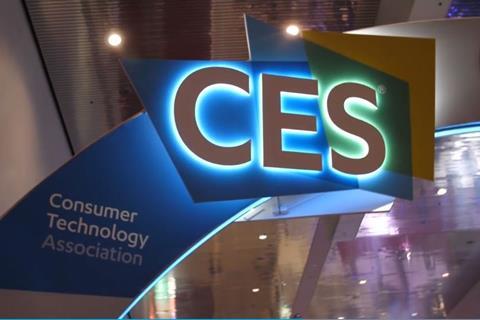 Walking around the vast show floor, it became apparent that the industry is struggling to innovate. However, there were some meaningful announcements and notable demonstrations on the show floor.

Interestingly, the need for tech giants to co-operate rather than compete was notable at this year’s show.

All about 8K
This year’s show will be remembered for TVs, and especially 8K displays. All new TVs will be sleeker, smarter, voice enabled and powered by AI. Manufacturers also highlighted their vision of controlling other devices in the home through the TVs.

LG stole the show with its 65-inch rollable screen, the OLED TV R. Features include clock mode to check the time and weather, frame mode to enjoy family photos shared from a smartphone, mood mode to create a more relaxing atmosphere as well as others including music and home dashboard. For this reason it was constantly one of the busiest stands at CES. Also, at the entrance of its stand, delegates were blown away with an impressive montage of curved OLED screens to create a TV waterfall display; it featured 260 LG OLED digital signage screens, in curved and flat configurations measuring 20-feet high and 65-feet wide, displaying alluring images of curves of the desert, waterfalls, ocean and light.

My review of #CES2019; some of the key takeaways, trends and cool things #IBC365 #UHD #8K #AI #ConnectedCar https://t.co/OPzearYDYl pic.twitter.com/JVDBTpNpUf

Not to be outdone, Samsung presented its new 219-inch diagonal screen, coined “The Wall”, which uses its Micro LED technology. This impressive on stand demo attracted quite a crowd. It offers very high brightness and deep inky blacks, essentially competing against OLED TVs on picture quality. 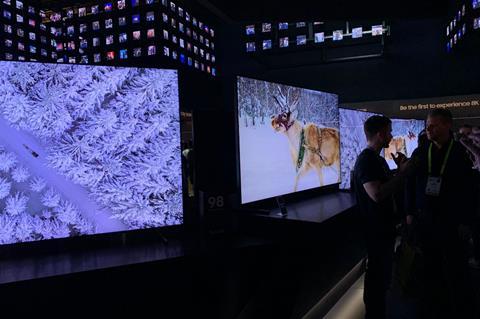 There were other 8K announcements from Samsung, Sony and TCL (Roku powered TV); the latter being the most affordable TV. Unfortunately it feels like the arrival of 8K TVs is happening far more quickly than 4K and will be too expensive for many people. Though most TVs appear to be impressive on a standalone basis, it is hard to assess their true performance when compared with other models from rivals.

The rush towards 8K is unsurprising given that the Japanese state broadcaster NHK will distribute the 2020 Olympics in 8K resolution. However, a distinct lack of 8K content still remains a monumental problem. This is something which happened with 4K and is still true today. Worryingly, the supply chain for 8K is moving much more quickly than it did for 4K. The creation of the 8K Association (8KA) seeks to address this with a variety of objectives including the promotion of 8K televisions and content. The founding members include Hisense, Panasonic, Samsung Electronics and TCL Electronics. However, key companies are missing such as LG and Samsung as well as Amazon and Netflix. The hope is that interoperability and standards will be defined prior to the mass launches of 8K TVs. It might already be a bit too late in light of what we’ve seen at this year’s CES.

Voice rules the show
The slogan ‘Hey Google’ was absolutely everywhere and effectively owned not only the show but also Las Vegas. Google claims that 1 billion devices use the Google Assistant. Unlike Google, Amazon took a somewhat conservative approach compared to Google in terms of marketing, but did announce that 100 million Alexa-powered products had been sold.

Interestingly, both companies have emerged as the default voice assistants for TV manufacturers (and for other consumer electronic devices). Most, if not all, announced support for both voice services. This featured prominently throughout the keynotes during the press day for the main vendors including LG and Samsung. The latter continues to push its own voice assistant Bixby, but will struggle to compete with Amazon and Google. Voice represents the next battleground in the way users interact with TVs as it represents a great way for them to find the shows they want to watch.

Beyond voice, the show also demonstrated other interfaces including ‘Inner Reflection’ (combines gesture recognition and presence detection using ultrasound), proximity sensors from Norwegian company Elliptic Labs (takes actions depending on movements such as pause TV when you leave the room).

This represents one of the few exciting areas of innovation giving users more control. It will allow devices to respond and be aware of a user’s presence. For now, it is all about voice led by Amazon, quickly followed by Google. Most new tech and home products we purchase in the coming months will have voice controls embedded; everything from TVs, speakers and cars to refrigerators, ovens and even the toilet. Voice represents a great way to address the fragmented nature of most homes with users owning devices from a slew of consumer electronic manufactures.

Turning cars into a connected cinematic experience
The concept of a connected self-driving car has promised so much. This vision is still many years away. In the meantime the tech industry is now focussed on the future of in-vehicle entertainment.

Intel and Warner Bros. demonstrated a Batman entertainment experience through a virtual ride and 270-degree entertainment in the back seat of a retrofitted 2019 BMW X5; equipped with a large screen TV, projectors, mobile devices, sensory and haptic feedback, and immersive audio and lights moderated by Batman’s trusted butler, Alfred Pennyworth.

Here is a video of the @Intel and @WarnerBrosEnt future of in vehicle entertainment demo #IntelCES#CES2019pic.twitter.com/azrUlV6XVK

On the Audi stand, the German automotive manufacturer demonstrated numerous entertainment formats towards immersive content on the move. This included Disney based VR games and movies into the car as the next generation drive-in movie theatre.

Immersive media is emerging more and more at CES. Tech companies are all seeking to leverage their computing capabilities to provide users with a more immersive experience; in particular taking sports fans closer to the action. A great example here is Intel who discussed its 3D athlete tracking sports tech during its keynote. This can be applied to other sports and genres.

These demos are still in their infancy, but highlight the exciting opportunities in content and immersive media. Furthermore, it underlines the willingness among tech and automotive companies to work more closely with the entertainment and media industries to bring technology to life. It is all about offering the content users want on any screen, anytime, anyplace, and anywhere. It is a great time to be a content creator given all these new channels and screens to tell stories.

Among the consumer electronic manufactures, Sony positioned itself as a ‘Creative Entertainment Company’; that has all the (hardware and software) assets from content production through to distribution on TV’s to deliver the ultimate entertainment experience for viewers. It unveiled tools to help creators produce content consisted of several zones on its stand such as “Visual Entertainment,” “Music Entertainment” “α” and “PlayStation.”

AI remains a buzzword
The entire tech industry appears to be embedding AI across its products, features and services. Use of AI is still quite limited and needs to move beyond simple algorithms providing users with basic personalised recommendations. There is no question that a combination of machine learning and clever algorithms will benefit the entire media and entertainment industry. 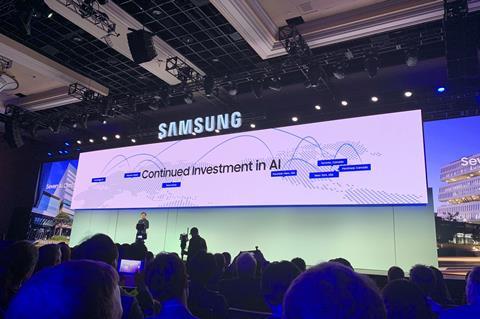 Powered by AI: Samsung has 7 AI centres around the world

Almost every stand was promoting its capabilities in AI, our service is ‘powered by AI’. This slogan featured heavily during the keynotes among the major consumer device manufactures such as LG, Samsung and others. In fact LG is using AI to change the TV picture settings depending on the lighting conditions; such as brightening up a dark area which can be done in real time to improve the image. Whereas Samsung promises to adjust the audio playing through the speakers based upon the content. Personalised audio promises so much, which is something Dolby continues to pursue as well.

All of these moves require faster processors within TVs in order to process functions in real time. Therefore, for more complex operations expect further iterations in the processor chips which will require an increase in power consumption. Faster processors will result in more computing power, which will attract interest from semiconductor and IT based companies.

Biggest announcement of the show
Apple grabbed the headlines without actually being at CES when it announced that an iTunes app will be available on arch-rival Samsung’s Smart TVs. Also, it announced support for its AirPlay 2 media streaming system to TV manufacturers including LG, Sony and Vizio. These announcements were the main talking points over the first couple of days which came hot off the heels of a warning to investors that Apple would miss its quarterly revenue goal by as much as 10%.

These partnerships to extend some of its services on rival platforms, underlines its desire to place more emphasis on services. Furthermore, there was a huge buzz on the show floor as to what the TV service from Apple might look like following Tim Cook’s comments during a CNBC interview. In fact, Apple must step up its focus on all services including music, video, games as well as other areas. This is where the company can use its heritage to innovate further by bringing together a range of services and tightly integrating them with its devices. There’s plentiful scope to be novel, but whatever it decides to do will require significant investment. Fundamentally it cannot solely rely on hardware revenue.

The show very much sets the tone for the year ahead. However, most of the new tech on show will struggle to be commercially viable, let alone make it into people’s homes. Beyond the weird and wonderful, the video and TV industries should be excited with some of the news and key trends that have emerged from this year’s CES.

Content and media owners need to reach new audiences on as many screens as possible. It is clear that the tech industry is seeking to collaborate more closely with the content world to bring their products to life. The vision of content anywhere on connected screens everywhere is something that will come true. This is where a combination of voice, powered by AI and the cloud, delivered by 5G and fibre is happening right now.